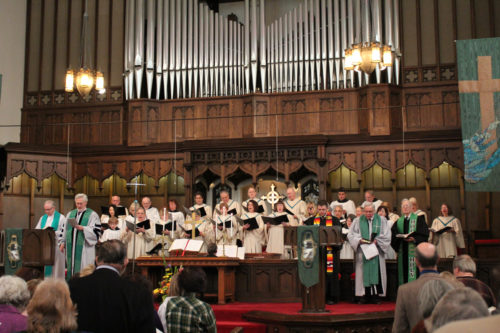 The Rev. John Paddock and the Rev. Rodney Kennedy, far left, are joined by a combined choir of both congregations for the first worship service together. Photo/Greg Sexton

[Diocese of Southern Ohio] The challenges were real, but the opportunities for a bold experiment in ecumenism outweighed them when the clergy and congregations of downtown Dayton’s Christ Episcopal Church and First Baptist Church worshiped together for five weeks in January and February.

When Christ Church learned that demolition of two of its deteriorating chapel walls would block the main and only disabled-accessible entrance to “The Great Lady of First Street,” the Rev. John Paddock, rector, immediately called his friend and colleague, the Rev. Rodney W. Kennedy, pastor at First Baptist, to ask if the Episcopalians could use space at First Baptist during this phase of the building project.

What Paddock had in mind was the Christ Church congregation worshiping at noon or later on Sundays. But when Kennedy suggested that the two congregations worship and do Christian education together, Paddock eagerly accepted his invitation. 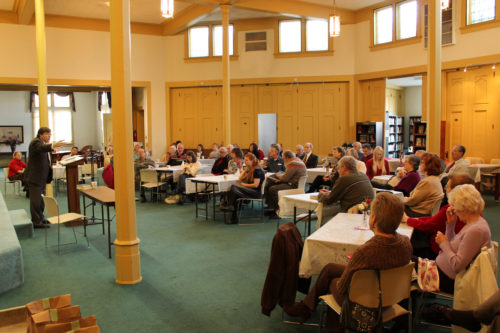 The Episcopal and Baptist congregations joined together for Christian education as well as worship. Photo/Greg Sexton

“John and I are not only friends and colleagues, but we share a passion for social justice and racial reconciliation. Our joint worship was a natural for both of us. For a number of years, the rest of the First Baptist staff and I have worshiped at Christ Church every Wednesday, and the Order of Worship at First Baptist Church already came mostly from The Book of Common Prayer,” Kennedy said.

On his first Sunday in the First Baptist pulpit, Paddock said: “Different polities, different traditions, different amounts of water used in baptism, different ways of gathering and praising God. Sharing worship? How’s that work? Well, we’re going to find out. It’s so intriguing that both the Baptist and Episcopal press services and The Christian Century magazine are asking questions about this experiment. They’re really interested in how it will turn out. I can’t wait to find out myself!”

Each pastor approached the combined worship with his own particular hopes. For Kennedy, it was “that we would realize our commonalities as fellow Christians, and I wanted my congregation to experience the strength, consolation and meaning of weekly Communion.”

To what extent was that hope fulfilled? “The congregation responded in magnificent ways, but they weren’t ready to continue weekly Communion,” he said. “At least the possibility is now part of our conversation. When a church evaluates her practices, there is always a chance for genuine change.”

A representative response from the pews came from Linda Brown, a longtime First Baptist member, who said, “What really impressed me was the ease with which we came together as one body to worship Christ our Lord. An added energy was present. As the weeks went on, when I walked into the sanctuary, I didn’t see Episcopalians or Baptists. I just saw the family of God.”

Paddock’s hope was “that no one would be too put out over the five weeks that we would be out of our building. I was telling folks to think of it like going on a field trip. And the responses were overwhelmingly positive. By the end, people were trying to find excuses to keep going. The choirs are plotting reunions.”

Christ Church parishioner and choir member Carole Ganim noted, “Many of us in the two churches know one another in other contexts: neighborhoods, work, community activism. We live, play and work together and share common interests, so worshiping together does not seem unusual, but rather a natural development and a welcome part of community life. And I loved singing with a big choir. We all want to do more of this.” 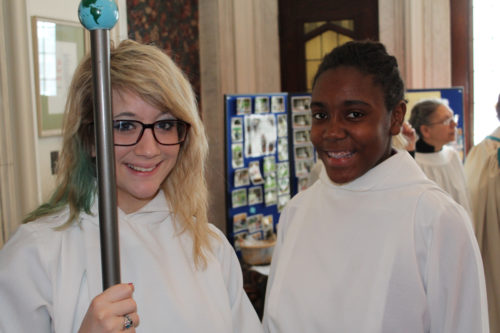 Youth from both traditions served at the altar during the combined services of Christ Episcopal Church and First Baptist Church. Photo/Greg Sexton

Kennedy and Paddock agreed that their greatest challenge was working out the logistics of consecrating and distributing the elements, which included wine and grape juice, during Communion. According to Kennedy, this was the first time wine ever was served at First Baptist Church.

“It got a whole lot easier once we clergy relaxed about it and trusted the Holy Spirit and the people to work it out,” Paddock said. “Isn’t that always the way?”

For Kennedy, the most memorable aspect of the experience was “the smooth integration of word and table. So powerful. We already pretty much used Episcopal worship, but to participate in it fully lifted me on high.”

What resonated for Paddock were “the joyous, full sound of the combined choirs, the full church and genuine hospitality – every week there were numerous expressions of thanks to us for coming to First Baptist Church.”

While acknowledging the role his and Paddock’s long-term friendship played in the successful collaboration, Kennedy said credit belonged “mostly to the Christian faith of two progressive churches that embrace hospitality, love of neighbor, openness to diversity and mutual respect.”

Enthusiasm for the experiment was contagious and ongoing. Paddock said. “Local interest is amazing. Just today, my dentist’s receptionist quizzed me about ‘the worship with the Baptists,’ and two days ago a Methodist pastor in a coffee shop wanted to know how it had gone.

Collaboration and cooperation are so rare these days, when something like this occurs, it’s real news.”

As for the broader ecumenical implications of the collaboration, Paddock reflected: “When we can figure out how to praise God together, not in some watered-down way, but out of the depth of our separate traditions, then we can experience a true gift.”

This article first appeared in the April/May issue of Interchange, the publication of the Episcopal Diocese of Southern Ohio. Mary Thomas Watts lives in Wilmington and is a member of Christ Church, Dayton.