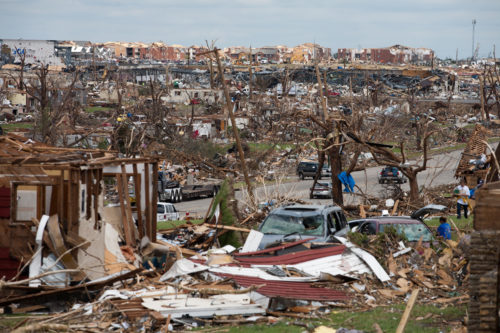 [Episcopal News Serve] For those living in what is known as Tornado Alley, this time of year is tornado season. On hot, humid days, people live with one eye on the sky, watching the clouds, and many communities have gone through the heartbreak of a tornado’s destruction and resolved to rebuild stronger.

As Moore, Oklahoma, begins to pick up the pieces after the massive May 20 tornado, a town 225 miles north on the alley is still coming back two years after one of the deadliest tornadoes in United States history.

The EF-5 ripped apart Joplin, Missouri, killing 161 people and injuring more than 1,000 on May 22, 2011. Today Episcopalians across the state and beyond are helping to rebuild the city.

In one example, St. Philip’s Episcopal Church in Joplin, Grace Episcopal in nearby Carthage and All Saints Church in Nevada about 60 miles to the north, along with the dioceses of West Missouri and Missouri, have led the effort to build a home for a Joplin social service agency to use for families that are moving away from domestic-abuse and substance-abuse situations.

They are scheduled to turn over the home to Lafayette House July 20. 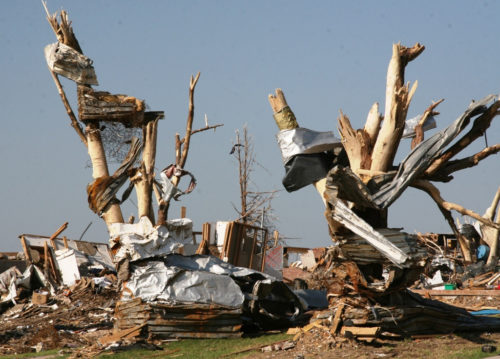 The EF-5 tornado that hit Joplin, Missouri, on May 22, 2011 left these denuded trees standing on the east side of Joplin High where they collected debris from the heavily damaged school. Photo/ U.S. Army Corps of Engineers, Kansas City District, John Daves

The Joplin tornado damaged or destroyed thousands of houses and businesses. A small cottage that Lafayette House used for single women in need of transitional housing was heavily damaged but was able to be repaired, according to the Very Rev. Steve Wilson, Grace’s rector.

However, the agency had long needed a place for families, and “it was pretty clear that one of the social inevitabilities [after a major disaster such as this one] was a real increase in domestic violence,” said Wilson. Thus, the need for such housing would only grow.

“The economic burden that the tornado incurred happened to fall on people who likely had fewer resources of their own to deal with the aftermath of it and that was another factor in the diocese’s decision to do this particular project,” Lyon said. “It was a near certainty that the people served by it would be people who had fewer of their own resources to bring to bear than other persons might have.”

Then add the psychological and spiritual trauma of knowing that in a matter of 20 minutes the storm killed 161 in a county whose population was about 100,000.  “That’s a massive impact,” Wise said.

The Rev. Frank Sierra, rector of St. Philip’s in Joplin, said that Lafayette House has seen a 75 to 85 percent increase in clients since the tornado.

The site for the new house is two blocks north of the path of the tornado’s most severe damage, the area Wilson called “the devastation zone.”

According to a Storm Event Survey issued by the National Weather Service Forecast office in Springfield, Missouri, the tornado, rated EF-5 on the Enhanced-Fujita Scale, traveled 22.1 miles on the ground. “The six or so mile track within the City of Joplin was by far the most intense and devastating,” wrote Bill Davis, meteorologist in charge of the Springfield office.

Numerous well-built homes and businesses were “swept from their foundation, crushed or pan-caked in place, or blown and piled into other destroyed structures and debris,” he said. 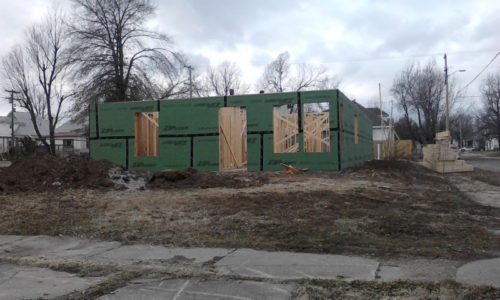 This how Rose Cottage, a transitional home for single women and their families that are moving away from domestic-abuse and substance-abuse situations, looked early in its construction. Photo:Melinda Wilson

In all, 6,954 homes were destroyed, 359 homes had major damage and 516 homes had minor damage. “The wood framing from most homes disintegrated into small pieces,” according Davis’ report. “This caused thousands of deadly projectiles.”

Nearly every business in a six-block stretch of Main Street was heavily damage or destroyed, as were a number of big-box stores on a commercial strip in eastern Joplin. The high school and the medical center were also destroyed.

More than 15,000 vehicles of various sizes and weight including buses, tractor trailers and vans were tossed over 200 yards to several blocks, with some being crushed or rolled beyond recognition, Davis said, adding that some owners never found their vehicles.

“Some of the vehicles were compressed and wrapped around the few remaining trees, while some were rolled into balls. Main steel roof support trusses were rolled like paper, and main support beams twisted or curved,” the report continued. “Portions of trees that remained standing were debarked and denuded.”

The storm tore parking lot asphalt from its base and tossed the chunks across streets in some cases. It also tore up 200 to 300 pound concrete parking stops that were anchored into the asphalt with rebar, and tossed them 30 to 60 yards.

“There were also some interesting features such as a wooden chair with four legs embedded into an exterior wood and stucco wall, and a rubber hose impaled through a tree,” Davis noted.

The Rev. Lauren Lyon, secretary of the Diocese of West Missouri, said the devastation was “unbelievable.”

Sixteen St. Philip’s households were hit by the tornado, according to Sierra. Twelve lost their homes and four their businesses. Ten other parishioners’ homes had minor damage.

“Everybody’s back in suitable housing and we’re glad of that,” Sierra said, adding that some people have only recently moved back in.

Shortly after the storm people across the diocese and the church wanted to help and Lyon said they were told that monetary donations would be best because they could be applied to a specific project or projects as needs were discerned.

Donors contributed just more than $100,000 in response to the diocese’s call, according to Lyon.

“We’re blessed by the support that the greater church has given us,” Sierra said.

About a week after the tornado, clergy and parishioners from the three Episcopal congregations met with some members of the diocesan leadership to begin deciding “what we thought we could do both immediately and long-term that would be helpful,” according to Wilson.

Among the ideas: garage sales where all items were free, connecting a defunct nursery with trees to donate with the agency running a program to help replant trees in Joplin and finding a way to help with what was an intense housing crisis in Joplin.

By that time, many agencies with expertise in house-building, such as Habitat for Humanity, were responding. “They were all on the ground making plans and we didn’t want to try to compete with them, particularly because we don’t have the resources to try to do that,” Wise said.

It was during that conversation that Grace parishioner Katie Platt, who worked as a counselor at Lafayette House, suggested that a transitional house would be a “more long-term solution for more families,” Wise said. 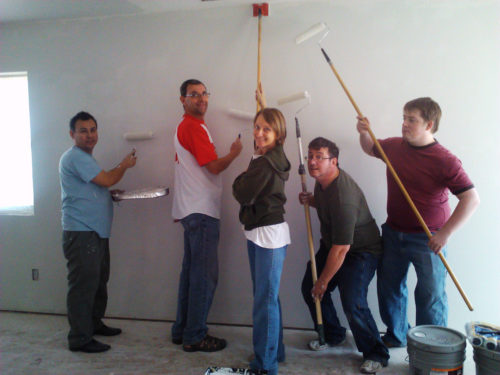 The land was already vacant and the Rev. Ted Estes of All Saints, who says he’s a “local boy,” negotiated the purchase of the property for what will be called the Rose Cottage from James Herron, the grandson of the owners of Rose’s M

arket. The market sat across from a school building which is now Lafayette House. Students used to come across the street to the store to buy candy, according to Wise.

Estes said that when he explained to the owner that the Episcopalians wanted to put a shelter for domestic-violence victims on the land, Herron “graciously sold us the property for a lower price.” A gift from the Diocese of Missouri helped with the purchase, Estes said.

Then came a lengthy building process whose hurdles included finding an available contractor and finding one who could deal with the paperwork that came with a constantly updated set of local building codes.

Jeff Neely, an Episcopalian who is a Carthage-based contractor, drew up the plans for Rose Cottage, donating his work. The three-bedroom, two-bath house has above-ground poured-concrete “safe room” designed to provide shelter from tornadoes.

The house was built using the roughly $100,000 donated to the Diocese of West Missouri, according to Lyon, and the diocese’s Episcopal Church Women have been gathering softgoods such as sheets and towels, dishes and pots and pans, as well as small appliances. ECW is also soliciting congregations throughout the diocese to furnish the house, Wise said. Members of the parishes have helped paint the interior, and landscaping – including roses for Rose Cottage – is planned as well.

ECW has taken on Rose Cottage as an ongoing project so that the families who spend time there will be able to take certain softgoods with them when they move into their own homes, according to Estes. They will set up a registry at a local store so that donors can help buy replacements for the next families, he said.

All those involved said it will be a joyous time when Rose Cottage officially becomes part of Lafayette House on July 20, even though it has been a somewhat frustrating process because people wanted to accomplish something helpful much sooner than two years after the tornado.

“We do understand why and we do want to get this done right but there has been some frustration in that Joplin as a city is coming back but it’s still not back,” Wise said.

Lyon said those involved have learned that “the process recovery and rebuilding is a slow one that requires a tremendous amount of faith and commitment to a purpose. Rebuilding after a disaster of those proportions simply can’t happen overnight and people take time to heal over that; communities take time to heal from that.”

Two years later, the healing is still not complete. Wise, who calls Joplin “my big city,” said that when he goes there to shop or eat out, it’s his impression that “the whole town is depressed as if the city is in a permanent state of PTSD.”

It doesn’t help that the tornado was not an altogether unusual event. Heavy storms moved through the area over the May 18-19 weekend this year and the National Weather Service issued a tornado watch May 20 for 26 counties in Missouri, including Joplin’s. That’s the way life is this time of year in Tornado Alley.

But, Sierra said, “If it happens again, we will deal with it. God will be with us. He has been with us through this time.”