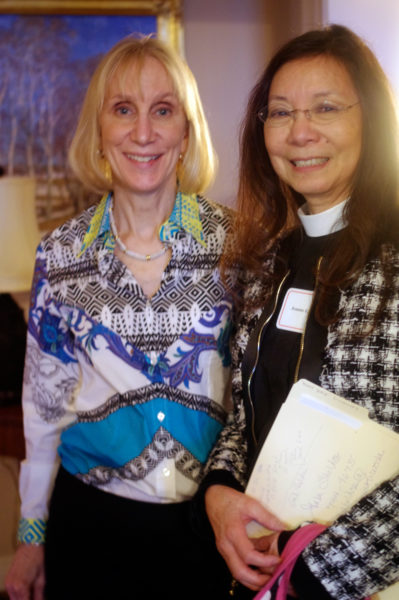 [Interchange] Quietly, her face filled with sorrow, a battered woman confesses, “I shot and nearly killed my husband.” The viewer is close, as if leaning across the kitchen table to catch her words.

Shelia is one of four Ohioans who share their stories in the 26-minute documentary “The Right Track,” created by the Rev. Noel Julnes-Dehner. The film premiered May 21 at the 20th Century Theater in Oakley, Ohio, and will be broadcast later this year on television.

“‘The Right Track’ is a portraits-driven documentary about the struggle between justice and redemption as experienced by people who have committed crimes, served time and have returned to society,” said Julnes-Dehner. “The goal is to bring the people experiencing this alive, and in front of viewers, because we as citizens have decisions to make. Other people are going to prison, but we are all affected.”

Moved by the stories of the Rev. Jackie Burns, who is helping Christian ex-felons rebuild a constructive relationship to society, Julnes-Dehner decided to give faces to the statistic that more than 2 million Americans are incarcerated. A seasoned filmmaker, she won a significant grant for the project from the Ohio Humanities Council to help cover the costs. Canon Joanna Leiserson of Christ Church Cathedral in Cinncinnati, which sponsored the film, has written a study guide.

Reaching out to Cincinnati nonprofits who work with released prisoners, Julnes-Dehner found four people whose stories spanned the arc from “crime to point of change and battles for a stabilized life as returning citizens,” she said. She alternates the narratives of the four ex-prisoners with those of Hamilton County judges Nadine Allen and Norbert Nadel and prosecutor Joe Deters.

“I had read things about criminal justice in the papers, but it’s not as powerful as meeting people. The film doesn’t have a point of view: It’s to promote discussion. What are the values and principles that inform our laws?” Julnes-Dehner explained. How are justice and redemption defined by the Ohio legal system and by popular opinion? “How do Ohioans balance a second chance with personal shortcoming and recidivism?”

The impact of these first-hand stories was powerful in a preview shown April 14 at the home of Cincinnati philanthropists Cathy and Tom Crain, who hold salons to explore current issues. Their living room was packed with Cincinnati leaders including Diocese of Southern Ohio Bishop Thomas Breidenthal, several City Council members, Judge Allen, County Coroner Lakshmi Sammarco and staff from major nonprofits who strive to prevent crime or help people overcome the barriers created by having a criminal record.

Moved by a brief excerpt of the ex-prisoners’ stories, the group dove into passionate sharing of news and hopes. Dr. Edward Latessa, a University of Cincinnati criminologist whose research has been key in Ohio’s criminal-justice reforms, described the factors in recidivism and the implications for choosing the best sanction for offenders in different risk categories.

Allen shared her joy over the fact that new state law has expanded her ability to award expungements, plus the option to review ex-offenders one-by-one and issue certificates of employability, making previously mandatory barriers to employment discretionary and protecting employers from the threat of negligent hiring suits.

Hamilton County re-entry director DeAnna Hoskins reported on new teamwork between her office, the university, Cincinnati Works and the county’s newly elected Sheriff Jim Neil to find appropriate followup for each individual convicted of crime. She particularly commended the new handling of child-support delinquency that emphasizes keeping parents in their jobs rather than locking them up, where they have no way to care for their children.

Julnes-Dehner designed the documentary to be a perfect length for a discussion in a church, school or civic group. Any church could invite public officials and nonprofits to a forum like the Crains held, using the film as a springboard. “The documentary offers no solutions but a jump-start for discussion about what Ohioans value and changes that could be made to benefit our communities,” said the filmmaker.

Dave Eschenbach, a leader of the cathedral’s weekly 5,000 Club community dinner, was galvanized to learn of the services available for ex-offenders in Hamilton County. “Many of these agencies could help the people we see every week,” he said. “I’m planning on inviting them to meet with our guests, so we can serve as a better resource.”

— Ariel Miller is the executive director of Episcopal Community Services Foundation in the Diocese of Southern Ohio. This article first appeared in the April/May issue of  diocese’s publication, Interchange. For more information about “The Right Track,” contact the filmmaker, the Rev. Noel Julnes-Dehner, at njulnes@gmail.com.