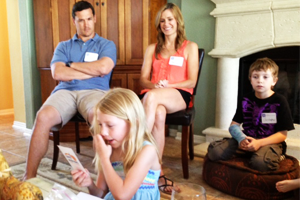 A child participates in Sharing Faith at a special
family event in Pearland. Photo: Diocese of Texas

[Episcopal Diocese of Texas] More than 3500 members of churches in the Diocese of Texas and the Diocese of West Texas gathered in homes last Thursday, May 16, to share a meal and share stories of their faith. Episcopalians across Texas came together in groups of eight to 12, and engaged in a faith conversation.

Sharing Faith began in the Diocese of Texas in 2012, fashioned after Interfaith Ministries’ Amazing Faith Dinners in Houston, where people of different faiths gather for a simple meal and answer questions about their faith journeys. The Diocese of West Texas joined this year and there has been interest from the Diocese of Toronto for next year’s event.

“When this many Episcopalians gather at the same time, strategically to share stories of their faith, it is very powerful,” said Bishop Andy Doyle of Texas. “People from the same congregations got to know one another on a deeper level and met others from nearby churches.”

In its inaugural year, 25 percent of the Diocese of West Texas average Sunday attendance participated.

“This is a great number, a great representation of our members, and we are thrilled with the initial response,” said Bishop Gary Lillibridge of West Texas.

When St. Francis by the Lake in Canyon Lake decided to participate in the Sharing Faith dinner there were some uncertainties, so the vestry decided to model a dinner conversation in lieu of a sermon one Sunday in April. 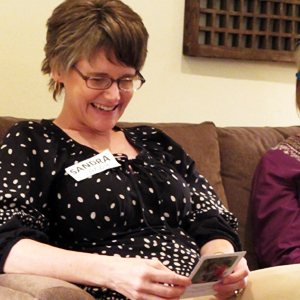 The vestry set up a dinner table in the front of the nave, and sat down and answered questions on the prepared set of cards that are used at each dinner. The congregation heard the questions and listened as each vestry member delivered a personal response.

The Rev. David Chalk, rector of St. Francis, said that the pre-event went “very well.” One church member told him, “You should have warned us there would be tears this morning.” Chalk said, “We had a visitor that Sunday who stood up and told us she had not been to church in five years after her son was killed by a drunk driver. She said she’d never seen anything like this in church, but on hearing our conversation, she found the courage she needed to return to church.” This was the visitor’s first time to attend St. Francis, and she has met with Chalk and the vestry and plans to join their community.

Held on the Thursday evening before Pentecost Sunday, when the Holy Spirit was given to God’s people, the Sharing Faith Dinners are modeled as a time for participants to answer what difference the Holy Spirit has made in their lives; what impact faith has had on their lives. Questions are fashioned to help people articulate their experiences in a thoughtful way.

At an event in southwest Houston, parishioners of Grace Episcopal Church gathered at the Rev. Gena Davis’ home. Ten participants shared a Mexican food dinner at two tables and then gathered in the living room to share their stories.

Sandy McKneely was relatively new at Grace before she agreed to take part in the dinner.

“I’m a pretty assertive person, so I don’t know if every newcomer who had only been to church two times would have the courage to sign up and go to somebody’s house that you hardly know. But for me — I am at a point in my life where I am needing friendships in the faith community, and I thought that would be a good way to start to make some friendships,” McKneely said.

Participants shared stories of great joy and pain, moments when they questioned their faith, and moments when they were affirmed in their beliefs. Friends shared tears and tales as they learned about each other in a new, deeper way.

“On Saturday night before I went to bed, I was thinking about going to Grace the next morning. I was thinking about seeing those people and I knew their names,” McNeely said. “That was an indicator to me that I made some connections, and it certainly makes going back more comfortable. I learned that Grace is a place that I want to return to.”

At Christ Episcopal Church, San Antonio, a group of young adults and College Missioner Allie Melancon attended and took some college students from other denominations. Melancon said what they took away the most is the determination to gather again and not wait for the church to say, “OK it’s time to share faith again.”

In Pearland, south of Houston, organizers at St. Andrew’s Episcopal Church adapted special questions for children and held family style Sharing Faith dinners throughout the weekend. Children were even given time to create a response to questions through drawing pictures.

In the small East Texas town of Henderson, young children came to St. Matthew’s Episcopal Church in their pajamas, were fed dinner and had a program of their own while their parents participated in a Sharing Faith dinner in the parish hall. The Rev. Patsy Barnham said it was important to make it possible for young families to participate and allowing kids to come “ready for bed” was helpful to her congregation.

In homes and churches, and other creative places, Episcopalians across Texas learned a great deal about each other as well as themselves through the simple act of sharing a meal and sharing their faith.

The Sharing Faith dinners tradition will continue to grow in Texas and beyond. Visit epicenter.org/sharingfaith to learn more about the program. Or contact Carol Barnwell at cbarnwell@epicenter.org.