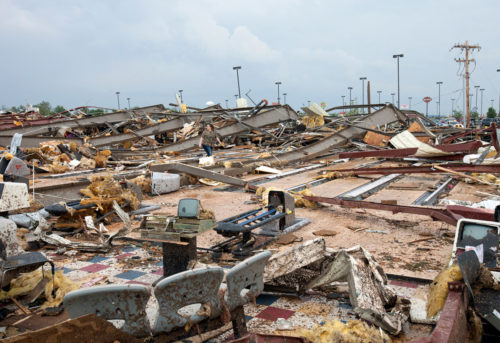 A woman walks through debris after a huge tornado struck Moore, Oklahoma, near Oklahoma City, May 20, 2013. A massive tornado tore through the Oklahoma City suburb of Moore, killing at least 24 people as winds of up to 200 miles per hour (320 kph) flattened entire tracts of homes, two schools and a hospital, leaving a wake of tangled wreckage. Photo: Reuters/Richard Rowe

[Episcopal News Service] Episcopalians and others from across the globe reached out May 21 in prayer and support for Oklahomans, still reeling from a massive tornado that had injured hundreds and killed dozens of people, including 9 children, the day before.

“This is the first full day since the tornado and a lot is still evolving, information is still developing. The key is to make sure we can do what we need to do and provide support and resources to those who need them,” said the Rev. Canon José McLoughlin, canon to the ordinary for the Episcopal Diocese of Oklahoma, who forgot it was his birthday until someone reminded him.

“Imagine someone living in a neighborhood, a community, and all that gone, and seeing nothing but slabs where a neighborhood, and homes were, and where kids played,” he said during a May 21 evening telephone interview with ENS.

“It was hard to really focus or think about it being a birthday with so much going on and people in need, and figuring out all the things that need to be done.”

He had spent much of the day between two extremes: grappling with the sheer immensity of the destruction and a staggering outpouring of love and offers of support from around the world.

“It’s been remarkable. For the last 24 hours, especially, it’s been overwhelming, the amount of communication we’ve received from people ready to do whatever whenever” via e-mails, text messages and phone calls.

“The church has been amazing, from the presiding bishop reaching out to Bishop Ed Konieczny and the people at ERD (Episcopal Relief & Development), to parish priests — it’s just been amazing, the genuine outpouring of concern and genuine offers to help.”

[Episcopal Relief & Development has posted a page of resources for tornado relief here.]

McLoughlin said he and other diocesan staff had received expressions of concern from as far away as “Japan and Germany and Dubai … (and from) folks throughout the Anglican Communion” and from all levels of the church.

Right now, the diocese is still very much in assessment and short-term recovery response mode, he added.

“We’ve been cataloging every person who’s called in, what they’re offering, what they can do, just as we’re cataloging needs from parishes and priests to make sure we can be prepared as the days go on, because the real challenge is going to come when the media leaves and the work continues, and to make sure who’s available to help us,” he said.

As stories of heroism and service emerged, he celebrated the resiliency of Oklahomans, many of whom are beginning to shift from shock and rescue to recovery and helping one another.

Local clergy were still attempting to contact parishioners and to account for the status of all their members. The diocese offered immediate assistance to those in need of lodging, food, clothing, personal items and other essentials, he said.

The American Red Cross and other first responders were still keeping people away from some areas, “so I suspect in the coming days, once they’re no longer doing any recovery and when the clean-up starts, we’ll be securing people to help in clean-up efforts,” he said.

St. Mary’s School in Edmond had begun coordinated efforts to collect water and other comfort items such as toys and stuffed animals, but local agencies have said the immediate need is for financial assistance, the Rev. Bob Story, rector of St. Mary’s Church, said May 21.

“We’ve contacted two different agencies, the regional food bank and they’re telling us they need money,” said Story, who knew of two families displaced by the tornado. “They don’t have a need for other things right now; it creates a storage problem.”

And, while many people want “to do more than just write a check” at the present time, “the regional food bank in Oklahoma City is so well-coordinated now that they have a very precise knowledge of what they need and in order to fulfill that need, they just need money because it gives them the most flexibility,” he said.

The church had held an 8:30 p.m. prayer vigil the previous evening, “to express our grief over all the children who were killed,” he said. “We sent out an e-mail to the parish and about 15 people showed up spontaneously.”

Other vigils, including a 7 p.m. music and worship service “open to everybody” at St. Paul’s Cathedral in Oklahoma City, were planned for May 22.

“As people of faith, we can do a number of things, the most important of which are to offer our prayers to God and to support those agencies giving disaster relief,” according to a statement the church released.

“All donations will be directed to Episcopal Relief & Development for their work on our behalf to support the victims,” according to the statement.

Ironically, McLoughlin was headed to the airport the day the so-called “monster” tornado hit (May 20), to attend an Episcopal Relief & Development disaster preparedness training session planned in St. Louis.

Thinking about the May 19 storms and tornadoes that damaged some suburban Oklahoma City areas, and hearing radio weather reports, “I got a sense of what was happening,” he recalled.

“Something just didn’t seem right. I got to the airport and I never got out of my car,” he said. “I came back to the office and never left, and then the tornado struck.”

Last night, at the end of a very long day spent responding to such immediate challenges as property and other assessment, insurance assistance, cataloging resources and offers and creating a financial infrastructure to receive donations, McLoughlin shifted his focus.

“I spent the evening with my family” as he turned 44, he said. “The irony is, I’m sitting here at my house (in Edmond) and it’s a beautiful sunny evening, knowing that in just a matter of 40 minutes drive, how much damage was done, so much devastation,” he said.
“For some people, for a lot of people, the sun hasn’t started shining yet. It feels very raw.”

Once the media spotlight is gone, he hopes support and assistance will continue for what promises to be an extended recovery period.

“It’s clear this is going to be a long process. Just the extent of the damage, the number of homes that were destroyed, the businesses, schools – three schools were impacted, one was completely demolished. Just considering the amount of time needed to rebuild neighborhoods that are completely gone, the time needed to bring that infrastructure back … there’s a long road ahead for people to make the decision whether they’re going to rebuild.

“But,” he added, “Oklahomans are very resilient; they’ve been through tragedy before. These are hearty folks who stick together and help each other out. We’re blessed to have people committed to do whatever is needed.”