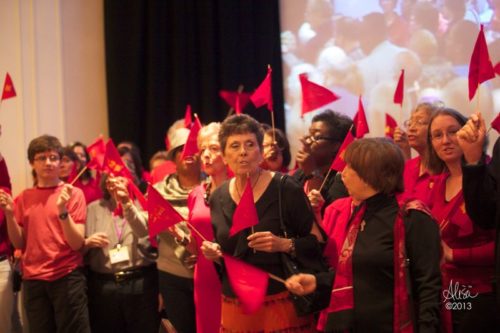 Members of St. Catherine of Sienna Episcopal Church in Missouri City, Texas, arrived at a Diocesan Council meeting earlier this year dressed in red and waving red flags to celebrate the completion of their 14-year journey from mission to parish.

[Episcopal Diocese of Texas] A sea of red – that’s how one might describe the nearly 150 members of St. Catherine of Sienna Episcopal Church in Missouri City as they marched into the Episcopal Diocese of Texas’ 164th Diocesan Council meeting. They proudly displayed their church banner and sang “Soldiers of the Savior,” an original composition by their music minister, Barbara Vestal. Smiles were on their faces, and joy was in their hearts – the congregation had waited nearly 14 years to be elevated from mission to parish.

“Having been at St. Catherine’s since November of 1999, first as children’s minister and now as music director, I can honestly see that the hand of God has been moving us forward spiritually, creatively and lovingly in his time,” Vestal said.

The congregation’s journey began with a Eucharist celebrated the evening of July 3, 1999, at the vicar’s home in Sienna plantation. Twenty people gathered for that first celebration of a newly formed church, which would live into the “via media” theology of the Episcopal Church.

The Rev. Vincent Uher, the founding vicar, loved music, so it always was an integral part of services. Hospitality time followed worship. And the new congregation expanded quickly: After several weeks, it outgrew the vicarage and moved to the YMCA in Missouri City for Sunday worship, spending time before each service changing a bare space into prayerful area.

Occasionally, when there was another event at the Y, the congregation had to worship elsewhere – someone’s home, a local park – wherever members could find a place. They called themselves the “church on the run.” This was before the prevalence of Internet use, e-mail and texting, so phone trees were the preferred method of communication about where the congregation would meet each week.

Stability came when the church moved to a storefront location – an old Tuesday Morning site – on Cartwright Road in Missouri City in the spring of 2000. Members scrubbed, painted and cleaned out the former store and, in time, created a respectful worship space.

The congregation worked together to furnish the new church. One member built an octagonal wood altar. Another painted “stained-glass” windows on the wall. Another member covered the walls with pen-and-ink stations of the cross. An organization in New York donated items such as candlesticks, crosses and vestments.

In August 2006, the congregation moved into its current location, a 25-acre property in the Sienna Plantation subdivision of Missouri City. It contains a sanctuary, four classrooms, a kitchen and office space for support staff.

During the transition from home-based worship to their current facility, the people of St. Catherine’s demonstrated faithfulness and endurance.

The church celebrated its new status at the council meeting on Feb. 9. St. Catherine’s Church now has almost 400 active members. Its school has an enrollment of 85 children, ages 2 through 5, with extended hours available for youngsters who need after care.

Now that St. Catherine’s is a parish, some things have changed: The congregation will no longer receive financial support from the diocese; its priest is now the rector instead of the vicar; and the governing board is now the vestry, instead of the bishop’s committee.

“There are many things that we have learned from this amazing experience; far too many to name here,” said the current rector, the Rev. Mike Besson. “At the top of the list? That there is nothing that we cannot do as a congregation, with God’s help, no matter how impossible it may seem.  We know that this has happened so that we may be bold and fearless in our life with Jesus Christ … who knows what he has in store for us now?”