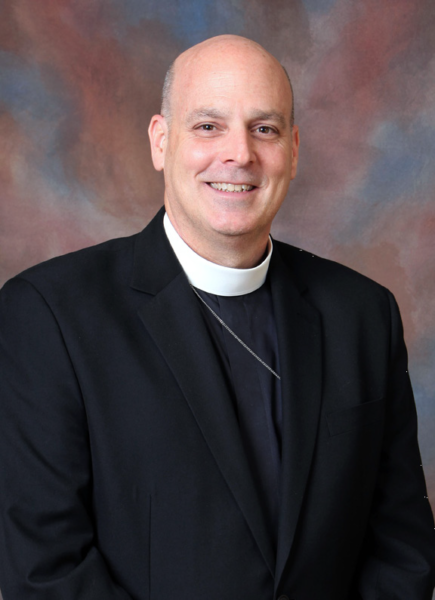 Hougland, rector of St. Luke’s Episcopal Church in Salisbury, North Carolina, was elected on the 8th ballot out of a field of four candidates. To be elected, a candidate must have received a majority of the votes in both the lay order and the clergy order. On the 8th ballot, he received 87 of 139 votes cast in the lay order (71 required) and 34 of 65 votes cast in the clergy order (34 required).

Under the canons (III.11.4) of the Episcopal Church, the election of a bishop requires the consent from a majority of bishops with jurisdiction and standing committees of the Episcopal Church. Assuming that consent is received, Presiding Bishop Katharine Jefferts Schori will ordain Hougland as bishop on Sept. 28 at the Van Noord Arena on the campus of Calvin College, Grand Rapids.

The election, which was held at Grace Church, Grand Rapids, followed a year-long search process in which three candidates were selected by the diocesan search committee; a fourth was nominated through a petition process. Prior to the election, the four candidates spent the first weekend in May traversing the diocese, meeting the people, and answering questions in a series of three “walkabouts.”

The other three candidates for bishop were:

Hougland has been rector of St. Luke’s Episcopal Church since 2005. Originally from Kentucky, he also served as canon evangelist at Christ Church Cathedral in Lexington, Kentucky, and prior to ordination worked for Lexmark International, also in Lexington.  He chaired the missionary resources support team for the Diocese of North Carolina (2008-2012), and was a clergy mentor for postulants to Holy Orders for the diocese. He is married to Dana Lynne Hougland, an educator and autism specialist. They have two daughters.

Hougland will succeed the Rt. Rev. Robert Gepert, who is retiring after serving as bishop of Western Michigan for 12 years. Gepert and his wife, Anne Labat-Gepert, will be moving to Lancaster, Pennsylvania, in September to be closer to their grandchildren. He hopes to do some writing, and she plans on doing a lot of quilting and volunteer work at their new church home in Lancaster.

The Episcopal Diocese of Western Michigan covers the western half of the lower peninsula of Michigan and includes 10,153 members worshiping in 61 faith communities.