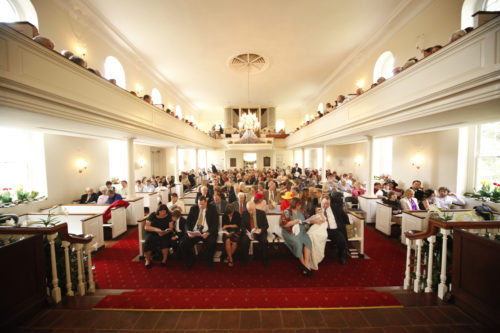 [Episcopal News Service] When the members of The Falls Church Episcopal formally install their new rector and celebrate their ministry together May 15, it will be just more than a year since they first returned to their historic building, nine months since their rector joined them and five days ahead of what they had hoped would be the last deadline in the parish’s nearly seven-year-old property dispute.

“It will be a night where we give gratitude for the past and we express our excitement about the present and the future [and] the great things that God is doing here,” said the Rev. John Ohmer, Falls Church rector, in an interview.

Diocese of Virginia Bishop Shannon Johnston, who will lead the service, told Episcopal News Service that the celebration and renewal of ministries “holds tremendous significance” for the congregation.

“After returning to their home parish a year ago, the members and leadership of this congregation have invested tremendous energy in their mission and ministry as a congregation. At this service, we will come together to celebrate that renewal and commitment to a very promising future,” he said. “That we can do so in this historic setting, home to so many generations of Episcopalians, is most fitting.” 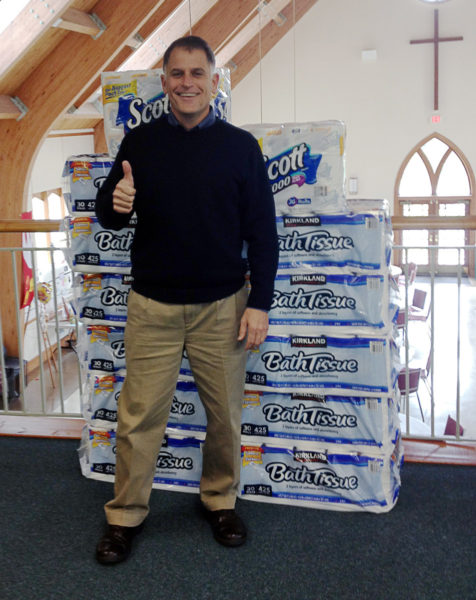 The Rev. John Ohmer, shown here with 300 rolls of toilet paper meant for a homeless ministry, says he felt called to join the congregation because it “really had a compelling vision for what the Episcopal Church could be again in Falls Church.” Photo: Falls Church Episcopal

Johnston said Ohmer “brings remarkable vision and spirit” to The Falls Church. Ohmer, the Rev. Cathy Tibbetts, vicar, and the lay leadership of the congregation “are working together to ensure that The Falls Church continues to grow and thrive in its service to Christ,” he added.

Falls Church Episcopal has been moving into its future ever since members of the historic parish in suburban Washington, D.C., voted overwhelmingly in December 2006 to leave the Diocese of Virginia and the Episcopal Church in a theological dispute. Those who decided to leave in fact stayed in the Falls Church property and refused to return it to the diocese.

Only 27 of the nearly 2,800 members remained united with the Episcopal Church after the vote. They began meeting in a living room and elected a vestry. Then-Virginia Bishop Peter Lee assigned clergy to the group and soon Falls Church Presbyterian across the street from Episcopal Church property offered them worship space in their loft. The group soon outgrew the loft and moved twice to larger Presbyterian spaces.

“The Presbyterians were absolutely amazing,” said parishioner Matt Rhodes. “We’re still involved with the shared ministry they do with the homeless.”

The average Sunday attendance soon grew to between 80 and 100, and from the beginning, Ohmer said, the Episcopalians “really had a compelling vision for what the Episcopal Church could be again in Falls Church.”

After a Fairfax County Circuit Court Judge ordered Falls Church Anglican in March 2012 to return the parish property to the diocese, the Anglicans only agreed to allow the Episcopalians to return to the parish building to celebrate Easter (April 8, 2012).

However, the Anglican congregation soon thereafter appealed to the state Supreme Court and in the meantime asked the Circuit Court to prevent the Episcopalians from returning again until the high court ruled. The Circuit Court refused and the Falls Church Episcopalians returned to their property on May 15, 2012.

On April 18 of this year, the Virginia Supreme Court affirmed the circuit court ruling returning The Falls Church property to the Episcopalians.

The Rev. John Yates, Falls Church Anglican’s rector, told that congregation April 28 that the Supreme Court ruling was an “overwhelming rejection of our arguments” and “reduces our legal options drastically.”

“Unless we can discern that there are further means of appeal which make good sense, then we can say that it is clear – we will not be returning to our old property” or recovering little of the funds that are part of the dispute, he wrote.

And in his weekly message for the week of May 19, Yates said: “We have received further confirmation that the courts are not likely to reverse last year’s ruling.” He explained why the congregation’s leaders are “willing to lose our property and move ahead into an uncertain, unclear future.”

Still, Falls Church Anglican has until May 20 to ask the Supreme Court for a rehearing on its decision and a May 10 letter from the congregation’s two wardens and vestry indicated that the church will ask that court to reconsider its ruling. The Anglican congregation’s lawyers told the vestry that the Supreme Court based its ruling “on an argument that had never, in seven years of court proceedings, been presented by the other side” and that they had not been able to address, according to the letter. Thus, the vestry said it will be “filing a short [rehearing] petition with the court in a few days” as it continues its search for a permanent home.

“It was, of course, our hope that they would have decided that it was time to close this long legal chapter, and focus all their finances and energies, and allow us to focus all of our energies, on our ministries,” Ohmer told ENS.

Ohmer said that one of his frustrations is how the long legal process has “falsely convinced” some people that Anglicans and Episcopalians are meant to square off against each other “when in fact where we should all be marshaling our energies is in battling the common enemy we both share: that of rampant consumerism in our culture, and a general sense of meaninglessness, hopelessness, loneliness, and purposelessness.”

Ohmer said he spent 13 years as rector of St. James Episcopal Church in Leesburg, Virginia, throwing away any parish profile that came his way, he said, until he saw the one from The Falls Church Episcopal.

“There was something about this lovely, hardworking, patient group of people,” he said. “It’s a compelling story of people who really believe in themselves as a faith community that is loyal to the Episcopal Church, loyal to the Gospel and wants to be good news to the community. They’ve been through a really tough time, exiled from their own property for six, almost seven years.”

Rhodes and his family felt the same way. When the Rev. Michael Pipkin, who was priest-in-charge early after the split, needed back surgery, a priest from the Rhodes’ parish, Christ Church in Alexandria, was among the clergy who covered for him. Rhodes, who lives a mile from The Falls Church, said his family decided to attended one Sunday in 2008 to give the priest some familiar faces in the congregation.

“There’s a lot of enthusiasm, a lot of energy, a lot of growth” that Rhodes said comes from being back in the Falls Church property and the sense of looking outward from the church and into the future that Ohmer brought to the parish.

The congregation is discerning how best to be the good news to the community of Falls Church that Ohmer describes, both through outreach ministries such as the homeless ministry with the Presbyterians and through greater use of the church’s buildings. The church opened its doors to support groups, an English as a Second Language class and civic groups looking for meeting and banquet space.

In one case, a predominantly African-American congregation that needed a place to mark its first anniversary contacted Falls Church Episcopal and wound up celebrating in its sanctuary. Ohmer said that during the course of planning, they learned that the congregation’s senior pastor had no office and was running the church out of her car and a local Starbucks. She now rents space at Falls Church Episcopal for a minimal cost, he said.

Ohmer said they are showing that the slogan “The Episcopal Church welcomes you” is “true about the faith community and it’s true about the buildings and grounds.”

The growth in congregants — between 180 and 220 people now attend on an average Sunday — has included former members who “left when they saw what was coming in terms of the split” as well as people who have never been part of Falls Church, people new to the area and other Episcopalians “who came to see what we were all about,” Rhodes said. The Sunday school and youth group are growing as young families join, he added.

On May 15, the parish will officially welcome the latest group of between 30 and 40 newcomers, Ohmer said, calling them “a very strong outward and visible sign of the new energy and life going on here.”

And, while Falls Church Episcopal has been growing and looking outward, and dealing with the protracted legal issues, the parish has had to deal with the aftermath of the split on another more personal level. Families were and still are divided by the decisions of 2006, Ohmer said. In some cases one spouse might attend Falls Church Anglican while the other worships at Falls Church Episcopal.

When pastoral concerns arise in those families, Ohmer said, “those kinds of differences simply go away when it comes to pastoral care; we take care of one another’s families.”