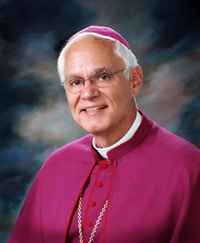 [Episcopal News Service] In a letter to the people and clergy of the Episcopal Diocese of Dallas, Bishop James Stanton announced his intention to retire on May 31, 2014.

Stanton has served as the sixth bishop of Dallas since March 1993.

“These have been the most challenging, fulfilling and joyful years of my ministry,” Stanton said in his letter. “I am grateful for the trust vested in me by the people and clergy of the diocese, and cherish the many relationships which have developed and deepened over this time … The decision to retire is not easy, but it is right for me at this time.”

Before his election as bishop, Stanton served for six years as rector of St. Mark’s Episcopal Church in Glendale, California. He has served as curate, vicar, and rector at Episcopal churches in California (Canoga and Stockton) and Iowa (Cedar Falls).

A native of Atchison, Kansas, Stanton graduated from Chapman University in Southern California. After college he pursued ordination in the Disciples of Christ and attended Lexington Theological Seminary in Kentucky. He transferred to the Southern California School of Theology, where he graduated with a D. Min. degree in 1975. He spent a year in further study at the Church Divinity School of the Pacific in Berkeley, California. He was ordained deacon and priest in the Episcopal Church in 1977.

Stanton has been married to Diane since December 1968 and they have two grown children. Stanton and his wife will continue to live in the Diocese of Dallas following retirement.