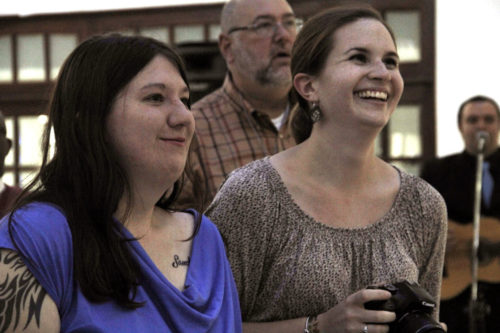 “Well, friends, I think you’ve found some powerful assurance in these last few days.  For one, you’re not alone. There is quite a team gathered here, and it represents a much larger network of missioners and disciples. This body is like the handful of disciples watching Jesus rise into the clouds,” said Jefferts Schori.

“There are some wonderful old paintings and stained-glass windows that show just his feet, hanging out from under the cloud into which he’s disappeared. Those feet are here, along with Jesus’ hands and heart and spirit. In a very real sense, those disciples couldn’t get to work until Jesus left – while he was there, they wanted him to fix everything. He kept telling them, ‘you feed them’ and ‘you heal them,’ but they never really got started until he was no longer there to do it for them.” [Sermon text available in English and Spanish here.] 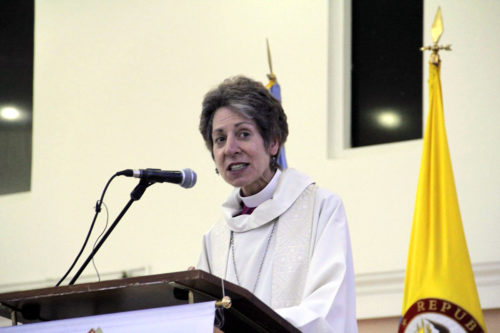 GEMN is a network of individuals, representatives of development organizations diocesan mission representative who are committed to sharing mission information and promoting mission. Ninety Episcopalians from North, Central and South America and the Caribbean gathered May 5-9 in Bogotá, Colombia, for the conference themed “Companions in Faith and Resources: Participating in God’s Mission.” The 2014 GEMN conference will take place in the Seattle, Washington, area May 29-June 1.

In a departure from previous GEMN conferences, in addition to mission the Bogotá conference includes a focus on financial sustainability appropriate with it being held in Province IX, which in 2012 adopted self-sustainability as a focus.

“North Americans like to support social and humanitarian programs, but if the churches are not self-sustaining they will not be able to work through the diocese on those programs,” said Bob Stevens, the outgoing executive director of the Dominican Development Group, during the start of a May 9 panel discussion on self-sustainability. 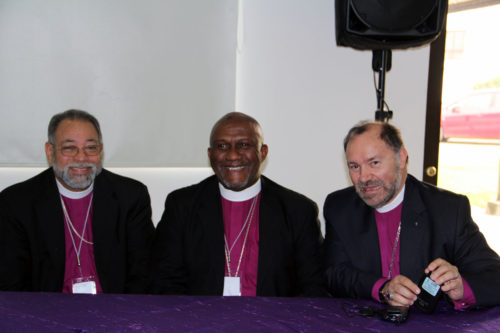 “Dependency destroys human beings,” said Allen, who has set the year 2019 as the goal for his diocese’s independence from the Episcopal Church’s financial support. He has told his clergy and seminarians, “If we are going to change we all have to support self-sufficiency, each congregation, urban or rural, needs to have a microenterprise …  If you are not willing to support a self-sufficient project, this is not the place for you to be.”

The 2012 General Convention allocated $1 million to guide the Province IX dioceses towards self-sufficiency. Currently only the Diocese of Puerto Rico, which operates a large hospital system, is self-sufficient.

The Dominican Republic has set 2015 as its year to reach self-sufficiency, said Holguín, during his presentation, a goal that has been strengthened by the diocese’s partnership with the Dominican Development Group, which was established in 1998 to assist in the development and self-sufficiency of the diocese, one of the fastest growing dioceses in the Episcopal Church.

“Ninety percent of the people in our parishes are poor and maybe 10 percent are middle or low class and one or two might be in a better financial situation,” said Holguín, adding that in a situation like this you need to be very entrepreneurial, though he said the church is educating members about the importance of tithing 10 percent of their income.

To reach its goal, the Diocese of the Dominican Republic depends on partnerships with its 16 companion dioceses, parish, friends and other supporters.

“They fall in love with the way we carry out the mission in our diocese,” he said.

Since 1991, the Dominican Republic has decreased its dependence on the Episcopal Church from 84 to 18 percent, said Holguín, adding that support from the Dominican Development Group raised 60 percent of its $6 million endowment; the ultimate goal is to raise $7 million.

“The church developed with a dependence… and it was harmful because they [the Episcopal Church] never asked us to achieve a goal,” said Holguín. “They gave us the fish every day but never taught us to fish.”

In Colombia, the youngest diocese of the Episcopal Church, 90 percent of the priests are college-educated professionals who do not draw a salary from the diocese, and each parish has modest revenue that allows them to support, at a minimum, the infrastructure, said Duque-Gomez.

In addition to Colombia, Honduras and the Dominican Republic, there are four more Province IX dioceses spread across the Caribbean and Central and northern South America. They are Venezuela, Puerto Rico, Ecuador Central and Ecuador Litoral, all of which were represented at the Bogotá conference.

In 2010, the Episcopal Church informed the dioceses of Province IX that it was cutting their budgets by 32 percent. For Allen, he said, it was a “degrading” experience.

“They didn’t ask us how we felt about that because we are dependent,” he said.

GEMN itself was formed by a group of bishops during a time of contraction when the 1994 General Convention decided to cut the mission budget, said Gini Peterson, a GEMN board member from the Diocese of Atlanta.

“I think the support and encouragement that are intangible is part of the greatest benefit of membership,” said Peterson.

Holding the conference in Colombia served to strengthen the bonds between the dioceses of Province IX and the U.S.-based dioceses and parishes, said the Rev. Juan Carlos Restrop, who serves La Catedral De San Pablo in Bogotá.

As for the Diocese of Colombia, which is beginning to see itself not as subordinate, but rather as moving toward self-sufficiency, it was important to host the conference and educate others about some of the diocese’s successes.

Earlier in the conference, attendees were given the opportunity to experience some of the diocese’s ministries, all of which are supported by parishes.

The 18th annual GEMN conference was the first ever attended by Rev. Canon Francisco Salazar of the Diocese of Venezuela. It served as a platform for dialogue on mission and for that reason exceeded his expectations, he said. 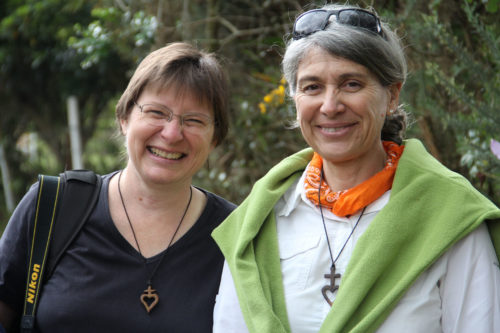 “That is the strength of this conference,” he said.

Laura Walta, director of global mission for the Diocese of Massachusetts, thought the GEMN conference set a context for mission and what it means to be involved in mission, and the discussions reinforced the notion of a changing approach.

“The paradigm needs to shift from one of paternalism, charity and crisis,” she said. “People look at poverty like it can be fixed. They see material poverty and treat it with a North American approach. People need to learn about the whole person.”

Mission should reflect, at the heart of it, Walta said, the vow Episcopalians take in the Baptismal Covenant: “ … to seek and serve Christ in all persons.”

For Young Adult Service Corps missionary Nina Boe, who serves in the Anglican Episcopal Church of Brazil, the conference’s theme brought to mind a quote by Lilla Watson, an indigenous Australian woman: “If you have come to help me, you are wasting your time; but if you are here because your liberation is bound up with mine, then let us work together.”

Much of mission and humanitarian aid still is approached in a patriarchal way, through donations and gifts, said Boe.

“When people go out into the field they are changed and we are changed as well. In a healthy relationship, it goes both ways,” she said. “But are we willing to encounter God and the other in the field?”

“GEMN is able to network on a grassroots level with parishes and dioceses and the church so they are a valuable resource,” he said.

For the most part, the GEMN conference was held in Spanish, with simultaneous English interpretation, which for Sandra McPhee, chair of the Episcopal Church’s Standing Commission on World Mission, was something new and shifted a leadership role to Province IX.

“It gives me great pleasure to see Province IX stepping up and being out front in leadership and claiming their proper place in the Episcopal Church.”