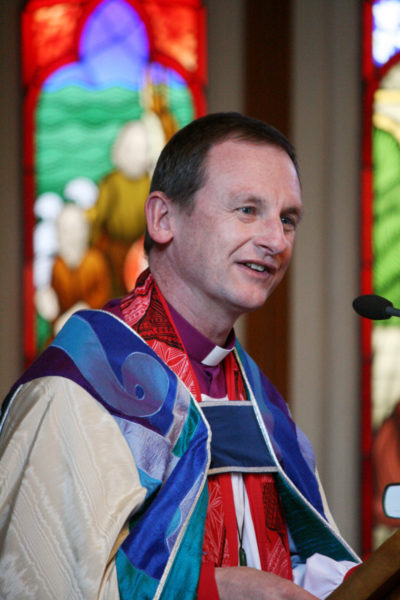 [Anglican Taonga] Testimony before the New Zealand Human Rights Review Tribunal is due to end this week over a charge that Bishop of Auckland Ross Bay has discriminated against a gay man who wants to become a priest.

Eugene Sisneros, an events coordinator at St. Matthew-in-the-City, was refused entry to the diocesan ordination training program because he is living in a same-sex relationship – and is therefore not chaste in terms of the New Zealand Anglican Church canons.

The bishop’s position is that the Anglican canons do not permit anyone living in a sexual relationship outside of marriage to be accepted for training for the priesthood.

The bishop believes that the canons presently define chastity as being either married in the traditional sense, or single and celibate.

The question of whether the definition of chastity should be broadened in canon law to include those living in committed same-sex relationships is before the Ma Whea Commission, which will report to next year’s provincial General Synod.

If the General Synod decides such same-sex relationships can be blessed, it automatically follows that those in these relationships could be considered for the priesthood.

Sisneros, who says he has been signaling his desire to begin ordination training since 2006, has completed a theology degree. He says the bishop’s decision breaches the country’s Human Rights Act, which outlaws discrimination against job seekers.

The hearing began in the Auckland District Court May 6.

Auckland Bishop Bay told the panel that he had interviewed Sisneros in November 2010, and Sisneros had “indicated that he understood that his relationship would prevent ordination at this point.

He’d wanted to begin the process, nonetheless, and Ross had said he would seek advice about that.

But in March 2011 Judge Chris Harding, the chancellor for the Diocese of Waikato and Taranaki, had given a legal opinion which said that any bishop who proceeded with the ordination of a person in a same-sex relationship did so at their peril.

Bay said he came to the view that it would be pastorally irresponsible “to take someone down a path which I know to lead to a dead end.”

In testimony on May 7, the tightrope that the tribunal must walk as it decides the case became dramatically evident.

Archbishop Philip Richardson testified, spelling out how the church makes its laws, and how the present marriage and ordination canons cannot be interpreted in a way that would allow gay ordination.

At one point Rodger Haines, the chairperson of the tribunal, asked whether Richardson accepted that discrimination had taken place.

The archbishop acknowledged that, in terms of the definition in the human rights act, it had. What the defense is claiming, he said, is the exemption provided in the act to religious organizations.

When tribunal member Huhana Hickey asked where in the Bible Jesus states that homosexuals have less spiritual significance than heterosexuals, the lead defense counsel, Bruce Gray, leapt to his feet. He said that out of respect for the tribunal and “a desire for transparency” he had allowed a series of questions that did not, in his view, comply with the law.

But, he said, the tribunal had sailed “perilously close” to going beyond its remit under the Bill of Rights Act – which allows religious bodies to claim exemption from some civil rights obligations where these conflict with doctrine.

But when its questioning began “drilling into Scripture” and evaluating doctrine and the scriptural basis for that doctrine, it has “trespassed,” he said.

Haines said the tribunal must be able to assess whether the refusal to admit Sisneros was a matter of doctrine or “established custom.”

“What we are testing,” he said, “is whether what is put in front of us is doctrine. And it becomes quite difficult to test that without actually asking questions about doctrine. Where it comes from, the way it finds its way into formularies.”

Testimony at the tribunal showed that at least one New Zealand Anglican bishop had knowingly ordained a gay, partner man to the priesthood in recent years.

The archbishop also said that Anglican Church in New Zealand considers that the form of same-sex marriage recently ushered into law by the country’s Marriage Amendment Act “is not a Christian form of marriage.”

The tribunal will issue a decision at a later date.