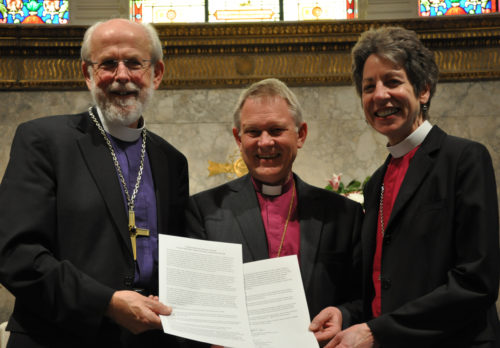 Editors’ note: Story updated May 10 to add link at end of story to just-released video of May 2 sessions.

[Episcopal News Service – Washington, D.C.] The Episcopal Church, the Evangelical Lutheran Church in America and the Church of Sweden (Lutheran) committed during a climate change conference here to “leading a conversion of epic scale, a metanoia, or communal spiritual movement away from sin and despair toward the renewal and healing of all creation.”

“We commit to being the voice and hands that will witness to the Gospel of Jesus Christ and build the moral and political will that prompts action from our elected leaders,” Presiding Bishop Katharine Jefferts Schori, Evangelical Lutheran Church in America Presiding Bishop Mark Hanson and Church of Sweden Archbishop Anders Wejryd said in a joint statement issued May 2. “As international churches with congregations in many nations, we can and will use our global networks to promote a political framework to limit climate change, while in a unified voice we speak to the world about the urgency of committed climate work.”

They addressed their statement to “our churches and to people of faith around the world.”

The complete statement is here.

The statement was announced the evening of May 1 during the opening session of a two-day gathering was sponsored by the Episcopal Church and the Church of Sweden. It included two public sessions at St John’s Lafayette Square, as well as visits to Capital Hill by the official participants to advocate for climate-change action. The theme of the conference was “sustaining hope in the face of climate change.”

The genesis for the gathering, according to the Rev. Margaret R. Rose, the Episcopal Church’s deputy for ecumenical and interfaith collaboration, was a conversation between Jefferts Schori and Wejryd about the two churches’ ecumenical work and “our common passion about climate change.”

Jefferts Schori acknowledged during her opening remarks to the gathering that “the idea of changing climate elicits grief in many people, as well it should.” She said that people express that grief in “many of the classic ways that we respond to all kinds of loss.”

Some deny the facts, some look for others to blame and some get angry and flaunt their wastefulness or charge others with political manipulation of the media, she said.

“And some get so depressed that they simply leave the conversation – ‘there’s nothing I can do, so why should I try?’ People of faith know another response, particularly in this Easter season.”

That response, she said, begins with rejecting “the ancient demons of individualism, materialism and selfishness – what today we often call consumerism” because they all feed on a “self-focused fear of scarcity.” The drive to consume more and more “soon becomes time stolen from the possibility of healing, like the time that could be spent building deep and meaningful friendships with God and neighbor …  we are made whole in loving God and neighbor and not ourselves alone.” 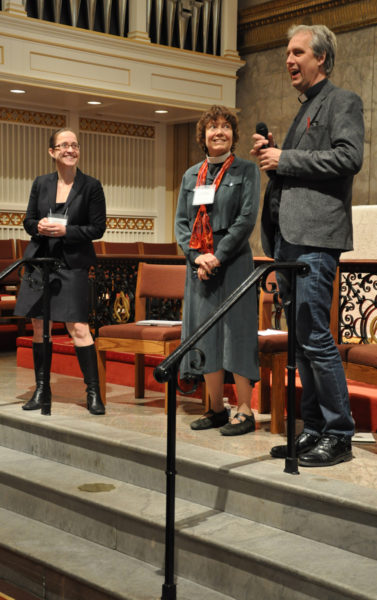 Cassandra Carmichael, director of the National Council of Churches Washington office, (left) and the Rev. Margaret Bullitt-Jonas, priest associate of Grace Church, Amherst, Massachusetts and co-chair of Religious Witness for the Earth join in singing “This Little Light of Mine” led by the Rev. Henrik Grape, coordinator of the Church of Sweden’s environmental network and a member of the climate group of Christian Council of Sweden. Photo: Mary Frances Schjonberg/Episcopal News Service

The presiding bishop invoked the Easter season to say that, along with the risen Christ, there is “abundant hope that the body of God’s creation might also rise – renewed, redeemed, and made whole.”

“May we be made Christ’s passion, God’s hands, and Spirit’s breath to make it so,” Jefferts Schori said.

Swedish Archbishop Wejryd told the gathering on May 1 that the churches must “regain the notion of life as a gift … it’s given to us continuously.” With that recollection of the gift of life, “we might be able to move the focus from ourselves to the giver and the wishes, the ideals of the giver, and to the other people and to the rest of creation that are also gifts from that giver.”

Science can help people focus on the gift of life by showing “how complicated, how diverse, how balanced, how interdependent” the world is, Wejryd said.

Wejryd said he finds hope for the future and the role of the churches in that future in the knowledge that people of faith are “stewards of stories that tell us that things can change and they can change for the better.”

Mary Evelyn Tucker, a senior lecturer and senior research scholar at Yale University and a co-founder and co-director of its Forum on Religion and Ecology gave the keynote address on May 1. She continued the conference’s theme of hope by suggesting that the academy (and scientists in particular) and the church must both change their stances in the face of overwhelming evidence of climate change.

Tucker said “moral wakening is critical,” but, she asked, “will moral rebuke be sufficient or is evoking compassion for the earth community – both people and planet – what is also needed?”

Guilt can be a motivator for change but, Tucker said, “if we are just inducing guilt into the people we won’t have the transformation of action and long-term change.”

Tucker asked “how can we break through scientific complexity to moral clarity that gives rise to social, political and religious change?”

“Scientific facts and graphs have not changed behavior,” she noted.

And, scientists are not inclined to make the leap from describing problems to advocating prescriptions for change, according to both Tucker and another speaker at the opening session, Kevin Noone, the Swedish Secretariat for Environmental Earth System Sciences at the Royal Swedish Academy of Sciences and a research scientist in atmospheric chemistry and physics at the Stockholm Resilience Centre at Stockholm University.

Tucker also noted that “divinity schools have not made the climate central to their cause” and thus have lost the chance to train new generations of clergy and lay people.

She also suggested that religious communities are filled with dichotomies that offer both barriers to working for climate change and foundations upon which to base such work. For instance, many denominations are hierarchical in their structure and make exclusive claims on truth but they also advocate fairness and equality, and are inclined toward “broad moral outreach.”

“Incarnation alone would say ‘what a sacrilege that we are doing.’ This whole world is infused with the logos from the very beginning, as John’s gospel says,” she said.

Tucker acknowledged that many denominations are worried about declining participation, but suggested they are focused in the wrong place.

“Maybe the dying away of the churches is for a new birthing — a new Easter moment – that we will not be obsessed by our sectarian concerns but, we will be truly obsessed about the life of the planet that is disappearing before our eyes,” she said.

People are in despair about the environmental future and in their existential concern lies “the call of the churches,” she added.

The call cannot be answered just with “guilt inducing” or developing an ethic that provides answers, she said, and it is about more than taking leadership on practical issues such as changing to energy-efficient light bulbs or reducing carbon footprints.

“If we do not provide the wellsprings of hope for who we are as humans in relation to a magnificent, diverse, alive, living universe, we will have failed in our task,” she said. “But as we let go of some of our concerns about whether we will live or die as institutions and when we put in front of us [the question of] will the earth live or die, we will find not only the hope but the power, the energy and the vision to go forward.”

In his remarks, Noone continued the theme of community as a way to address climate change and agreed that scientists and theologians must be part of that community. “We have to be singing in a choir … not just one single voice.”

And, he said, humans must not only repair their relations with each other but also with the created world. “It’s not ‘us and nature;’ it’s ‘us.’”

Science is showing that this activity is not just changing how the planet looks, it is changing how the planet works, according to Noone. Still, there is hope in the fact that humans have drastically changed energy, transportation and agriculture in just the past two generations, Noone said. He argued that those changes show society can transform drastically and relatively swiftly.

The challenge now is what sort of changes will be made, he said, and people have to decide, “how comfortable or dis-comfortable we want transitions into the future to be.” 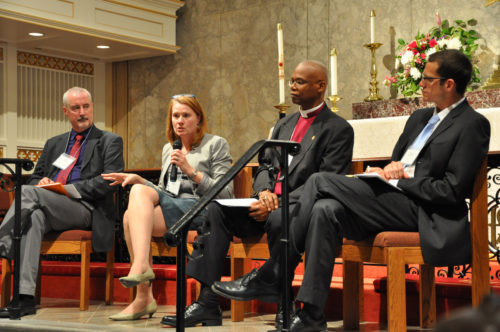 From left, Kevin Noone, Swedish Secretariat for Environmental Earth System Sciences at the Royal Swedish Academy of Sciences and a research scientist in atmospheric chemistry and physics at the Stockholm Resilience Centre at Stockholm University; Mary Minnete, ELCA director of environmental education and advocacy, the North American representative to the ACT Alliance Climate Change Advisory Group and the current chair of the National Council of Churches’ Eco-Justice Working Group; Diocese of Panama Bishop Julio Murray and Willis Jenkins, the Margaret Farley Associate Professor of Social Ethics at Yale Divinity School discuss how to envision hope in the midst of climate change. Photo: Mary Frances Schjonberg/Episcopal News Service

“Responding in Hope: the local church’s response to climate change” included the Rev. Margaret Bullitt-Jonas, priest associate of Grace Church, Amherst, Massachusetts and co-chair of Religious Witness for the Earth; the Rev. Henrik Grape, coordinator of the Church of Sweden’s environmental network and a member of the Climate group of the Christian Council of Sweden; and Cassandra Carmichael, director of the National Council of Churches Washington office and the NCC’s eco-justice program director.

Minnete told the gathering that people of faith can tell politicians and policy makers stories they would otherwise not hear.

“We can say to them ‘we’ve been to Africa and this is what we’ve seen’ or ‘we live in the Arctic and this is what we know’,” she said. “Those stories are very powerful because they come out of not our own interest but, our interest in our neighbors and in God’s creation. That’s something you don’t hear a lot in Washington and internationally in the climate change discussions.”

Murray agreed and added that churches must stop thinking only about how they can speak for those whom they think of as voiceless and instead “articulate the space” where people who previously have not been heard can tell their stories.

Speaking of neighbors, Jenkins answered a question about how churches can convince their members to truly love their neighbors in the midst of climate change discussions by saying the question people have to be willing to ask first is “are we willing to stop harming our neighbors.”

“We let privilege cloud us from seeing what our obligations are,” he said. “I wouldn’t want to flatter us by saying we’re trying to figure out how to love our neighbors.”

Faith communities must ignore political boundaries, he said, and come together to invent ways to stop harming each other “and, maybe …one day, learn how to love.”

Bullitt-Jonas said “I’m putting the results in the hand of God. I do not know how this is going to end. If everyone chooses not to do anything, we can assume the end is not going to be so good.”

“But if, one by one, more and more of us say ‘I’m going to live in the power of the risen Christ. I’m going to cast my lot with hope. I’m going to be on the winning team,’ who knows what God can do with that,” she said. “Then the future is open-ended and we get to create it.”

On-demand video recordings of most of the May 2 sessions are here.

— The Rev. Mary Frances Schjonberg is an editor/reporter for the Episcopal News Service