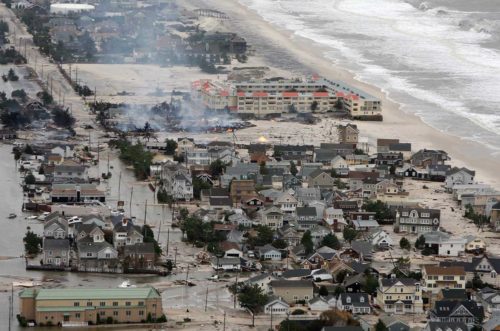 In New Jersey Hurricane Sandy caused the greatest amount of destruction along the Highway 35 corridor that hugs the Atlantic in parts of Monmouth County and most of Ocean County. The highway runs down the middle of this photo shot the day after the storm struck. The area faces years of rebuilding and Episcopal Church congregations are already in the thick of those efforts. Photo/Office of Gov. Christ Christie

[Episcopal News Service] When Hurricane Sandy hit the East Coast of the United States six months ago, the so-called “Frankenstorm” gave some New Jersey Episcopalians new ways of understanding the biblical experiences of exile and Passover.

The winter contingent of St. Elisabeth’s Chapel-by-the-Sea in Ortley Beach is in exile. Sandy swept the seasonal chapel off its moorings near the beach, across Barnegat peninsula and into the bay the night of Oct. 29, 2012. The members are worshipping in East Dover Baptist Church on the mainland each Sunday.

It’s a nice building and the people and pastor have been very welcoming, Senior Warden Dennis Bellars said. After the bishop’s chair was found in the ruins of Ortley Beach, the congregation allowed the St. Elisbeth’s members to keep it in the sanctuary.

About 40 miles south in Beach Haven near the end of Long Beach Island, Holy Innocents Episcopal Church sits about a very short block from the Atlantic with Pearl Street forming the northern boundary of its block. Sandy breached the Pearl Street dune and “green sea water was running down Pearl Street for a couple of tides,” according to the Rev. Frank Crumbaugh, Holy Innocents’ rector.

Houses on the north side of Pearl Street were flooded but the water got no closer to the church and rectory than the sidewalk on the south, he said.

“That’s a powerful sign of deliverance,” Crumbaugh told Episcopal News Service. “When you look at that, you understand what ‘Passover’ means in a new way.”

Yet, Crumbaugh is clear that “we weren’t preserved to celebrate our good fortune; we were preserved to stand with people who weren’t and that’s been a powerful sign in Beach Haven.”

And that has been the other power biblical lesson Sandy left in its wake: churches have a role in their communities based in Scripture.

“Everybody knows what we’ve suffered and lost, and everybody continues to feel those losses and, at the same time, we’re like Paul,” Crumbaugh said. “We’re chastised but not killed; killed and, see, we are alive.”

The same could be said in Tuckerton, on the mainland about 10 miles across the bay from Beach Haven, and in the surrounding Little Egg Harbor Township.

“I really am trying very much to have this congregation be the church, which is really the body of Christ connected to one another and the world in a way that hopefully is somewhat different than a secular relief institution,” said the Rev. Martha McKee, vicar of Church of the Holy Spirit in Tuckerton. “We’re working very hard on supporting the people who need help and walking with them through this process, but also supporting the people who are helping others.” 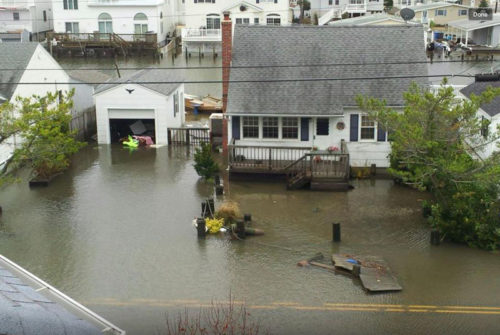 A lot of people need help. The statistical picture of Sandy’s swath across New Jersey is stunning. The New Jersey Department of Community Affairs says Sandy damaged or destroyed 346,000 housing units in the state. More than 23,000 of those homes were in Ocean County, whose eastern boundary hugs the Atlantic and which, along with Monmouth County to the north along the ocean, took Sandy’s brunt.

Nearly all of Ortley Beach’s 731 homes suffered severe or moderate damage, according the New Jersey Department of Community Affairs. Sixty-two percent of the 795 households in Beach Haven were severely damaged, according the state. The storm damaged the homes of about 59 Holy Innocents parishioners and six homes were total losses, Crumbaugh said. Eight families were displaced in some way.

Each congregation is faced or will be faced with the task of discerning what role it is being called to take in the post-Sandy life of its surrounding community. While the St. Elisabeth members hope to be back in their repaired fellowship hall in about four to six weeks for summer services, they face the larger issue of how to rebuild their church.

Insurance will cover the cost of rebuilding the same size building out of the same materials, Bellars said, but the members have many ideas beyond those basics.

Some of the members, Adams said, have already told him that if God took away the church and left them with a clean lot “then God wants us to do something; he’s giving us an opportunity.”

Part of the opportunity centers on knowing that, before Sandy, the congregation had received the permission of the diocese to continuing evolving from seasonal chapel to a year-round church.

The visioning session will begin to address the question not just of how to resume Sunday services on the site, according to Adams, but “how can you now serve your neighbors who were affected and the community because they need to be and they desire to be a symbol of the community and they want to play a part in how that community is going to come back together and how it’s going to look going forward.”

Some members, Adams said, want to build a replica of the church while others have suggested that a multi-story building might allow them to provide a range of social services. He suspects the eventual shape and mission of St. Elisabeth’s will be somewhere in between those two poles “and it’s going to such a great seed for them to build a congregation around.”

Meanwhile in Beach Haven and Tuckerton, Episcopalians are continuing to help others and they put their own lives back together.

Many homeowners in Beach Haven are elderly people who worked all their lives, bought a beach house early on, rented it out most of each summer so that essentially “the summer visitors bought the house for you,” Crumbaugh said. Eventually the owners retired, sold their home in north Jersey or Pennsylvania, winterized the Beach Haven house and moved in to “physically occupy their most important asset.

“Hurricane Sandy wiped out a lot of bank accounts,” he said.

Crumbaugh said his parish has found a call to “love and support” residents as they navigate what at times can be a morass of FEMA and insurance paperwork.

Accompanying that reality is the frustrating and “hard reality” that insurance companies must answer to shareholders as well as policy holders. The common assumption that when one buys insurance one has some protection and advocacy from the insurance company is not true, Crumbaugh said.

Added to that reality is the fact that FEMA’s recently released advisory base flood elevation maps will eventually require some homeowners to elevate their houses as high as 14 feet above sea level. Such work will cost tens of thousands of dollars and the exact elevations will not be set for another year or more. Some people may be forced to sell their property in what may well be a very tough market.

Adams said his office has connected Holy Innocents with Legal Services of New Jersey and the parish is running a support group to “hook these people up with some good legal advice.”

“To stand with people while they’re making some hard choices and working very hard to figure out what their next move is has been a privilege,” Crumbaugh said. “It’s hard work for them and it’s hard work for those that love them but that’s why we’re here.

The frustrating process of recovery “brings on another opportunity as a church because we need to address those emotional and spiritual needs as well,” Adams said.

Crumbaugh, McKee and Adams all said they know that churches can be places for people “just to come and be around others that are sharing the same kind of difficulties; to be in an environment where it is safe to talk about them,” according the Adams, and then have the churches help them can get help. 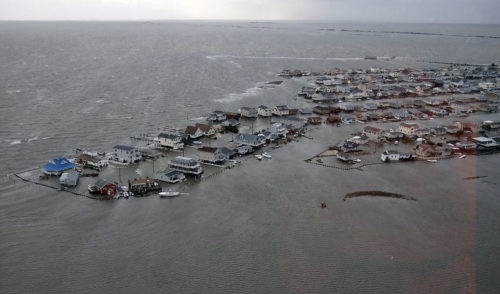 The results of the storm surge from Hurricane Sandy can be seen in a swamped Tuckerton, New Jersey. Photo/U.S. Coast Guard

The Tuckerton parish, which before Sandy helped run two food banks with other local churches and offered a free monthly community meal that usually attracted between 80 to 100 people, has continued and strengthened the food focus of its ministry. Other Episcopal churches have helped supply food for the monthly meal. Trinity Episcopal Church in Moorestown took the community dinner the day after Christmas, McKee said, and last week its youth group cooked a meal last week at Holy Innocents. It’s in the freezer there ready for next month’s meal.

Holy Spirit also offered a family night out with the help of New Jersey Hope and Healing that included a dinner, activities for children and a talk with parents about helping young children cope with disaster.

In addition, the church sees part of its post-Sandy ministry as helping to feed the many volunteers who are coming into the area to help with recovery efforts.

As the weather warms up and more do-it-yourselfers start to work on their homes, McKee predicts people will be looking for childcare and to “be entertained at lower cost.” The church plans more such dinners in the future and hopes to offer nights with movies and dinners soon.

“I think vacation Bible school will be a big deal this summer for that some reason,” she said.

Whatever the work, “the most important thing we can say,” McKee said is that “the church is going to be here walking with you.”

Adams said that evolution and discernment is an on-going part of his job that he calls “a process in which we can transform a tragedy into an opportunity” by discerning what skills and resources each congregation can bring to bear to be relevant and serve their communities not just after disasters but every day.