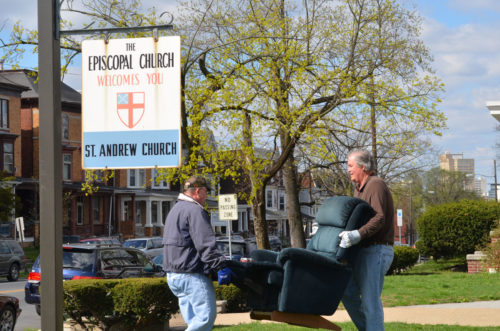 With the rapid movement of residents out of the city and the economic decline of Harrisburg due to the loss of industry, the demographic of the city changed. Over time, the economic vitality of the city shifted to the more suburban valley. The parish continued to operate as one with one vestry and one rector, but the city church faced increasing challenges as the neighborhood of Allison Hill changed and the parish got older.

Bishop Nathan Baxter, a son of the city of Harrisburg, sent his staff in to see what the city church wanted to do. The staff met with a congregation that had lost hope and felt bad about itself. Members had been told they were a burden on the valley and needed to close, and they were afraid of losing their church.

Through a process of Appreciative Inquiry, the congregants explored their history, mission and new ways of being church. They invited a Baptist church to use their facilities, which generated income as well as making a statement to the community. Later a Mennonite church began using the facility, too.

“Now we are heeding God’s call and re-establishing our church with a new mission to the community,” said Troy Thompson, a lifetime member of St. Andrew’s. “St. Andrew’s has been touched by the Spirit, and our energy and fire have to be replenished to spread God’s word.”

St. Andrew’s in the City is now one of four “enterprise zones” being redeveloped by the diocese. The idea is to assist churches identified as ones where growth might be obtained by thoughtful investment. In the process, the diocese will become a “learning diocese” as it studies each zone and learns from its efforts.

“We expect mistakes. We expect successes,” said the Rev. Ted Babcock, canon to the ordinary. “Each new enterprise zone provides the diocese valuable information on how to go about strengthening our presence in Central Pennsylvania and the city is one of four now redeveloping their ministry.”

At St. Andrew’s, he said, “The Spirit has manifested itself in a call to plan and execute a radical makeover of the parish building. The old is coming out, and the new is coming in.”

The process began April 13 with “D-Day,” or Dumpster Day, when members asked two parishes and the other mission church of the diocese to come and help them clean out the city facilities in preparation of an “extreme makeover” to begin on June 1.

More than 30 people came to help. In less than three hours, they cleaned the entire church and former rectory of years of debris and other “stored” items that had built up. The cleanup filled a large dumpster, and some of the more valuable items were contributed to the Valley for its own tag sale.

On June 1, more than 80 people from throughout the diocese are expected to help with the makeover. The first two floors of the church building will be painted. Old wiring will be replaced and the plumbing repaired. Afterward, new carpeting and a new tile floor will be laid. So far, St. Andrew’s has raised more than $50,000 to begin the makeover.

The church’s neighbors are taking notice of the revitalization. One Dumpster Day, onlooker Sonja, a Hispanic pastor who lives next door to St. Andrews in the City, said, “This restoration is bringing the church back to life in the community.

“I wonder if there is room for our Hispanic neighbors to do Bible study?”

— Linda Arguedas is canon for events, programs and communications in the Episcopal Diocese of Central Pennsylvania.