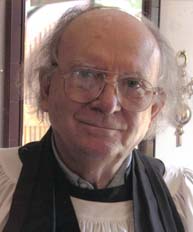 [Episcopal News Service] Scholar, teacher, poet, priest, beloved husband, father, and grandad, the Very Rev. John Booty died at age 87 April 17 at his home in Center Sandwich, New Hampshire. He goes joyfully to join his son Peter who died in 2010, and he leaves behind as witness to his love his wife of 62 years, Kitty Lou, his daughter Carol and her husband Ernie, his son Geoffrey and his wife Helen, Peter’s wife Diane, his daughter Jane and her husband Todd, nine grandchildren and four great grandchildren, all of whom gave him much happiness.

John was born in Detroit, Michigan, on May 2, 1925,  earned a Bachelor of Divinity degree from Virginia Theological Seminary in Alexandria, Virginia, and began his life of service to the Episcopal Church as a curate at Christ Church, Dearborn, Michigan. After earning a Ph.D. from Princeton University, John joined the faculty at Virginia Seminary as Professor of Church History, taught at the Episcopal Divinity School in Cambridge, Massachusetts, and served as Dean of the Seminary at the University of the South in Sewanee, Tennessee. A life-long scholar, John was a Fellow of the Folger Shakespeare Library and the National Endowment for the Humanities, and he served as Historiographer of the Episcopal Church. He was awarded Honorary Doctor of Divinity degrees from Virginia Seminary and the University of the South. Also a gifted writer, John had numerous books published, including “The Church in History, Reflections on the Theology of Richard Hooker,” “John Jewel as Apologist of the Church of England, Meditating on Four Quartets,” and “The Christ We Know.” Secular scholars as well as ecclesiastics respected him, and all who were blessed to know him celebrated him.

John Booty was a man of warmth and humor who loved reading, gardening, and tea on the porch. He struggled at times in life and shared himself freely through his writing and preaching as he brought countless disciples to the Gospel. His last days were populated by loving family, devoted “care angels,” lively memories of his past, and his abiding faith in life everlasting. We are grateful for his life with us, and we rejoice that he has gone to God.

A celebration of John’s life will be held this summer at St. Andrew’s-in-the-Valley Episcopal Church, Tamworth, New Hampshire.