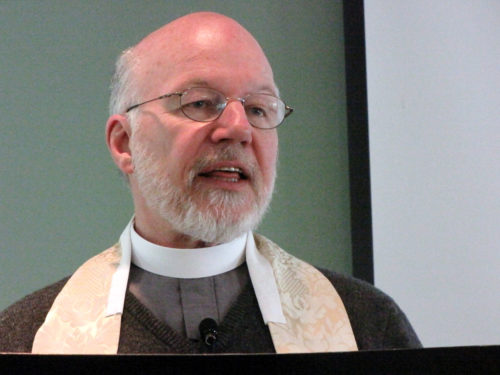 When James Munroe was elected dean of Christ Church Episcopal Cathedral in Springfield, Massachusetts, in late 1997, he told his mother his title would change from “the Rev.” to “the Very Rev.”

“She collapsed on the ground in hysterical laughter,” he recounted recently while leading a parish retreat for St. Peter’s Episcopal Church, Morristown, New Jersey.

Munroe, 66, takes a humble approach to his job as leader of the Diocese of Western Massachusetts cathedral. During the April 19-21 retreat, held at the Tuscarora Inn and Conference Center in Mount Bethel, Pennsylvania, he focused on the grace given to the well-meaning but fallible apostle Peter, who he called an “everyman.”

“He’s a model for me of how the Lord connects to us,” Munroe told ENS. “I’m so thankful for this picture of somebody who’s a good guy [with] a wonderful heart for whom there were disasters and who just totally blew it, who comes to the point of no excuses … and found at that lowest point unconditional forgiveness and love.

“I don’t see the real action of God starting from anywhere but that spot,” he said. “God save me from a church full of victorious Christian saints. Give me a church full of disasters who are finding amazing grace.”

Part of his role as dean is guiding congregants and the community through disasters, both local and more far-reaching. During his time in Springfield, such events have ranged from the Sept. 11 terrorist attacks in 2001 to a tornado that tore through the city a year ago and a gas explosion that flattened buildings several months ago to the April 15 bombings at the 2013 Boston Marathon.

His first role when such events occur is with the cathedral congregation: “Embrace the experience and address it and provide a place for people to acknowledge the fear and the pain and pay attention to it,” he said. His second role, as dean and often in conjunction with the bishop, is saying: “What can we be doing right away?”

“After 9-11, there were instantaneously some [worship] services at the cathedral, and then in the weeks following lots of gatherings with rabbis and imams talking together,” he said. “So there’s a more diocesanwide role of offering worship and offering forums.”

The importance of interfaith dialogue and cooperation at such times is “huge,” he said. “We’re thankful to have a wonderful local rabbi and a very terrific imam and some other people involved in the mosque who are eager when these things happen to meet with us and to present a front of brotherhood and sisterhood in the face of all the fears that come crashing to the surface instantly.”

The two bomb explosions near the finish line of last week’s Boston Marathon that killed three and maimed or injured more than 150 others resonated in a personal way for the former Marine, who was wounded after serving two uneventful months in an artillery unit in Vietnam.

“All was quiet,” he recalled. “And then one night, completely unexpectedly, our unit was attacked and overrun by a unit of North Vietnam soldiers. I ran out and got in a foxhole, and two grenades were thrown into the foxhole, which exploded.”

The blasts killed the man beside him. “I had a fractured skull, punctured eardrums and shrapnel holes. Everything healed physically except for a loss of hearing in my ears. They’ve rung [since] Feb. 23, 1969.”

“When I saw the videos of the two explosions actually happening [in Boston], I understood that the people within the blast zone were having the experience I had and that it is an experience that is impossible to describe with words,” he said. “I also knew that that moment would be a defining moment that they would seek healing from for the rest of their lives and that it may well be years before they’re even ready to begin that healing. For me, when I came home and got out of the Marine Corps, I went back to college and thought … that chapter’s over.”

Only years later did some of the post-traumatic stress of that experience surface. He told retreatants about his surprise at how profoundly shaken he suddenly became 20 years later after a group he was with was mugged in Nairobi’s “Freedom Park,” and how he found grace and healing in the embrace of a woman who greeted them with song and dance at a church they visited. Although they shared nothing in common except that one encounter, he said, “I count her as one of the greatest gifts I have received.”

Munroe’s role as a guest speaker and preacher dovetails with his work as a member of the Veterans Education Project.

“Our purpose is to speak in public forums about our experience,” he said. “Although we’re apolitical, we’re also a subversive group in that we believe that the reality of our stories of what war and combat are actually like will have the effect of saying, ‘Let’s do eight quadrillion other things before the last resort of war because it is so horrific.’”

Veterans of various wars, they speak at churches, schools and prisons. “That has morphed over into my work as the dean. Those two worlds have had some connections,” Munroe said. “So we have gatherings at the cathedral for peace and war-related events.”

Christ Church is a “mid-size” cathedral downtown in a city struggling with drugs and other urban issues. It supports various outreach programs and is allied with Nehemiah Ministries, an intentional Christian community located in a troubled area of the city.

On Good Friday, Nehemiah joined with the cathedral for Stations of the Cross. “I picked out 14 places on the streets of Springfield where bad and good things have happened,” Munroe said. About 80 people participated in the two-hour service, which started outside the cathedral and included prayers and stories of what happened at each station.

One stop was the steps of Sympathy Hall, where a homeless man froze to death. Another was where a homeless gay man, a “dear sweet friend” who was afraid to go into a shelter, was murdered over a bottle of alcohol. Steve Donohue’s funeral was “bigger than any Easter service,” Munroe recalled.

He created the Stations of the Cross after the new diocesan bishop, the Rt. Rev. Douglas Fisher, told him about doing such a service on the streets of Manhattan.

A team approach and sharing of ideas mark Munroe’s modus operandi as dean.

“I’m no good as a solitary, visionary leader. If I do any leading, it’s because somebody else wants to lead with me,” he said. “I’m always thankful to have around me people who come up with ideas and visions. I really never up with anything on my own.”

As dean, he said, “A large part of my role is to be the pastor of the congregation. … I think probably my gifts are more in being a parish priest than in being a diocesan leader, or at least that’s what I enjoy.”

About 215 people attend services at the cathedral on an average Sunday. “One of the privileges of coming to the cathedral was its extraordinary diversity of black, white, tan – every conceivable skin color. We have a service in Spanish every Sunday, which is a great joy,” he said. For that service, “I’ve even learned how to play the drums a little bit. I am a beginner, but it’s fun.”

“We do not call ourselves two separate congregations,” he noted. “The work we’re called to do is to have these different cultures interact and connect with one another,” preserving what’s unique in their own cultures and ways of worship, he said.

The congregation also includes members from Africa and the Caribbean. “On Pentecost Sunday, we read the story from Acts 2 in about 15 different languages.”

Within the city, Munroe also is secretary and one of two Caucasian clergy belonging to the Pastors Council of Greater Springfield, composed primarily of African-American clergy serving African-American congregations. “These are wonderful brothers and sisters in Christ who welcome me into, as much as is possible, the black experience of worshiping. They come once a year and have a worship [service] at the cathedral.”

The role a cathedral plays in a diocese “depends to a certain degree upon the bishop,” Munroe said. “Our new bishop seems to be eager to have the cathedral play a central role.

And Munroe continues to step outside the cathedral doors.

“I do speak from time to time in different places, and I love preaching,” he said. “I recently gave a forum on preaching for some of the lay leaders of the diocese. “I’ve always thought that in retirement it might be fun to go teach a homiletics course somewhere.”