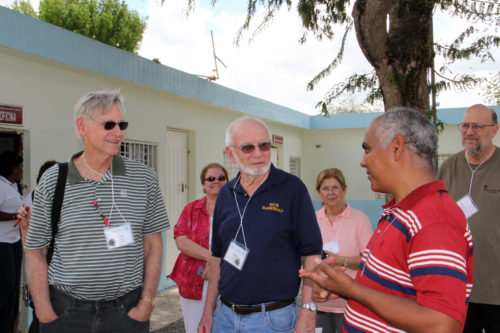 [Episcopal News Service – Santo Domingo, Dominican Republic] The microbus carrying Episcopalians from Michigan and South Carolina hugged the Caribbean coastline as it traveled east on Highway 3 from Santo Domingo to Boca Chica, the first of seven stops to visit missions and ministries of the Iglesia Episcopal Dominicana. In the days following, the microbus would go west and then north, stopping at churches, schools, health clinics and child-care and elder-care facilities.

La Iglesia Episcopal Dominicana and its ministries are growing and thriving through strong leadership, evangelism and the help of its many U.S.-based partners.  In 2012 alone, 70 mission teams from the United States visited the Dominican Republic.

“It has a lot to do with ’emprendedor’ [enterprising] of the bishop [Julio C. Holguín] and his vision for moving the church forward,” said Bishop Wilfrido Ramos-Orench, the Episcopal Church’s global partnerships officer for Province IX.

Clergy and laity have taken ownership and shared in that vision along with the Dominican Development Group, he added. “The goal is to be self-sufficient through partnership by 2015.”

It is a model, said Ramos-Orench, that can be learned from across Province IX, which in March of 2012 adopted self-sufficiency as a focus. [The Diocese of Puerto Rico, which operates an extensive health-care system, is the only self-sufficient diocese in the province.]

The Dominican Republic occupies the eastern two-thirds of the island of Hispaniola, with the other third belonging to Haiti, where the Episcopal Church’s largest diocese is located.

The Dominican diocese has grown by 20 percent in the last 10 years and decreased its dependency on the Episcopal Church from 84 percent to 18 percent in the last 20. Since 1991, the number of churches has grown from 24 to more than 70 missions and preaching stations, including 37 church buildings up from 13. The number of schools has increased from seven to 27, according to statistics kept by the Dominican Development Group. And in 20 years, the number of Episcopalians in the Dominican Republic has grown from 2,500 to 8,000.

Evidence of that growth can be found in both of the Rev. Adolfo Moronta’s churches. At San Pablo y San Lucas in San Isidro, his congregation of 50 to 60 people is preparing to begin construction on a church building. At De La Gracia in Boca Chica, Moronta took the congregation from two members to 42 members in six months.

The church is growing, he said, because of its strong connection to the people.

“We can have a personal relationship with people, visit their homes and get to know their families and their needs and also what their talents are [for lay leadership in the church],” Moronta told ENS. “We’re not just healthy spiritually, but pastorally.”

On April 14, more than 2,000 people gathered for a Eucharist celebrating the diocese’s growth, 116 years of existence and 100 years in the Episcopal Church. Those attending included some 70 Americans in companion relationships with the diocese.

One hundred years in the Episcopal Church holds great significance, Bishop Holguín told ENS, because, “even though we live on an island, we are not isolated.

“The celebration moves us forward to carry out the mission of God; we are a mission church, and that is what we are celebrating, mission,” he said. “That’s why we say ‘encountering mission’ and wanted the participation of companion dioceses.”

The diocese has more than a dozen companion relationships with U.S. dioceses, including East Carolina, Eastern Michigan, Michigan, Western Michigan, Georgia, Nebraska, Northwest Texas, South Carolina, Virginian, Southwest Florida and Western Louisiana. Most, if not all, were represented at the Eucharist and in the preceding days during a three-day encounter hosted by the diocese to educate its partners about the church’s mission projects across the country.

Many of the visitors from the United States stayed on for the bus tour to visit churches and diocesan ministries April 15-17, including members of all three lower Michigan dioceses.

A few years ago, three bishops representing the three lower peninsula dioceses in Michigan – Easter, Western and Michigan – traveled to the Dominican Republic on an exploratory trip and quickly learned “it was not about money, but about bringing people together,” said Eastern Michigan Bishop Todd Ousley, during the encounter, “Juntos Podemos: Encuentro en Misión con Iglepidom” or “Together we can: Encounter in Mission with the Episcopal Diocese of the Dominican Republic.”

“Mission like is about relationship, and it takes time,” said Ousley.

Time spent building relationships in the Dominican Republic has opened “our eyes to the possibility of a revitalized spirit,” he said. “We’re a small diocese and small churches, so relationship is key for us. And it’s the same here, [Bishop] Julio helps me see that.”

The Rev. Bonnie Smith, deacon at St. Paul’s Episcopal Church and Calvary Lutheran in Elk Rapids in the Diocese of Western Michigan, had visited the Dominican Republic before as part of a team of medical professionals. A pediatric nurse, she jumped at the chance to visit the church as a representative of her diocese and to evaluate how best the diocese might get involved more closely, she said.

She was impressed by the diocese’s many building projects underway, as well as its energy and spirit, she said.

“Evangelism is coming from the heart,” Smith said. “In the U.S. we tend to be more cerebral.” 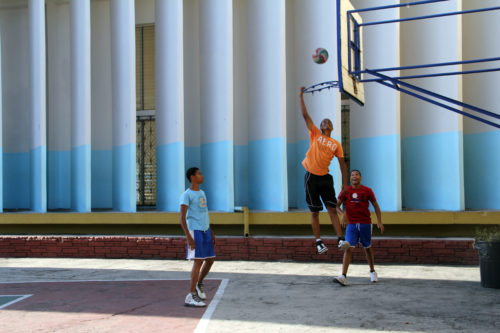 This year, 60 mission teams already are scheduled to visit the diocese, said Bill Kunkle, incoming executive director of the Dominican Development Group. He will take over for Bob Stevens, who has led the organization since its founding and will continue to work with the church in Province IX as a consultant.

Kunkle, a building contractor and a member of St. Mark’s in Tampa, Florida, first visited the Dominican Republic in 200. From there, he said, mission slowly wrapped itself around everything in his life.

Part of his job, he said, is to continue to build strong companion relationships in mission, but he also confronts challenges. For instance, the diocese is looking at new ways to fund the operation of Clínica Esperanza y Caridad, a public-health clinic in the coastal town of San Pedro Macorís that served more than 20,000 patients last year.

The clinic is staffed by the government’s public-health ministry but operated by the diocese, which also offers an HIV/AIDS program out of the clinic run by Dr. Michael Dohn, a long-time missionary. As funding for HIV/AIDS programs has begun to dry up, the diocese needs to find another way to fund the clinic, Kunkle said. 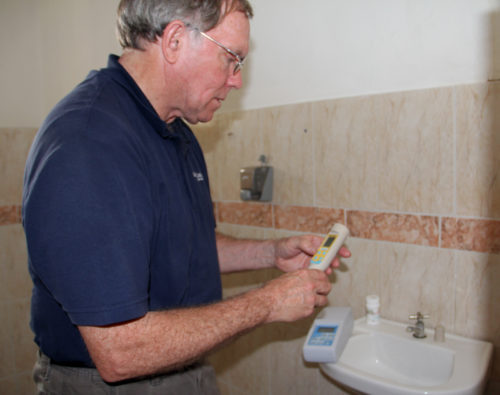 Patrick Haughney, director of international programs for Water Missions International, and a member of St. John’s Episcopal Church in Charleston, South Carolina, test the water quality at one of the stops on the bus tour April 15. Haughney tested the water at all of the stops for turbidity, salinity and other measures of water quality. ENS Photo/Lynette Wilson

On April 15, the bus tour stopped at the clinic.  The bus also stopped at various schools and proposed technical schools and churches. Participants learned that tourism, agriculture and manufacturing in free-trade zones provide most of the country’s job opportunities, but in some regions the unemployment rate exceeds 60 percent and can reach 80 percent.

The hardest thing for Americans engaging in mission in places like the Dominican Republic, where 18 percent of the population lives in extreme poverty, is suppressing the urge to take over, said the Rev. Linda Sue Crane, deacon at Grace Episcopal Church in Port Huron in the Diocese of Eastern Michigan.

“We’re here to show them that they can make their dreams happen,” she said. “As deacons we are icons of the church. Our job is to go out into the world and bring the needs back.”

“These are people who really live the way Christ intended us to live, they share everything,” she said. “What we can do really is a drop in the bucket.”

— Lynette Wilson is an Episcopal News Service editor and reporter.