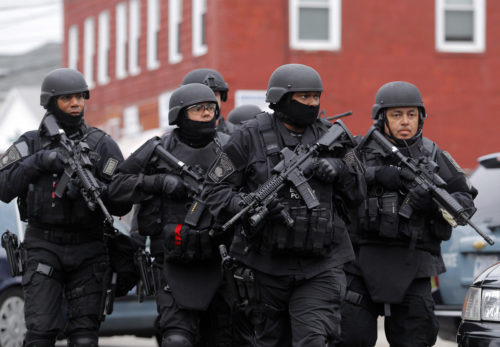 SWAT teams enter a suburban neighborhood to search an apartment for the remaining suspect in the Boston Marathon bombings in Watertown, Massachusetts April 19. Reuters/Jessica Rinaldi

[Episcopal News Service] The Rev. Amy McCreath awoke in Washington, D.C., April 19 to learn that her parish of Church of the Good Shepherd in Watertown, Massachusetts, was close to the epicenter of an unprecedented manhunt for the second of two suspects in the Boston Marathon bombing. She also soon learned that the Episcopal Church sometimes is really just a small parish.

Soon after a call from her bishop, the Rt. Rev. M. Thomas Shaw, SSJE, of the Diocese of Massachusetts, McCreath’s phone kept ringing. And people sought to connect with her in other ways.

“I’ve heard from quite a few bishops and parishes all over the country – and friends – and I’ve been just very moved and amazed by the power of social media and the connectedness we have through the Episcopal Church,” she told Episcopal News Service.

“Within half of waking up this morning, it was really clear that there was this whole cloud of witness who were praying for us — what a gift that is,” McCreath said in a telephone interview conducted as her husband, Brian, drove her and their children home after spending spring break in Washington, D.C.

As soon as she learned the news, McCreath said she, one of the wardens of the parish and an intern began contacting parishioners. “Every person in the parish that I called to check up on them and to ask how they were doing, their first response was [to ask] what can I do, what can I do to help,” she said. “They started making phone calls. They started praying.”

Several parish members live in East Watertown, “one family really on the street where a lot of the action is happening,” she said, adding that she had spoken briefly to one woman in that area who was welcoming neighbors into her home “who were trying to stay safe.”

“I just let her know we are praying for her and I asked several people just to pray for those people in Watertown,” McCreath said.

Before coming to Good Shepherd in 2010, McCreath was the Episcopal chaplain at Massachusetts Institute of Technology. MIT Police Officer Sean Collier, 26, of Somerville, was killed at about 10:30 p.m. April 18 during what the Boston Globe called “a chaotic, violent night” that preceded the April 19 manhunt.

“My heart goes out to the MIT community. I’m a huge a fan of the MIT police,” McCreath said. “They’re top notch. I am grieving with them as they mourn the loss of a fine colleague.”

Events began to unfold on the evening of April 18 after the FBI released photos of two then-unidentified men they called “armed and extremely dangerous.” They had asked the public’s help in identifying the men but added a cautionary warning.

FBI Special Agent in Charge Richard DesLauriers said during a press conference just after 5 p.m. EST that “no one should approach them. No one should attempt to apprehend them except law enforcement.”

MIT police received reports of gunfire at 10:24 p.m. April 18, the Globe reported, and four minutes later there was a report of a robbery at convenience store near MIT. Early reports on April 19 that the brothers turned out to be incorrect. A minute after the robbery report, a MIT police officer was found shot and killed in his car, according to the Boston Globe.

Two minutes later the brothers are suspected of carjacking a Mercedes SUV, the Globe said. The car’s owner escaped. The owner said the brothers identified themselves as the marathon bombers, according to several media reports. 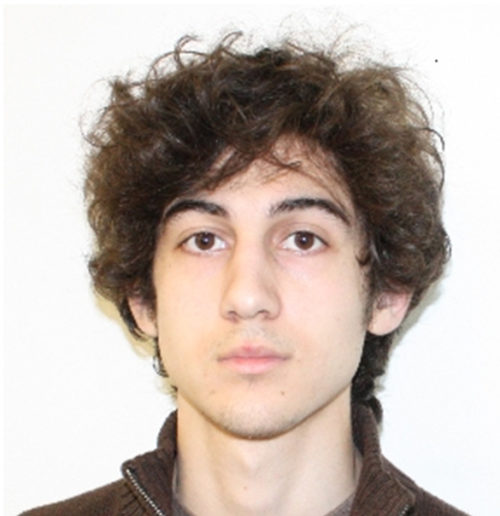 Police have been conducting an intense search, as times going door to door, in Boston and some surrounding communities for Dzhokhar A. Tsarnaev, 19. Photo/FBI

The two men led police on a chase during which they fired at police. Massachusetts Bay Transportation Authority Transit Police Officer, Richard H. Donahue Jr., 33, was wounded. The Globe reported that 10 officers were being evaluated at St. Elizabeth’s Medical Center in Brighton after they were injured by explosives thrown from the car.

During the gunfight, Tamerlan Tsarnaev, 26, apparently got out of the car and was wounded. At some point, his younger brother, Dzhokhar A. Tsarnaev, 19, ran over Tamerlan as he fled in the car, according to several media reports.

Tamerlan Tsarnaev was brought to Beth Israel Deaconess Medical Center emergency room about 1:10 a.m. with multiple traumatic injuries. Doctors told the Globe that those injuries included both gunshot wounds and explosive-caused wounds. He was pronounced dead at 1:35 a.m.

Details of the overnight mayhem and the ensuing manhunt keep emerging and changing. The Boston Globe is updating its coverage here.

The Rev. Samuel T. Lloyd III, priest-in-charge of Trinity Church Copley Square, told his parish April 19 that the Rev. Patrick C. Ward, Trinity’s associate rector for worship and communications who lives in Belmont, reported “that much of the gunfire of the night was happening only blocks from his home.”

In his letter to the parish, Lloyd said that “in moments like this it’s crucial for us to remember who we are and whose we are.”

“Amid the tension and anxiety of the moment, we remain a people held in God’s love, certain of our ultimate safety in God’s providential care, and called to be Christ to each other and our city in even the hardest of times,” he wrote.

Nearly one million people in Boston and nearby Watertown, Waltham, Newton, Belmont and Cambridge, were told to “shelter in place” — stay inside and not open their doors to anyone, except police with proper identification. Thousands of police officers have spent April 19 conducting an intense search, at times going door to door, for Dzhokhar Tsarnaev.

The search has also led to the sudden shutdown of the MTBA’s commuter rail, bus and subway services. Taxi service was shut down. Officials asked businesses across the area not to open.

The Associated Press reported that the suspect brothers came from the Russian region near Chechnya, which has been plagued by an Islamic insurgency. The two had been living together on Norfolk Street in Cambridge, about two miles from Episcopal Divinity School.

Shaw asked early on April 19 for prayers while police conducted their search.

“Given the ongoing police activity that you are no doubt seeing on the news, I want to let you know that we have been in touch this morning with our chaplains at the Massachusetts Institute of Technology and Harvard, and with the clergy and wardens at the Church of the Good Shepherd in Watertown, and everyone there, as well as at Episcopal Divinity School, are safe, as far as we know,” he told clergy and diocesan leadership early on April 19.

“Please pray for all in the affected communities, and pray for a speedy and violence-free resolution to these disturbing events.  Keep watch, Lord, with those who work or watch or weep this day.”

The diocesan offices and the Cathedral Church of St. Paul office near Boston Common at 138 Tremont Street in Boston were closed.

Members of both Good Shepherd and Trinity Copley Square gathered in prayer for the victims of the Boston Marathon bombings earlier in the evening of April 18. During its weekly Hidden Brook contemplative prayer evening service, Good Shepherd included prayers for the victims of the bombing and “support for the rest of us in dealing with the tragedy.”

What Lloyd called “a goodly number of Trinity parishioners” gathered for a service of music and prayers at the intersection of Berkeley and Boylston streets, which he said has become the main gathering place for taking in the deserted landscape in and around Copley Square. The marathon’s finish line is on Boylston just yards from the west side of Trinity’s building.

During the service the choristers led us in singing “Amazing Grace” and “America the Beautiful.” New media hovered to capture the scene, Lloyd said.

“I can’t tell you how good it was to see the faces of our Trinity community, the strength it brought to catch up with one another, the assurance it gave that we’re all in this together.”

April 21, the Fourth Sunday of Easter, is known as Good Shepherd Sunday because the gospel appointed for the day is John 10:22-30, a portion of the story in which Jesus calls himself the good shepherd who lays down his life for his sheep. Thus, it is the patronal feast day of congregations known as Good Shepherd. The church in Watertown had planned a newcomer’s brunch for Sunday, and McCreath said the parish still plans to host the meal.

“But I think it’s going to turn into an all-comers brunch,” she said. “Anybody in the community who wants to be there to be in community and to share stories and find courage is welcome to come.”