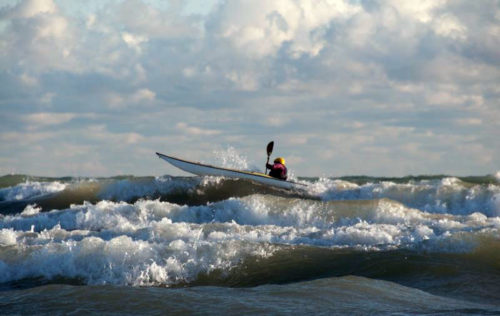 The Rev. Bonnie Perry, rector of All Saints, Chicago, kayaking on Lake Michigan.

“It’s insane that we’ve got young people being killed regularly on the streets of Chicago,” the rector of All Saints Church in Chicago said during a recent interview with the Episcopal News Service. “If you’re continually immersed in that kind of sadness and pain, we get beat down.”

It renews her spirit to “paddle and bring people to wild places along the coastline of Lake Superior, [and] along Scotland where most people have never gone and it’s awe-inspiring,” she said. “The ocean’s huge, and you can’t ever control it. You have to be in the now, responsive to the environment.”

Perry and other Episcopal clergy say their hobbies help them “get a life outside the church” and sometimes bring them right back to it again.

Clergy and others need an “on-off switch” between who they are and what they do, according to Elaine Hollensbe, a consultant to CREDO, a Church Pension Group program which for 15 years has offered opportunities for clergy and some lay church employees to examine specific areas of their lives and re-generate their passion and commitment to health and wellness.

“You need to carve out a place for yourself where there’s a balance between your own individual unique interests and traits and desires and those of the collective, which in this case would be the priesthood,” said Hollensbe, an associate professor of management at the University of Cincinnati.

Some clergy she has interviewed “were fairly good at just saying OK, right now I’m a father, I’m not a priest. But some other priests weren’t able to do that,” she said.

“If you don’t, you experience a lot of stress, and don’t have a sense of you other than your work. It’s important that people find a level of balance to find a separate self that rejuvenates, so when they contribute to the collective they have the energy and reserve to do so,” she added.

A kayaker since 1995, Perry’s avocation and vocation sometimes merge. At Easter, she said, “Jesus will get up from the dead and … I’ll get on a plane and lead a women’s kayaking retreat in Baja, Mexico.” 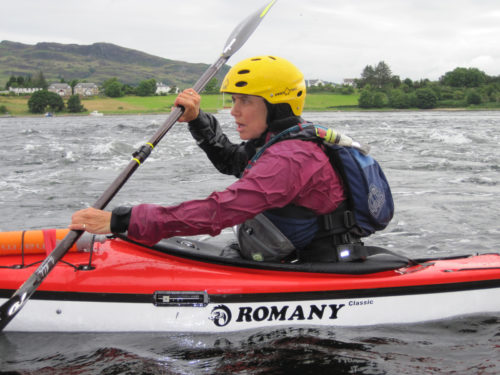 the Rev. Bonnie Perry, rector of All Saints, Chicago, kayaking at the Falls of Lora, Oban, Argyll, Scotland.

She began “really seriously” teaching and coaching others in the sport about seven years ago. She has earned numerous certifications and is one of four women in North America certified as a British Canoe Union 5-Star Leader on the Sea, “which is fairly obscure, but it’s really cool if you understand what I’m talking about,” she said.

“Trying to keep eight people in their own craft safe in the midst of 20-knot winds and six-foot waves … flows into what I do in the congregation, trying to figure out how best to lead so people can have the most fun, but you don’t want them crashing into the rocks,” she said. “But you can’t control, you can lead and offer suggestions.”

Some people come to All Saints because “of the paddling connection,” she noted.

And there are other ways her vocation and avocations merge. “Last year, one of my students died while paddling around Lake Superior. I wasn’t there; he was on a solo trip. So I ended up doing a memorial service for him at one of our symposiums. It’s not a sport without risks, but you try to mitigate them.”

‘One-two for the Lord’ – Boxing in Houston

The Rev. Patrick Miller, rector of St. Mark’s Episcopal Church in Houston, jokes that he initially started boxing after one too many altar guild meetings.

“I would be in these meetings and I would be really mad, and being mad in an altar guild meeting is just wrong,” said Miller, 46, during a recent telephone interview.

That former church happened to be located across the street from the Main Boxing Gym in Houston. He wandered over one day and decided to try boxing as a Lenten discipline and for the exercise.

“In boxing, there are three-minute rounds with a one-minute rest,” he said. “If you look at that as a metaphor for living, you see there are certain amounts of times in our lives where we have to be in the fight, and there are times when we have to rest, and you have to take advantage of that rest in order to stay in the fight.”

He noted other boxing-isms: “My trainer talks about identity. He’ll say, ‘Patrick, I’m having a bad day, but you know what? I’m still Bobby Benton, and I’m going to be OK.’”

Miller receives good-natured teasing that his quick combination, a fast flurry of left- and right-handed blows, is “a one-two for the Lord.”

Meanwhile, some sparring partners have become parishioners. Some ask for prayers before a fight and during life’s challenges, like divorce and family deaths, Miller said.

The experience has given Miller a new perspective about how to handle himself during church meetings. Recently, he said, “in the middle of the conflict, dealing with someone trying to hit you and you trying to hit them,” he heard his trainer’s voice: “Slow down. Breathe. Duck. Move on him. Think about what’s going to happen next.”

Boxing reminds him to listen intently during church meetings, he said. “I go to these altar guild meetings now, and I don’t get mad anymore.”

Most Saturday evenings from December to March, the Rev. Gay Jennings begins an eight-hour shift – not as a priest, but as a volunteer ski patroller on the slopes near her suburban Cleveland home.

“People say, ‘You ski in Ohio?’ There are two ski areas about three miles from my house in the Cuyahoga Valley National Park, a glacier-created valley, and there are ski areas on either side of the valley,” said Jennings, president of the Episcopal Church’s House of Deputies, during a recent telephone interview. “They’re small. We say it’s better than not skiing.”

She bundles up in very warm clothing, boots and patrol jacket, buckles on a patrol pack and steps into ski bindings in preparation for volunteer shifts that may be unpredictable.

Sometimes, “it’s like a MASH unit,” she said referring to the mobile army surgical hospitals used for front-line emergencies. Considered first responders, she and her team of about 10 receive extensive off-season first-aid and other training as outdoor emergency-care technicians.

“We ski and scan the slopes to make sure it’s safe,” said Jennings. “Injuries can range from somebody coming in the patrol room and asking for a Band-Aid all the way to a serious head injury or a broken femur, which require getting the person off the hill quickly and safely so that the next level of emergency care can transport them to a hospital,” she said.

When she began volunteering 23 years ago Jennings, 62, was canon to the ordinary in the Diocese of Ohio. Her life seemed as though “everything was church.”

On the patrol, she’s served with the same “eclectic” team – an architect, a mechanic, an engineer, college students, a community organizer – for about 15 years.

“Some of us go to church, and some of us wouldn’t go near a church,” she said. “We watch out for each other on and off the slopes. We eat dinner together; we do potluck. It’s kind of like church.”

Her involvement has led to requests that she officiate at funerals and weddings of other ski patrollers over the years, and she believes being part of the group has made her a better priest, Jennings said.

It has “provided recreation, fellowship, friends, a balance in my life. It’s forced me to exercise, even though sometimes it’s awfully cold,” she said. “It’s made me a better priest in the sense that it gets me out of church. Obviously, that is the main focus of my vocation and ministry, but I think you can have too much of a good thing. So, for me, the ski patrol provides balance and a lot of fun.”

Handcrafting, planing, sawing, sanding, assembling and finishing furniture has been an avocation for San Diego Bishop Jim Mathes for 30 years.

Over time, he has built shelves, desks and coffee tables to furnish the homes of friends and families; about half the time he works from plans purchased on the Internet. “The other half I design,” he said via e-mail.

Recently, he created a 52-bottle mahogany wine rack to auction during a fundraiser to benefit Episcopal Community Services, a diocesan agency providing social services to low-income families and individuals. The sale earned $1,000.

“I chose … mahogany because it is a wood that I like to work with,” Mathes said. “It looks beautiful with semi-gloss varnish.”

Woodworking allows him “time when I create something tangible,” he said. “I take my mind totally off of the church – if I didn’t, I wouldn’t have all my fingers!”

‘North Carolina: A theology of foolishness’ 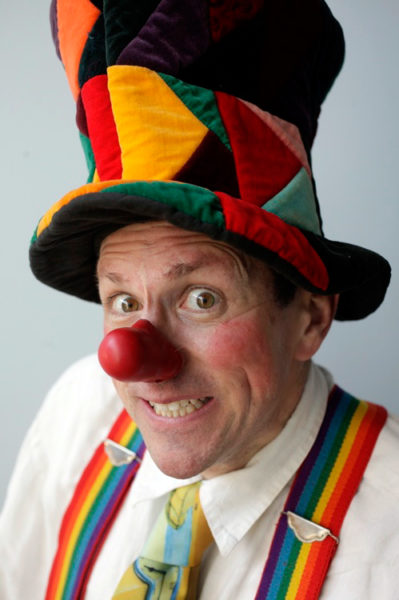 The Rev. Joseph Hensley Jr., as Ashes, the clown.

The Rev. Joseph Hensley Jr. says clowning, and more specifically his clown character Ashes, are part of a theology of foolishness that “shake things up and helps others look at the world differently.”

He has performed as Ashes – with oversized black pants and rainbow suspenders, big red nose, red cheeks, crazy hats, haphazardly fastened tie and white shirt, black Converse All-Star shoes and sometimes an accordion – in venues as varied as St. Luke’s Church in Durham, retirement communities and in the middle of the Miami Airport while returning from a church mission trip to Belize.

“It’s about being able to take this crazy character into places where there might be a need to spread some joy,” said Hensley, assistant to St. Luke’s rector, during a recent interview with ENS.

The name Ashes comes from the children’s nursery rhyme, “Ring Around the Rosie,” said Hensley, who will lead a workshop during the June 10-14 Kanuga Conference Center’s Christian Formation Conference in Hendersonville.

“As church leaders, we are expected to look impressive,” said Hensley, 39. “In some ways I think there’s this expectation that we give ourselves and that other people put on us, that we have to behave in certain ways and do certain things. In ministry, what I’ve tried to do is turn that upside down.”

Like in the nursery rhyme, which ends with “we all fall down,” the spirit of clowning “helps give us a sense of courage to be willing to fail – but to fail with grace and with humility, and, to me, that’s a big part of the life of faith.”

— The Rev. Pat McCaughan is an Episcopal News Service correspondent.