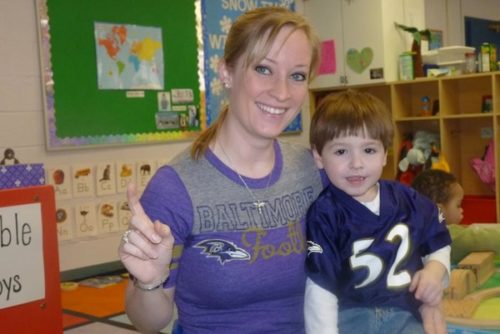 Erika Brannock, 29, who teaches preschoolers at Trinity Episcopal Children’s Center in Towson, Maryland, is recovering after losing part of her left leg because of injuries she suffered in the Boston Marathon bombings. Photo/Russell Street Report

[Episcopal News Service] Erika Brannock, 29, who teaches preschoolers at Trinity Episcopal Children’s Center in Towson, Maryland, has lost part of her left leg after being injured in the Boston Marathon bombings.

Brannock and her sister, Nicole Gross, 31, a personal trainer at Charlotte Athletic Club in North Carolina, were at the finish line to meet their mother, Carol Downing, as she completed her third marathon. Gross had reportedly helped Downing train for the race.

The blast broke both of Nicole Gross’s legs and she also suffered a severed Achilles tendon, according to media reports.

Brannock, Gross and Gross’ husband, Brian, were outside the LensCrafters on Boylston Street, one of the bloodiest sites along the course, according to the Baltimore Sun newspaper. 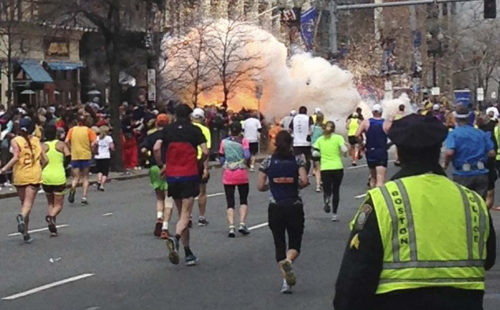 Runners continue towards the finish line of the Boston Marathon April 12 as an explosion erupts near the finish line of the race in this photo exclusively licensed to Reuters by photographer Dan Lampariello. Two simultaneous explosions ripped through the crowd at the race’s finish line, killing at least two people and injuring dozens on a day when tens of thousands of people pack the streets to watch the world-famous race. REUTERS/Dan Lampariello

Downing, of Monkton, Maryland, was running a half mile from the finish line and was not injured. The Sun reported that it took her six hours to find her daughters.

Brannock was raced to Beth Israel Deaconess Medical Center, where doctors amputated her left leg below the knee, Brian Gross told the Boston Globe newspaper. Doctors are also “keeping an eye on the other leg and are concerned with her foot,” Gross said.

Photos of Nicole Gross taken moments after the blast appeared in several newspapers and online. The family issued a statement April 17 asking the media to stop using the images, saying they are “tremendously painful” for the family, according to WUSA television station.

Trinity Episcopal Church will hold a prayer service at 7 p.m. April 17 “for healing and restoration in continuing support of all those affected the violence in Boston, especially Erika Brannock and her family,” according to the church’s website. Episcopalians from nearby Church of the Good Shepherd in Ruxton and Holy Comforter in Lutherville will be part of the gathering. 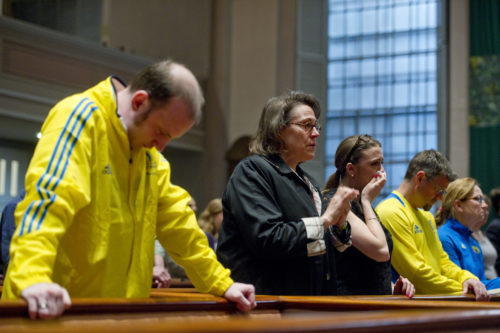 Jonathan Ralton, left, of Boston, and runner Kelly Daughtery, of Portland, Oregon, third from right, pray during a Eucharist and Vigil for a Day of Violence at the Episcopal Cathedral Church of St. Paul near Boston Common on April 16. Ralton was volunteering at the Boston Marathon a little over a block away from the blast. AP Photo/The Christian Science Monitor, Ann Hermes

“She is such a Ravens fan, we’re going to have an honorary Purple Friday and photograph it and send it to her and her family,” the Rev. Kenneth H. Saunders III, Trinity’s rector, told the Globe. “The children have rallied around at school. We’re just praying for her and that she comes back to us soon.”

The Los Angeles Times reported that family and friends were setting up a fund to help pay for her medical care, educational and living expenses after her return home.

Brannock was one year from finishing her master’s degree in early childhood education, said Liz Harlan, the former director of the Trinity Episcopal Children’s Center, according to the Times. She told the Times that she hired Brannock to work at a new preschool after observing her skills in the classroom—where she said Brannock instinctively knew when a child needed to nestle into her lap or take a walk down the hall to avoid a meltdown.

The National Association of Episcopal Schools called for prayers for Brannock and her family. The NAES has also posted resources to help schools help their students in the wake of the bombings.

Brannock’s cousin Jocelyn Wood-Garrish told the Sun that the teacher was “aware and taking the news [about her injuries] very well,” adding that there were more surgeries to come. Brannock was communicating with the family by writing, and had requested pictures of the students she teaches. “I’m in awe of my cousin’s bravery,” Wood-Garrish said.

The Los Angeles Times reported that Downing said on her Facebook page that Brannock had undergone two surgeries and had many more to go.

A Boston couple took the “panicked, scared and cold” Downing back to their home, according to the Sun, where they gave her something to eat and drink, and had her take a shower. They also gave her a fleece jacket, which she kept, and stayed with her at Brigham and Women’s Hospital, where Gross had been taken, until family arrived.

“With all the chaos and to be in a city where I don’t know anyone, it reminds me that there are some good people in the world,” Downing told the newspaper.