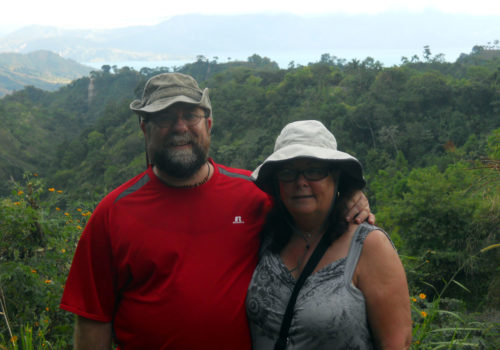 The couple, from Rutland, Massachusetts, and members of St. Francis Episcopal Church in Holden, in the Diocese of Western Massachusetts, arrived on March 4 and have spent the first six weeks of missionary service in the Anglican/Episcopal Church of El Salvador, studying Spanish at the Center for Exchange and Solidarity and living with a host family, completing the Spanish-language immersion experience.

“Language is the biggest challenge,” followed by the heat and the mosquitoes, said Dianne Wilson, 65, a retired municipal government tax assessor.

Before they arrived, Tom Wilson, 50, said “they had a million concerns” related to being “foreigners in a foreign land,” but that the church has done a great job of welcoming them and helping them to acclimate.

The Wilsons first involvement with Episcopal Church missionaries came when they were members of St. Andrew’s Episcopal Church on Martha’s Vineyard, Massachusetts, and part of a support team for a friend who was serving in Kenya. When they moved to St. Francis in 2007, the church had just recently established a relationship with Foundation Cristosal, said Dianne Wilson.

St. Francis had committed to tithing 10 percent to the human rights-based community development organization with roots in the Anglican and Episcopal churches operating in El Salvador, but Cristosal didn’t want the money unless church members planned to visit, she said.

“When we got there, they were just planning their second trip to El Salvador and I wanted to see the other side of it [missionary service on the ground],” said Dianne Wilson.

Tom Wilson, a former finance director for a nonprofit organization, however, wasn’t immediately sold, he said, because the trip didn’t include building anything. Rather than construct “projects” Cristosal works to empower the poor to act for justice and development as equal citizens in a democratic society, and Tom said he didn’t care to have a “kumbaya” moment, but in the end he decided he couldn’t let his wife go to Central America alone.

“Human rights-based development is a hard concept, until you see it,” said Tom Wilson, who later became the chair of St. Francis’ mission committee.

It was the passion, however, of Cristosal’s executive director, Noah Bullock, that set the Wilsons on the path to missionary service, they said.

That was the first of the Wilsons three visits to Cristosal and El Salvador. Their fourth visit came in August 2012, when they spent two weeks living in El Maizal, a small community two-and-a half hours drive from San Salvador and 20 miles from the Guatemala border where the church has a guest house and a farm. The Wilsons will serve out the missionary commitment in El Maizal, and will move there in the coming days.

The Wilsons’ main priority, they said, is to teach English as a second language to the community’s children and interested adults, and to manage the guesthouse which, when up and running, can host 12 people.

There are about 30 cinderblock homes in the area, and also an Episcopal school. It’s an area that was destroyed by earthquakes in 2001 and rebuilt with the help of Episcopal Relief & Development.

In the 1980s El Salvador suffered a brutal civil war, fought mainly over inequality. And in the years following the 1992 United Nations-brokered Peace Accords, the smallest, most densely populated country in Central America has experienced a number of devastating natural disasters. It has one of the highest murder rates in the world. Inequality continues to persist, with some 50 percent of adult population unemployed and 47 percent of people living in extreme poverty.

The couple has committed to three years of service, and they understand that the journey will not be easy.

“This is a hard life, not to mention what you are going to witness – people live in abject poverty,” said Dianne Wilson. “It’s an incredibly hard life: We are visiting it, they are living it.”

The Wilsons are blogging about their experiences here.

— Lynette Wilson is and editor/reporter for Episcopal News Service. She is currently based in San Salvador, El Salvador.