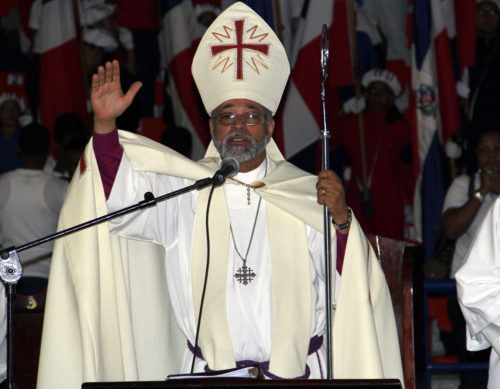 Bishop Julio C. Holguín celebrated and preached during the three-hour, festive Eucharist that marked the end of a three-day conference, “Juntos Podemos: Encuentro en Misión con Iglepidom,” or “Together we can: Encounter in Mission with the Episcopal Diocese of the Dominican Republic.”

In his sermon, Holguín talked about the “great commission” and the duty of all the baptized to engage in mission, as well as the responsibility of Episcopalians to share with others what God has done in their lives so that others can believe. 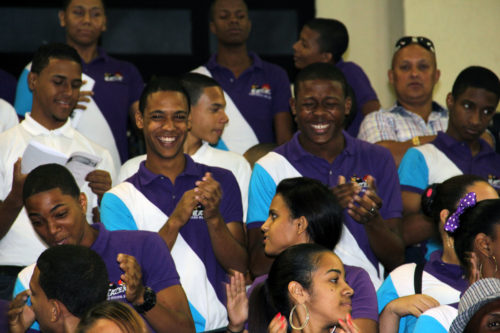 More than 2,000 people attended the Eucharist, including some 70 Americans in companion relationships with the diocese, held at a volleyball pavilion in a government sports complex. Hundreds of young people represented about a dozen of the diocese’s 27 schools, complete with drum squads and flag corps.

“This is one of the biggest celebrations we have had this year and we’ve been preparing a whole year for this,” said the Rev. Adolfo Moronta, vicar of San Pablo y San Lucas, in San Isidro, where his congregation of 50 to 60 people is beginning the process of building a church. “[It’s important] because throughout this time we have preached the Gospel of Jesus throughout our whole country and our church is growing and growing, and this is a way for us to celebrate what God has been doing in the people of the Dominican Republic.”

The diocese has grow by 20 percent in the last 10 years, and in 20 years has decreased its dependency on the Episcopal Church from 84 percent to 18 percent, while increasing its budget five-fold, explained Holguín in an interview with ENS following the service.

“The first thing is that we have assumed responsibility and the second is evangelizing; we know that the church needs to expand,” said Holguín, adding that the clergy and the laity have also undergone a spiritual revitalization and “thanks to that, the church has begun to grow.”

Specifically, Holguín mentioned the United Thank Offering and the Dominican Development Group, which formed in 1998 to assist the diocese with development and on its path toward self-sustainability. Holguín also acknowledged several “great” missionaries who have worked hard for the church over the years, and the companion diocese relationships that have developed over the years, crediting them with helping the diocese to grow.

The diocese has companion relationships with domestic dioceses, including East Carolina, Eastern Michigan, Michigan, Western Michigan, Georgia, Nebraska, Northwest Texas, South Carolina, Southwest Florida and Western Louisiana. Most, if not all, were represented at the encounter.

“I felt that he [the bishop during his sermon] tied it all together with living the Baptismal Covenant and having that commitment [to mission],” said Rebecca Gibson, of Christ Episcopal Church in Winchester, Virginia. “And he tied it in very nicely with the encounter.” 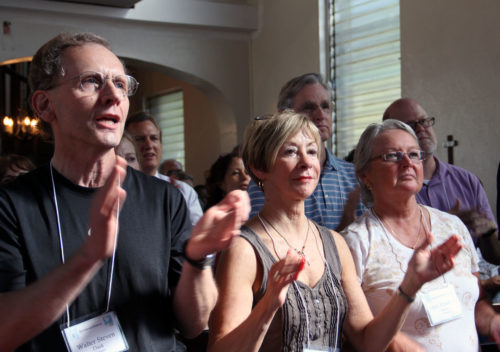 Close to 200 people participated in the three-day encounter, which included workshops covering everything from vacation Bible school; the Dominican Development Group; construction; health, education and social ministries; microcredit programs; and liturgy and spirituality. The encounter, held at Epiphany Cathedral, also included music, dance and an open dialogue to discuss what the participants had learned in the workshops.

“The workshops were to show what we’ve done in 116 years, and what we have done with the support of the American missioners,” said the Rev. P. Vicente Peña, vicar of San Juan Bautista in Bonao, in the country’s center.

Since 1991 the number of churches has grown from 24 to more than 70 missions and preaching stations, including 37 church buildings up from 13; the number of schools has increased from seven to 27, according to statistics kept by the Dominican Development Group.

“I’ve been coming here for four years as part of a construction team and have never been able to pull together the whole mission of the diocese,” said Bob Hills, a member of Church of the Redeemer in Sarasota, in the Diocese of Southwest Florida. “For the first time I see the whole mission. I’m very impressed by what goes on here and I’m proud to be part of it.”

“It’s a great joy for me to be here and experience this wonderful gathering,” said Bishop Wilfrido Ramos-Orench, the Episcopal Church’s global partnerships officer for Province IX, during the encounter.

“I always think that God invites us to be dreamers and dream big. One of my dreams is for each one of our dioceses in Province IX to move toward full development like the Dominican Republic. It is the flagship diocese in our region, and its slowly moving toward self-sufficiency and fullness in Christ.”