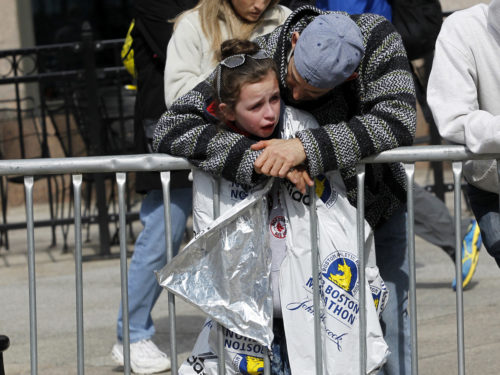 A child is comforted after explosions went off at the 117th Boston Marathon in Boston, Massachusetts, April 15. Two explosions hit the Boston Marathon as runners crossed the finish line on Monday, killing at least two people and injuring more than 80 on a day when tens of thousands of people pack the streets to watch one of the world’s best known marathons. Reuters photo/Jessica Rinaldi

[Episcopal News Service] The seven runners from Trinity Church Copley Square who were competing in the Boston Marathon to raise money for the church’s anti-violence initiative escaped injury in the two explosions that ripped through the race’s finish line that is within 300 yards of the church’s front porch.

The Episcopal Diocese of Massachusetts announced that it will hold a prayer service with Holy Eucharist at 12:15 p.m. April 16 at the Cathedral Church of St. Paul in Boston, with Bishop Suffragan Gayle Harris presiding, “assuming downtown conditions and transit have regularized.”

Presiding Bishop Katharine Jefferts Schori, who is in Okinawa, Japan for the Second Worldwide Anglican Peace Conference, called for prayer following the explosions, and offered the following prayer:

Gracious God, you walk with us through the valley of the shadow of death. We pray that the suffering and terrorized be surrounded by the incarnate presence of the crucified and risen one. May every human being be reminded of the precious gift of life you entered to share with us.  May our hearts be pierced with compassion for those who suffer, and for those who have inflicted this violence, for your love is the only healing balm we know. May the dead be received into your enfolding arms, and may your friends show the grieving they are not alone as they walk this vale of tears.  All this we pray in the name of the one who walked the road to Calvary. Amen.

The two bombs killed three people and injured more than 150 others in a terrifying scene of broken glass, smoke and severed limbs, authorities said, according to an Associated Press report.

The blasts took place almost simultaneously about four hours after the start of the race, and about 100 yards apart, AP said, tearing limbs off numerous people, knocking spectators and at least one runner off their feet, shattering windows and sending smoke rising over the street.

A fire broke out at the John F. Kennedy Library a few miles away and more than an hour later, but no injuries were reported, the police commissioner said. It was not clear what caused the fire or whether it was related to the bombings. A senior U.S. intelligence official said two other explosive devices were found near the marathon finish line.

“Downtown church personnel reached so far report chaos in the Back Bay area and limited mobility,” the diocese reported at 5:30 p.m. April 15. Emmanuel Church at 15 Newbury Street reports no damage, the report said, and the cathedral had cancelled its Monday evening community meal because volunteer servers couldn’t make it into the city.

An hour earlier, Bishop Tom Shaw requested prayers “for the City of Boston and all affected by and responding to this afternoons explosions” and said that diocesan staff were checking in with downtown Episcopal churches.

Some Massachusetts churches responded to the tragedy by gathering in prayer.

The Rev. Timothy Schenck, rector of St. John the Evangelist Episcopal Church in Hingham, Massachusetts, announced on Facebook that the parish would hold a 7 p.m. prayer service.

“All are invited as we pray for the victims of today’s tragedy in Boston and try to make sense of this in the context of our faith,” wrote Schenck, who ran the marathon himself in 2008. “Please spread the word.”

Trinity Church in Rockland, Massachusetts, reported on Facebook: “Church is open now if anyone needs to come and pray. Shaken to the core by what just happened in Boston.”

House of Deputies Vice President Byron Rushing said on the House of Bishops and Deputies listserv that he did not go to the race’s finish line although it is in one corner of the state legislative district he represents and six blocks from his house. Rushing, the assistant majority leader in the Massachusetts House of Representatives, said he instead attended Patriots Day activities at First Church in nearby Roxbury.

The Boston marathon is the world’s oldest annual marathon, having begun in 1897, and is run on Patriots Day, the third Monday in April. The day, which is a legal holiday in the state, commemorates the battles of Lexington and Concord, the first battles of the American Revolutionary War, which took place April 19, 1775.

“Hugely relieved” is how the Rev. Patrick C. Ward, Trinity associate rector for worship and communications, described his feelings in a call to Episcopal News Service about 5 p.m. EST April 15, about two hours after the explosions.

Ward said he and other parish staff members had spent those two hours trying to track down the seven runners, including Richard Webster, the church’s organist and director of music. Trinity staffers who had gone to the race course to cheer on their colleagues also were unharmed, Ward said.

“What [information] I am getting is basically from texts and Facebook because cell service is so awful right now and people aren’t really on e-mail right now. They’re using their phones for texting and updating their status on Facebook,” he said. “I’m just relieved that all of our people are OK.”

About 40 marathon participants from elsewhere came to Trinity for its various Sunday services, and they all received a blessing, Ward said.

Trinity Church was closed for the day because of the race. When initially contacted about 4:30 p.m., Ward said the staff had closed up the building after the last service the evening before.

Ward was continuing to get most of his information from texts and Facebook updates, while watching television reports, as he talked to ENS.

“I’m looking at the news; I am looking at an aerial shot right now, and [the explosion site] is about 300 yards from our front [west] porch,” he said.

The finish line is on Boylston Street about a half block from Copley Square and right in front of the public library, according to Ward. The infrastructure damage caused by the bomb appeared to be isolated to storefronts at the finish line and to the grandstand, he said.

“I don’t think there was any damage to Trinity Church,” Ward added.

“People say, ‘Should we go to church,’ but the whole area is completely sealed off,” he said. “There’s nothing we can do there right now.”

Team Trinity, as it is known, was competing in the marathon via the John Hancock Boston Marathon Nonprofit Program to support the programs of the Trinity Boston Foundation. The foundation’s mission is to “unlock opportunity and change the odds for the youth of Boston,” according to its website. Ward said there is “a strong anti-violence component to the ongoing work that we do.” John Hancock had predicted that participants in its program would raise nearly $7 million during the race.

While the AP reported there was no word on the motive or who may have launched the attack, Ward reflected on the violence by recalling his experience the day before.

He said he was coming to church on April 14 amid a number of foot races that take place the day before the marathon and heard the national anthem being played.

“It was huge crowds but very peaceful and, having lived through Sept. 11, I thought, ‘Oh, we’re beyond that now,’” he said, adding it was nice to be out on the street in such a big crowd “and not feel afraid.”

— The Rev. Mary Frances Schjonberg is an editor and reporter for the Episcopal News Service. ENS correspondent Sharon Sheridan contributed to this story.