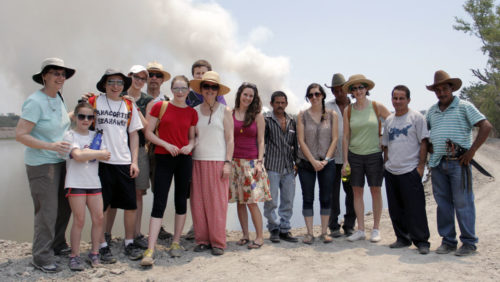 Yet for a group of nine Episcopalians, Lutherans and one Roman Catholic from Anacortes, Washington, recently visiting the Central American country, the isolated village of El Carmen was the main destination. On Easter, they huddled in the bed of a compact, red Nissan pickup and held on to the roll bar and to each other while the driver dodged cattle, washouts, rivers and ruts. They sheltered their heads with hats against the midday sun, and those lucky enough to have handkerchiefs covered their faces with them to filter the dust.

El Carmen is one of four communities – and one of two in the Bajo Lempa, or the lower Lempa River delta – served by Foundation Cristosal, a human rights-based community development organization with roots in the Anglican and Episcopal churches. The group – four adults and five youth – spent March 29-April 5 in El Salvador learning about Cristosal’s human rights-based approach to community development on a “transformational trip” organized and facilitated by the organization.

“[With] traditional mission trips, mission often involves groups of foreigners coming down to do some ‘project’ and help in some way, even if they might have limited knowledge about the country and the people they are serving,” said Olivia Amadon, trips coordinator. “But at Cristosal, we believe that the first step in the process of development is to learn about the country and the people whom we are serving and to learn not only what their needs are but what their assets and desires are.”

“The trips are often only the first step in ‘helping’ or ‘development’ because relationships are formed,” she said. “And our goal is that people will continue to maintain those relationships with the communities and Cristosal.”

In 2010, the ecumenical group entered into a relationship with El Carmen when its youth group raised money to buy the community a new water pump, intended to push spring water up a 90-meter incline into the homes of 26 families. Over the last three years, the group has sold herbs, potted plants and blackberry jam and hosted dinners to help finance this year’s trip to El Salvador. On March 31, group members made it to El Carmen. While meeting with community members, they quickly learned that treating the symptom often doesn’t address the underlying problem. 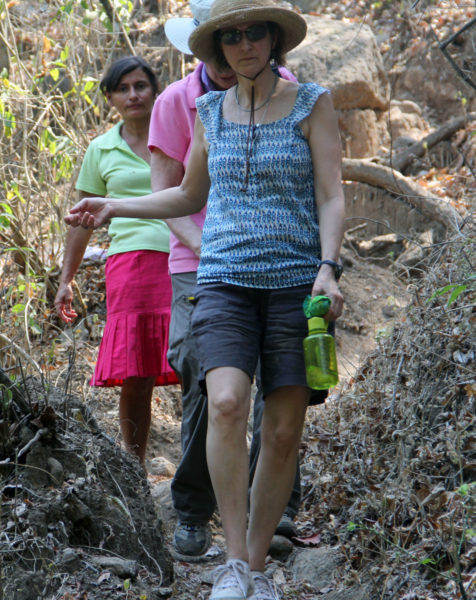 “Just because we provided money for the pump doesn’t mean the problem is solved,” said the Rev. Carol Rodin, a transitional deacon from Christ Episcopal Church in Anacortes, who traveled to El Salvador with her daughter Mari, 17. “And we realize this is not the end. It’s good to hear about the problems so that we can work together to fix them.”

The pump, community leaders said, doesn’t have the needed capacity. But the main problem lies in maintaining the pump that, not unlike the water system in El Salvador, has many moving parts.

“It’s not only the pump, it’s administration. We’re helping them to develop the capacity to administer the system,” said Kenia Quintanilla Cruz, a lawyer and community organizer, during a meeting at Cristosal’s office in San Salvador.

The community has established a water association to manage the system and collect funds from the community – 16 of 26 families are willing or can afford to pay. But when it comes to resolving mechanical issues and making funds available to fix or replacing parts, the association fails, Cruz said. Cristosal’s role is to provide the community with the fiduciary and maintenance skills and training necessary to manage the water system, she said.

The water situation in El Carmen is not unique. More than 20 percent of El Salvador’s 6 million people don’t have access to water in their homes, with 60 percent of rural inhabitants affected. But that could change.

After some six years of pressure from civil-society groups and nongovernmental organizations, a General Water Law was proposed in El Salvador’s General Assembly in March 2012. The law proposes that all Salvadorans have access to clean, plentiful water — a basic human right.

In El Carmen, the water typically runs for two hours every four or five days when the pump is working, water association members told the visiting group. When it’s not working, the community hauls water in plastic canisters from a nearby river up the steep incline.

“I see the people still struggling for basic human dignity and basic human rights,” said the Rev. Josefina Beecher, the former vicar of La Iglesia Episcopal de la Resurreccion in Mount Vernon, Washington, who lived in El Salvador from 1986 to 1994. She was happy to see small successes, such as a chicken farm in El Carmen that Cristosal and community members have partnered to build up, she said. “But I’m sad to see they are still fighting the same battles the war was fought over.”

Between 1980 and 1992, a brutal civil war raged in El Salvador between the right-wing military regime and five guerilla groups organized as the Frente Farabundo Martí para la Liberación Nacional, today the left’s FMLN political party. By official accounts, 75,000 people were killed. After the warring sides signed the United Nations-brokered Peace Accords in 1992, former guerilla fighters laid down their guns and began settling on unproductive lands, including El Carmen in the department, or state, of Usulután in western El Salvador.

The 1980s were the darkest period in El Salvador’s history, said José Osvaldo López, a Cristosal lawyer, who was 10 in 1980. “The greatest number of human rights violations was taking place at a time when people were demanding their rights,” he said while speaking to the Washington group about human rights. “I was a boy when [Oscar] Romero was killed, and I couldn’t understand. He was untouchable. For me, well, everyone in this country regarded him as a saint. All he did was denounce injustices, and for that he was killed.” 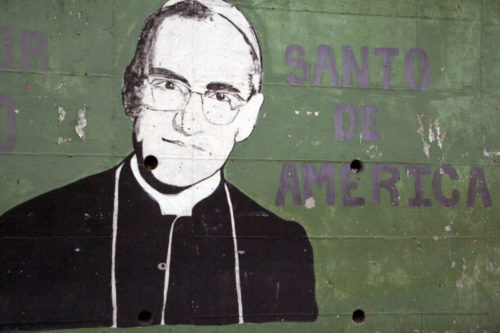 In this mural, on a wall in Mejicanos, a municipality adjacent to San Salvador, Oscar Romero is referred to as the “Saint of America.” For many Salvadorans, Romero was the “voice of the voiceless.” ENS Photo/Lynette Wilson

Roman Catholic Archbishop Oscar A. Romero was martyred on March 24, 1980, when a gunman shot him in the heart while he celebrated a funeral Mass in the chapel on the grounds of a cancer hospital where he lived. Though he is not an official saint in the Roman Catholic Church, many Salvadorans view him as the “Saint of the Americas” and his assassination as the tipping point toward war. Romero and the Martyrs of El Salvador were added to the Episcopal Church calendar of commemorations in 2009 (General Convention Resolution A095).

Throughout El Salvador’s civil war, and particularly in its aftermath, a culture of assistance and dependence has flourished in this, the smallest and most densely populated country in Central America, said Beecher, who is now retired and serves on Cristosal’s advisory board.

Rather than contribute to a system that it believes perpetuates dependence, Cristosal prefers to invest in processes that seek to balance societal inequities.

“El Salvador’s historical moment came with the signing of the 1992 Peace Accords, which opened the political process to all Salvadorans independent of their political ideology, race, gender, etc. But that was it,” said Noah F. Bullock, the executive director of Cristosal. “The peace accords didn’t address social and economic inequality,” he said. “They didn’t address many of the root causes of war. They simply said, ‘You can participate.’ So even though the peace accords offered political participation, the people entered a radically unequal political field.” 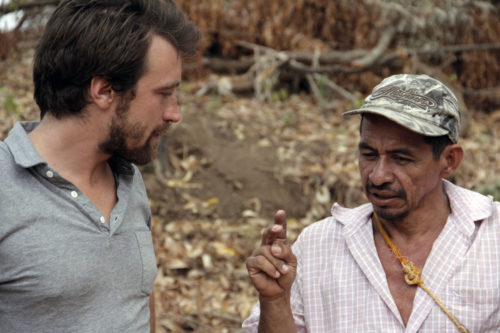 In its approach to community development, Cristosal seeks to further the process set in motion by the accords by helping to empower El Salvador’s poor to act for justice and development as equal citizens in a democratic society. It promotes access to adequate housing, potable water, jobs and other economic opportunities, and the rule of law, which fall under the category of human rights often provided or promoted by governments in the developed world. 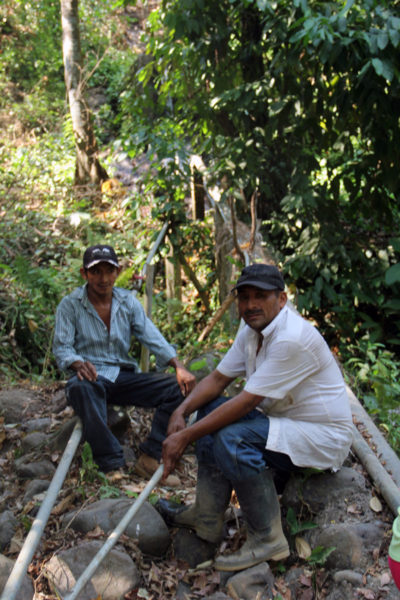 Community leaders in El Carmen sitting next to the water pipes that carry spring water up a 90-meter incline into the homes of 26 families in El Carmen. ENS Photo/Lynette Wilson

“Passing a [water] law won’t guarantee that the community has a functioning water system but it will be an important step toward establishing the right of citizens to clean water and the obligation on the state to preserve and protect water resources,” said Bullock, adding that the law is gaining support in the General Assembly.

Besides supporting the water association and the chicken farm, whose success depends on access to water, Cristosal is working with community leaders to pressure local authorities to repair the road leading to El Carmen, a road the municipality is mandated by law to build. During the approaching rainy season that lasts from May to June, the road can become impassible, another potential glitch in getting the chickens to market. If successful, the chicken farm will create a stable economic initiative, providing jobs in a community in a country where 50 percent of the economically active population is under or unemployed, and 48 percent of Salvadorans live in absolute poverty.

Before visiting El Carmen, the ecumenical group visited Los Calix, the second Bajo Lempa community that Cristosal serves, and participated in a five-hour Easter Vigil. In Los Calix, Cristosal is working with residents to build a mixed-use community center.

Visit the“El Salvador Journey” blog for a full roundup and photos of stops the group made in El Salvador.

Before arriving in El Salvador, the only other foreign country 14-year-old Christ Church member Kai Perschbacher had visited was Canada. His hometown of Anacortes sits midway between Seattle and Vancouver, British Columbia.

“It’s a culture shock,” he said. “You look at pictures of Third World countries in National Geographic, but you don’t understand until you drive down these roads in the back of a pickup and see that people are living in poverty.”

But, he added, you also see that it is possible to live with the bare necessities. 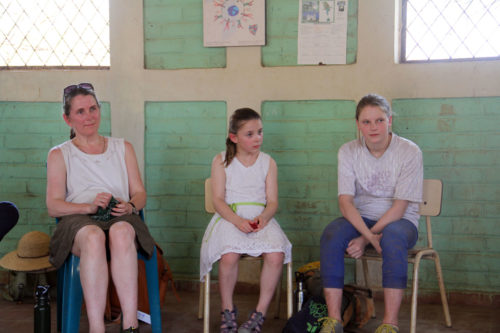 Sarah Hill and her daughters Grace and Zoe during a meeting with community members in El Carmen. ENS Photo/Lynette Wilson

Celebration Lutheran Church member Sarah Hill anticipated that the trip would help instill in her daughters Zoe, 14, and Grace, 11, the importance of knowing how to work, manners, tolerance and the need to take ownership and responsibility for their actions.

“When a family has means, it’s a challenge to raise a child that doesn’t feel entitled,” said Dr. Hill, a dentist. “That [entitlement] is incredibly prevalent in the United States.”

Zoe Hill said she didn’t know what to expect in El Salvador. El Carmen was really rural, and “it gives you a shock,” she said. It’s beautiful, like the United States, but in a different way, she said.

Getting off the plane, she worried that people wouldn’t accept her and would put her “in a box,” but that didn’t happen, she said. “Everyone has been welcoming.”

Fifteen-year-old Will Sladich’s reflection on the poverty he’d witnessed in the Bajo Lempa was more existential.

“It’s interesting that life goes on here whether we visit or not … all these people in these villages who we [Americans] would never know exist,” said Sladich, a member of Sacred Heart Church in La Conner, Washington.

— Lynette Wilson is an editor and reporter for Episcopal News Service. She currently is based in San Salvador, El Salvador.