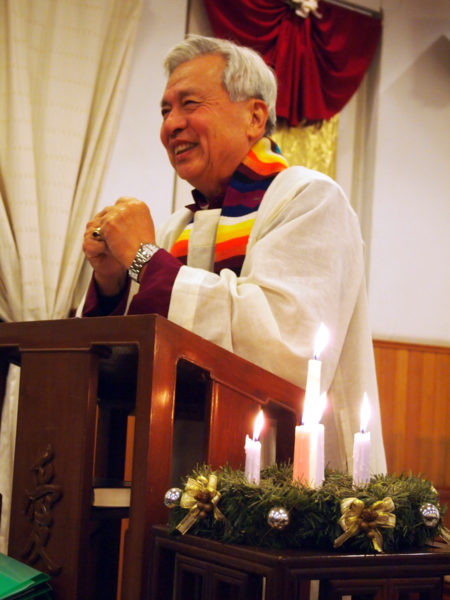 [Episcopal Diocese of Taiwan] The Rt. Rev. John C. T. Chien, the first native bishop of Taiwan, died on March 5 following a short illness. He was 72.

Chien was ordained and consecrated as bishop on March 25, 1988, marking a new era in the indigenization of the Taiwan Episcopal Church.

Born into a modest farming family in Gou-Bei Village, Dalin, Chia-Yi, southern Taiwan on March 23, 1940, Chien’s first direct contact with the Christian Gospel came as an undergraduate economics student at Tunghai University, Taichung, where he attended English Bible studies led by the Rev. William A. Buell.

Chien was baptized at St. James’ Episcopal Church, Taichung, on Dec. 25, 1962 and confirmed on Jan. 20, 1963; followed a few years later (after military service) by the decision to respond to God’s calling and train at Tainan Theological Seminary. Such a major break with tradition initially disturbed his parents, because as the eldest of six children he was expected to become the main breadwinner of the family. His parents later came to support his decision, and during the following years virtually all of Chien’s family became Christians, even establishing a mission station in their Gou-Bei home with regular weekly services.

On March 29, 1967, Chien and his wife Grace H. N. Chiu were married and thus began a lifetime of service together, Grace fully supporting and encouraging her husband in ministry.

Grace, a music graduate and piano teacher, came from a devout Christian family and her father was a Presbyterian minister. On May 21, 1967, Chien was ordained deacon, followed by ordination as priest on Nov. 30, 1967.

Chien first served at St. Andrew’s Church, Cha-ting (1967-69), then Grace Church, Tainan (1969-73). Overseas study at Virginia Theological Seminary led to Chien being awarded a Master of Sacred Theology degree in 1974 (and later an honorary Doctor of Divinity degree in 1998).

Of the five previous bishops of Taiwan, the first two were American, and the following three from Hong Kong. All had worked hard to establish a strong foundation for the diocese, preparing it well to be handed onto local leadership. Also in the same year, 1988, the Diocese of Taiwan was upgraded from missionary diocese to full diocesan status. Yet the 1980s were also a time of rapid economic development and great political upheaval, with the ending of martial law in 1987 and the transition towards democracy.

Chien, sharing the background and values of the local people, is credited with being able to work across ethnic and political divisions, and help the church to focus more on its ministry of proclaiming the Gospel.

Under his leadership, Diocesan Constitutions and Canons were revised, committees were reorganized, debate was encouraged, and all were respected regardless of their opinion.

With Chien’s background in economics, diocesan finances became more organized and transparent, the diocesan kindergarten ministry was strengthened, and his concern for evangelism and outreach developed.

Chien also encouraged a new generation of students at the Episcopal institution, then known as St. John’s and St. Mary’s Institute of Technology (SJSMIT) in Taipei.

Chien supported a new program giving these students the chance to first serve in the church over a period of time, testing their call. Previously, clergy (including Chien himself) had been sent to Presbyterian seminaries, but the seminaries insisted on a five-year training program for college graduates such as those from SJSMIT, which was considered unnecessarily lengthy.

A major breakthrough came when he negotiated an agreement with Fu-Jen Catholic University in Taipei to allow future clergy to train on their three-year seminary program.

The need for Anglican theological training for laity and clergy led to the continued development of the Trinity Hall Training Program, originally started in 1984.

In 1997, Chien ordained the Rev. Elizabeth F. J. Wei, Taiwan’s first female priest. He also initiated an Ancestor Memorial Liturgy, and the translation and publication in Mandarin Chinese of an important series of books on Anglicanism.

Chien also faithfully served on the Board of Trustees of both Tunghai University and SJSMIT for many years.

He helped establish and also served as president of the National Council of Churches of Taiwan (NCCT), promoting ecumenical projects and cooperation in Taiwan and overseas. He was treasurer of the Council of Churches of East Asia (CCEA), promoted dialogue and exchange with the Anglican Church in Japan, Philippines, Hong Kong, Canada and the U.S., and twice attended the Lambeth Conference, 1988 and 1998.

Chien retired on June 30, 2001 and returned with Grace to his home village of Gou-Bei where he continued to serve, preaching, celebrating and encouraging clergy and church members throughout the diocese.

He is survived by Grace, three children and five grandchildren.