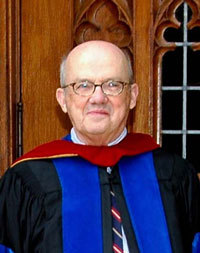 [Episcopal News Service] The Rev. Donald Smith Armentrout, retired professor of church history and historical theology, the Charles Quintard professor of dogmatic theology, and director of the Advanced Degrees Program at the University of the South’s School of Theology in Sewanee, Tennessee, died March 30.

The Liturgy of the Church in celebration of the Resurrection of Jesus and in memory of Armentrout will take place on April 3, at 3 p.m., in All Saints’ Chapel on the Sewanee campus.

Armentrout, who joined the School of Theology faculty in 1967, retired on Dec. 31, 2008, after 42 years as a teacher and leader at the school. He and wife Sue Ellen Gray Armentrout, who survives him, stayed in Sewanee in their retirement.

Armentrout graduated from Roanoke College in 1961; he was recognized as a Distinguished Alumnus in 1992 and received an honorary Doctor of Humane Letters degree from his alma mater in 2007. He earned a Master of Divinity degree from Lutheran Theological Seminary at Gettysburg, Pennsylvania, in 1964.

Armentrout became an instructor in ecclesiastical history at Sewanee’s School of Theology in 1967, progressing to assistant professor, associate professor, and professor before being named Quintard professor of dogmatic theology in 1991. He was the director of the joint Doctor of Ministry program shared with Vanderbilt from 1974 to 1984 and then director of the Advanced Degrees Program. He became associate dean of academic affairs in 1989, and served twice as interim dean of the seminary.

Armentrout exemplified the ecumenical movement, serving for 42 years as a Lutheran at a seminary preparing priests for the Episcopal Church, and becoming an eminent scholar in Episcopal Church history. His publications include The Quest for the Informed Priest: A History of the School of Theology (1979), A DuBose Reader: Selections from the Writings of William Porcher DuBose (1984), with Robert B. Slocum, Documents of Witness: A History of the Episcopal Church, 1782-1985 (1994), and also with Robert B. Slocum, An Episcopal Dictionary of the Church (1999).

The Very Rev. William S. Stafford, dean emeritus of the School of Theology, said at the time of Armentrout’s retirement that by his scholarly work and teaching Armentrout had “shined light upon the history of the Episcopal Church as well as the church catholic. As pastor and preacher, his faith in Jesus Christ crucified and risen has deepened the ministries of many hundreds of graduates of the School of Theology. He has been more than a pillar of the School; he has been a wall to hold us up, and a window to let light in. No substitute for Don will ever be found, but we are glad that Sewanee gets to keep him and Sue for the coming years in the flexibility and freedom that retirement promises. We thank Don for his service, and we thank God for Don.”