In Mike Bekis’ immediate family, for instance, 38 members have served or are currently serving in the U.S. Armed Forces.

“Just like my five uncles before us, they were all World War II [veterans], all of us have stepped up,” said Bekis, in a telephone call from Farmington, New Mexico, with ENS. “And we just followed in their footsteps.”

In May 2012, Bekis, who served in the U.S. Army from 1975-1980, began organizing a walk to honor and remember Vietnam veterans, like his brother Robert Bekis, who upon their return from service received nothing approaching a hospitable welcome.

“A lot of these Vietnam vets came home to nothing,” said Bekis. “They got spit on coming through the gates … rotten fruits and vegetables and balloons filled with animal blood thrown at them. No one gave a damn about them, they were drafted they did not ask to go there.” 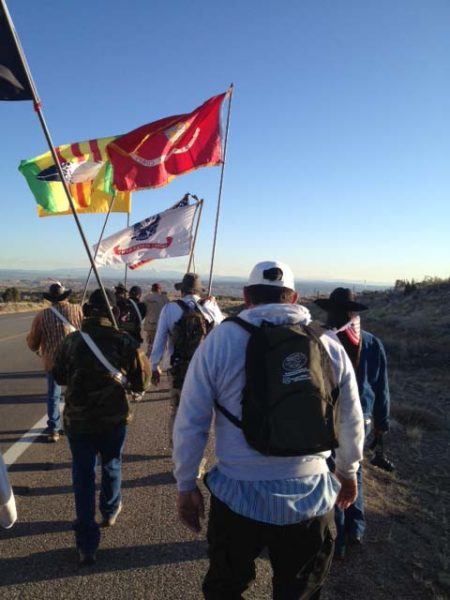 “Saturday, March 30th, I was honored and privileged to join the Navajo Vietnam veterans and walk with them for the last 12 miles of their 117 mile ‘Vietnam Veterans Welcome Home March,’” said Navajoland Bishop David Bailey in an e-mail to ENS. “It is important to our Episcopal Church in Navajoland as a response to our many Episcopal veterans who have proudly served in Vietnam, Iraq’s two wars and in Afghanistan and to their families.”

Many of the veterans suffer “post-war issues,” added Bailey, and in response the church has begun a ministry of recognition, which provides a time and place for veterans to meet and share with each other and their families.

“We identify resources to meet their specific needs and give them congregational support as they move toward healing,” he said.

March 29 marked the day the last of Vietnam troops returned home 40 years ago, and in 2012 President Barack Obama and New Mexico Governor Susana Martinez designated the last week of March as a time to honor Vietnam Veterans.

“This march during Holy Week is a journey for the Navajo Vietnam veterans; a pilgrimage toward healing. When the march was planned, we didn’t know it was going to be during Holy Week.  The dates just fell into it. I believe it happened for a reason, it is part of the mystery,” said Deacon Cornelia Eaton, who also serves as Bailey’s assistant. “The march is about acceptance; about being welcomed home. War is not a good thing. It is not to be praised, and unfortunately war does happen, and our warriors have to go off into it.”

“Our veterans have suffered deeply–stories of broken marriages, attempted suicides, alcohol and drug addictions, and the list goes on.”

Chapter houses, which are similar to town halls, and various veterans groups sponsored walkers, who in addition to veterans, included spouses and children of fallen soldiers who walked in their remembrance, said Eaton, “They have suffered too. This march is a start of reconciliation, forgiveness, and healing for veterans and their families.”

“Navajoland is responding to the needs of our warriors and families with love and compassion as we are called to offer hope to a broken world,” said Eaton. “The brokenness that our veterans face is a lifelong challenge.”

In 1978, the Episcopal Church carved out sections of the dioceses of Rio Grande, Arizona and Utah – areas within and surrounded by the 27,000-square-mile Navajo reservation – to create the Navajoland Area Mission. It was an effort toward unification of language, culture and families.

Between 125,000 and 150,000 Navajo live on the reservation, which is about the size of West Virginia, and a disproportionate number of Navajo have served in the U.S. Armed Forces.

According to the U.S. Census Bureau approximately four to seven percent of Navajo people living on reservation lands are veterans. Not unlike other veterans, the veterans of Navajoland suffer the effects of war and like all veterans these courageous patriots deserve our help and support as a way of offering thanks for their service to the nation, said the Rev. Wally A. Jensen, executive officer to the bishop for armed services and federal ministries based in Washington, D.C.

“Perhaps the most well-known of the Navajo people’s military service begins with the Code Talkers of World War II who used their Navajo language as a code which was never broken during the war,” said Jensen in an e-mail to ENS. “Military historians credit the Navajo Code Talkers with helping to win the war in the Pacific Theater. Recently the Navajo people have built a monument to honor the Navajo warriors who continued to serve in the military through World War I, World War II, Korea, Vietnam, Iraq and Afghanistan.”

The Rev. Patrick Finn, a U.S. Navy chaplain, represented Bishop Suffragan for the Armed Services and Federal Ministries James Magness during the celebration at the end of the march in Upper Fruitland.

“My particular interest is the healing that can take place when our current veterans from Iraq and Afghanistan have a safe place to share their story with veterans from the Vietnam War and other conflicts,” said Finn in an e-mail to ENS.  “I am beginning a project called ‘Until Every Story is Heard,’ which is encouraging religious and community based organizations to provide safe places for our veterans to share with other veterans.

“Even though there are several very good programs already, connections are not being made between our veterans and our local communities.”

Before being called up to active duty, Finn served from 1995-2002 as the rector of St. Luke’s Episcopal Church in Park City, Utah, and worked closely with the late Bishop Steven Plummer and his wife, Deacon Catherine Plummer, organizing mission trips and medical missions, he said.

“Being with the Diné (Navajo) provides an opportunity to see the impact on veterans who are isolated and far away from many resources,” he said. “I see this as part of my Baptismal Covenant, ‘Will you do all in your power to support these persons in their life in Christ?’”

Finn’s focus, he said, is to engage Episcopal churches in this much needed and valuable outreach to the one percent of the population that has served in the United States’ most recent conflicts.

“A yellow ribbon on bumper is great but doesn’t go much further than that,” said Finn, during a telephone interview with ENS. “People want to support veterans but don’t know how to.

In the case of Vietnam veterans, they have suffered for 30 and 40 years, and Finn is concerned, he said, that the same thing not happen to the men and women returning from Iraq and Afghanistan.

All four of Robert Bekis’ sons have gone into the military, serving in Iraq and Afghanistan, and none of them, their uncle Mike Bekis said, have felt comfortable with publicity upon their return home.

“When they came home they didn’t want nothing” he said. “They said, ‘We don’t need this publicity. We just want to come home to family and friends.’”

“I asked, ‘How come you don’t want it?’ And they said, ‘Look at my dad, he didn’t come home to that, we just want to follow in his footsteps.’”

The average age of a young man leaving the Navajo Nation for Vietnam was 17 years, and the military had 13 months to turn them into men before sending them to war.