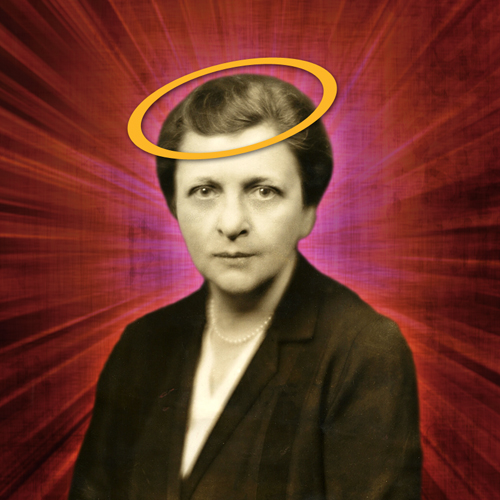 [Lent Madness – press release] While college basketball fans are in the midst of March Madness, Christians can now relax after a nail-biting finish to Lent Madness 2013. In the final match-up, former Secretary of Labor Frances Perkins worked her way past St. Luke to win the coveted Golden Halo.

Throughout the season of Lent thousands of voters have cast their ballots for their favorite saints through this engaging online devotional tool designed to help people learn about saints. There have been upsets and thrilling, come-from-behind victories as the field has been whittled down from 32 starters, to the Saintly Sixteen, the Elate Eight, the Faithful Four, and eventually the two finalists.

Frances Perkins became known as the architect of the New Deal while she served as Secretary of Labor in the Franklin D. Roosevelt administration. But she wasn’t merely a government bureaucrat. Perkins’ compassion came at least in part from her strong Christian faith. She was a regular worshiper in Episcopal churches and was added to the Episcopal Church calendar in 2009 for optional commemoration. She is the first American to win the Golden Halo. Previous winners were Mary Magdalene (2012), C. S. Lewis (2011), and George Herbert (2010).

Musing on this year’s winner, Lent Madness creator, the Rev. Tim Schenck, says “One of the fun things about Lent Madness is people learning about lesser known inspirational figures. In this case Frances Perkins captured the hearts and minds of the voting public and swept to an unlikely victory. I assure you no one who filled out a bracket had her going all the way!”

Frances Perkins had deep family roots in Maine. The Episcopal bishop of Maine, the Rt. Rev. Stephen Lane, said, “I’m delighted that Frances Perkins has won the Golden Halo. She is an icon for how baptized persons live out their ministry in the world.”

Mary Jo Curtis, director of media relations for Mt. Holyoke College, is rightfully proud. “Frances Perkins has been an inspiration to generations of Mount Holyoke women, and it’s been deeply gratifying to see the Lent Madness community learn of her and her life of good work – work that has shaped our country and helped so many. We are so pleased and proud to see her win the Golden Halo. We always knew she was an extraordinary and special woman, and now others know it, too.”

Lent Madness began in 2010 as the brainchild of Schenck, rector of St. John’s Church in Hingham, Massachusetts. In seeking a fun, engaging way for people to learn about the men and women comprising the church’s calendar of saints, Schenck came up with this unique Lenten devotion. Combining his love of sports with his passion for the lives of the saints, Lent Madness was born on his blog “Clergy Family Confidential.”

Starting in 2012, Schenck partnered with Forward Movement, a publisher and spiritual vitality catalyst in the Episcopal Church. The Rev. Scott Gunn, executive director of Forward Movement, said, “Nearly 100,000 people took part in Lent Madness this year, forming a massive online community in which we all learned a bit more about how God works in the lives of people struggling much as we do. Lent Madness is not only fun, but it teaches us there is hope for us, too.”