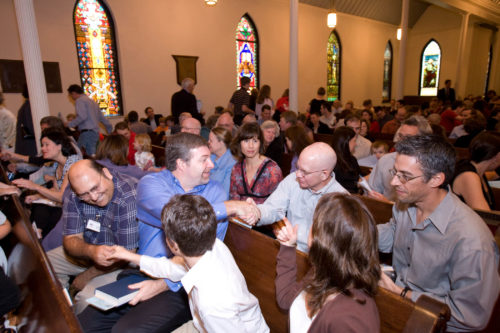 [Diolog] By now, most of the clergy and leaders in the Diocese of Texas have heard Mary Parmer’s story. After an invitation from a friend to attend a service at St. Stephen’s, Beaumont, Parmer left her evangelical background and fell in love with the Episcopal Church. For the past several years, she has toured the diocesan conference circuits, encouraging Episcopalians simply to invite their friends to church.

Now, in addition to other roles, Parmer has developed a newcomer-ministry training that has inspired new church growth. Using some creative thinking and common-sense practices, some churches across the Diocese of Texas have seen more than 100 new members in less than one year’s time during the newcomer-ministry pilot program.

“I think the Episcopal Church is the best-kept secret,” Parmer says, and she wants to let everyone know it is okay to expose the truth.

In 2011, the Newcomer Ministry Project began work with four congregations that would use Parmer’s new curriculum and strategies to test their effectiveness. St. David’s, Austin; Calvary, Richmond; and St. Francis’ and St. Martin’s in Houston each established a new staff position dedicated to newcomer ministry and implementing the strategies learned at Parmer’s training.

The results are remarkable.

“I can talk to a wall,” said Kathryn Adkins, St. Francis’ membership coordinator. “I’ve finally found a place for me to utilize that [gift].”

She attends all of St. Francis’ services and makes an effort to introduce herself to people she doesn’t recognize, even if they already are members. Then, she follows up with them with a phone call and connects them with other families in the church.

Parmer refers to this process as “invitation, welcome and connection.” Everything must start with a simple invitation to church. Then, the visitors must feel welcome when they arrive, without feeling bombarded. And finally, someone needs to get the visitors’ information and keep in touch, connecting their interests and needs with the ministries in the church.

According to Parmer, most church leaders believe their church is friendly. But, she said,  “Until you are intentional and systematic about welcoming and greeting visitors and then follow through, you won’t see these results.”

Though reading the training materials and following some guidelines are a good start to beginning a newcomer ministry, much of the information is not new or different. Something about attending the newcomer-training sessions seemed to spur a culture change and inspire a newfound creativity within many churches.

“It changed the excitement level,” said the Rev. Paul Wehner, Calvary’s rector. “Nobody comes into our church and isn’t greeted multiple times. The number-one reason people leave a church or don’t return to a church is because of the people that are there. It has little to do with how many ministries you have or how good the sermons are. It really has to do with how they are received and if they connect with the other people.”

At the end of January 2012, Calvary held a newcomer-ministry training attended by more than 50 members. The retreat focused on specific changes in practice and attitudes that the church could make.

“The reason for having the training is so that it is not the rector telling everyone what to do,” Wehner said. “There are some things about the church and worship that need to be changed, and that is easier to accept through a third party.”

Simple things like leaving aisle seats for visitors and setting aside parking spots are easy changes when everyone gets on board. But the real difference comes in attitude and purpose.

”The one thing that runs through all of this is relationship,” Parmer said. “It’s about being in a relationship with someone and making that first step to invite them to church. And then when they do come, it’s about treating them as if Christ walked through the doors. It is not easy. You have to be really intentional.”

Soon, Forward Movement will be licensing the Newcomer Ministry training materials for purchase throughout the country, but they will still be available at no cost in the Diocese of Texas here.

This article first appeared in the March issue of the Episcopal Diocese of Texas magazine Diolog.