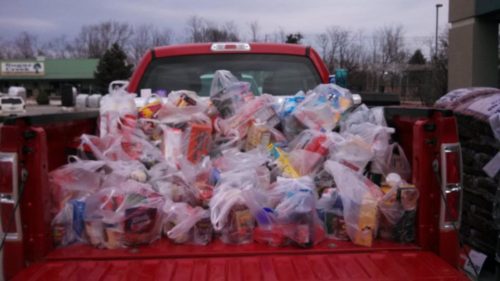 [Episcopal Diocese of Missouri] For the members of Trinity Episcopal Church, Kirksville, Missouri, the impending arrival of Winter Storm Virgil brought a blizzard of blessings.

One of Trinity-Kirksville’s most longstanding outreach ministries has been contributing to the local Christian Community Food Depot. Despite the illusion of abundance of food in America’s heartland, 17.1 percent of people in Adair County are food insecure, and 55 percent live at 130 percent or less of federal Supplemental Nutrition Assistance Program poverty levels, according to Map the Meal Gap statistics. Additionally, according to the Annie E. Casey Center, 42.5 percent of schoolchildren in Adair County qualify for free or reduced school lunches. One neighboring county has a rate of 67.8 percent.

“There’s tremendous need here,” said Trinity’s vicar, the Rev. Johnnette Shane. “The need also tends to be invisible because, for many people, it’s still considered shameful to ask for help. So it is wonderful that the people of Kirksville were so generous.”

Last August, Trinity held a “Fill the Ford F-150 Food Drive” at a local grocery store, and parishioners were amazed to received donations of more than two pickup-truckloads of food. They did not expect as much generosity with the looming threat of snow and 35-degree temperatures on March 23.

“As people made their own purchases to prepare for an impending storm, it was heavily gratifying that the community made such a grand gesture of support for Adair County’s hungry,” said Trinity Bishop’s Warden Kevin Minch.

For the dozen or so Trinity parishioners who volunteered at the event, it was a continuous opportunity to meet and greet the givers. It was not unusual for donors to admit they had been recipients of the local food bank in times past. Some donors placed more food in the truck than they took back to their cars. One woman walked from her house to the drop-off point five times to bring canned goods to the food drive.

But perhaps the most amazing incident came from an elderly couple who, the previous day, had sold their family farm to move into town. Parishioner Arla Snow had met the husband of the pair earlier in the day at the store. Later, they returned and motioned for her to come closer.

“Here,” they said, pressing an envelope into her hands. “Wait until we drive away, and give this to your priest. When we were a young married couple, we were so poor we held onto the nails of the bedpost and prayed that God would simply help us through to the next day. We want you to have this.”

Snow delivered the envelope, marked “to Trinity Episcopal Church, for your Fill the Ford F-150 Food Drive.” Inside was an anonymous note … and $500.

“God did bless us in the chance to facilitate that wonderful couple to give so much,” said Shane. “They had tears in their eyes as they gave, and we had tears in our eyes as we received.”