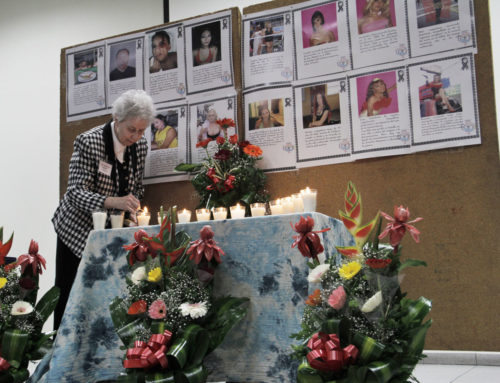 [Episcopal News Service – San Salvador, El Salvador] In 2007, while working in the library and studying psychology at the University of Central America here in San Salvador, Cruz Torres discovered the Episcopal Church.

He was cataloguing “The Anglican Review,” a prospectus from the Anglican Church in Guatemala. As he read it and later researched the Episcopal Church, he learned about the 2003 election of New Hampshire Bishop Gene Robinson, the first openly gay priest elected bishop, and the church’s openness to LGBT people.

“And I wondered if there was an Anglican church here,” he said during a recent interview with ENS.

“I told him, ‘Well, Father, I don’t want to lie. I want to tell you the truth. I’m Roman Catholic. I’ve read about LGBT rights in the Episcopal Church. I am gay. I am a Christian, and I want to live my spiritual life in a place that doesn’t damn me,’” said Torres, during the interview at San Juan Evangelista.

Serrano responded: “Our doors are open.”

It was November 2007. Not long after Torres arrived, a male couple found the church. And then came another gay man and another, and eventually the number grew to six. Bishop of El Salvador Martin Barahona suggested that the group help the diocese begin a ministry on sexual diversity, but the group declined, Torres said. “We said, ‘No, El Salvador isn’t ready.’”

Two years later, the group was meeting regularly on Saturday afternoons and had doubled in size.

“We were 12, and we started to talk about our experiences in the [other] churches, and we said maybe it was time to call and invite the people we know,” Torres said. “Half of the people who came wanted to change [their sexual orientation] but that wasn’t our vision or our mission.”

The Anglican/Episcopal Church of El Salvador is one of five churches in La Iglesia Anglicana de la Region Central de America, which also includes Costa Rica, Nicaragua, Panama and Guatemala, that have formed a covenant with the Episcopal Church. El Salvador’s diversity ministry is the only one of its kind in the region’s Episcopal churches, said Torres.

(Two other full-inclusion ministries exist in El Salvador, one in the Metropolitan Community Church and the other in a Protestant evangelical church.)

That is not to say the situation for LGBT people is particularly different in El Salvador. Conservative sectors, including in the church and the media, call homosexuality bad and a sin, and the families of LGBT people are made to believe that, which affects how they sometimes treat their sons and daughters, said Torres.

“Their families believe that because of what they are told by fanatics,” he said. LGBT people must demonstrate to family members how they’d like to be treated, he added. “That is the principal thing we do here [in the ministry]; people need to be fine with themselves.”

The group’s mission was not to make gay people straight, as is the mission of some churches, but rather to help members work through their feelings, Torres explained. “We said: ‘God loves you as you are. If you are gay, it is because of His will, and you have a mission in life.’”

Since forming the Ministerio de Diversidad Sexual in 2009, a diocesewide ministry, the group has grown to between 25 and 30 people – Roman Catholics, Methodists, Mormons, Evangelicals — many of whom have been received into the church. But evangelizing, Torres pointed out, isn’t the group’s mission either.

Despite advances in human rights, LGBT Salvadorans and those across the region often face discrimination and violence, topics recently addressed during the first-ever conference for LGBT human rights in El Salvador, held March 14-15 at the University of Central America.

“This is the first time this has happened in El Salvador, a place where to be openly gay, lesbian or transgendered could get you killed,” said Olivia Amadon. She attended the conference as a representative of Foundation Cristosal, a faith-based human rights and community-development organization that has its beginnings in the Episcopal and Anglican churches. “So it’s very inspiring to see organizations that support LGBT rights come together and put a face on the issues.”

The conference included speakers, panels and discussions addressing:  what it means to be LGBT in El Salvador; community empowerment through the political process; inclusive faith communities as promoters of human rights; using international law to combat impunity; and access to justice as a human right.

(In the last few years, the United Nations has begun to frame LGBT rights as basic human rights.)

Speakers and panelists, Amadon said, talked of LGBT rights as human rights that should be protected, but the question remains: “Where does the conversation go from here?”

The government of El Salvador’s executive branch has passed a decree banning discrimination based on sexual identity in the public sector, but that decree doesn’t extend to the private sector and can easily be overturned, and the laws protecting women and children from violence don’t extend to LGBT people, said Amadon.

Even though the police are already receiving sensitivity trainings, transgender women continue to be beaten in the streets, said Amadon. “The law won’t solve discrimination, but there would be less impunity when violations do happen.”

Passing a law is one step; the next is promoting awareness so homophobia and systemic discrimination decline, she said.

It is a hate that has been around for generations, said Salvador Ramos, 22, in an interview at the conference.

“It’s about changing the psychology of the masses,” said Nestor Urquilla, 41, adding that at most there are 3,000 Episcopalians in El Salvador (the total population is 6 million).

Besides being the first conference on LGBT rights in El Salvador, the March gathering was significant in making clear a situation that needs to be changed, Torres said. That change cannot come from government, but through the grassroots efforts of society, he added.

In general, straight members of the Episcopal Church in El Salvador have been supportive of the group, but that doesn’t mean there hasn’t been resistance, said Wendy Castillo, 28, a member of the diversity group.

“It hasn’t all been rose-colored,” she said, adding that there is still work to be done.

When Torres and the others from the LGBT community first began attending services at San Juan Evangelista, the parish was open to their presence, but two or three families left, said Serrano.

Torres, now 30, first revealed his sexual identity during confession with a Roman Catholic priest when he was 18. Even though the priest didn’t reject him, he said, he didn’t feel welcome in the church and was without a spiritual home from 2005 to 2007, when he found the Episcopal Church.

“It’s God’s will that I am here,” Torres said. “I accept myself and am happy with me, since I found that last piece of my heart.”

“I was happy being gay, but there was this last thing in my heart,” Torres concluded. “When I came here I could be me, being Christian and being gay.”

— Lynette Wilson is an editor and reporter for Episcopal News Service. She is currently based in San Salvador, El Salvador.