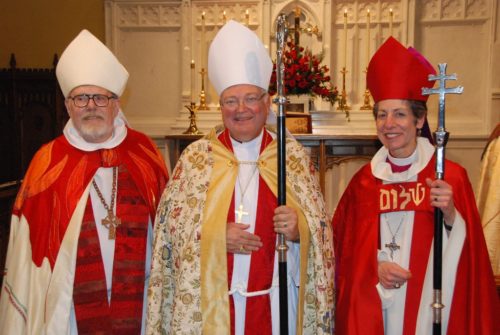 Presiding Bishop Katharine Jefferts Schori was chief consecrator and the official co-consecrators were bishops Gregory Brewer of Central Florida and Russell Jacobus of Fond du Lac. The preacher was the Rev. Canon Ernie Bennett, canon to the ordinary in the Diocese of Central Florida.

Lambert succeeds the Rt. Rev. Keith Whitmore, who resigned as Eau Claire’s bishop in 2008 to become assistant bishop of the Episcopal Diocese of Atlanta. The diocese has been led since September 2010 by Bishop Provisional Edwin Leidel, Jr, former bishop of Eastern Michigan. Eau Claire’s Standing Committee served as the ecclesiastical authority during the period the diocese was without a bishop.

Under Leidel direction, Lambert was elected as sixth bishop on Nov. 10, 2012.

About 300 people attended the March 16 ordination, including 10 Episcopal bishops and the Rev. Duane C. Pederson, bishop of the Northwest Synod of Wisconsin for the Evangelical Lutheran Church in America.

Lambert was vested by his family: wife May Ruth; daughter Madeline (and fiancé Dave Swanson); daughter Lydia (and fiancé Jon Feldbruegge); and son Will. Many of Lambert’s extended family acted as presenters and oblation bearers.

The Eucharist was distributed by Lambert and other diocesan leaders, with eucharistic vessels collected from throughout the diocese for the service, symbolizing their shared ministry.

Lambert’s cope was designed by Mary Schultz of Exodus39 Vestments, and includes a ‘Cross and Crown’ embroidered on the hood. Lambert chose the emblem as a symbol of his episcopate after seeing the same engraved on a High Altar in the diocese.

The Diocese of Eau Claire includes 20 parishes and about 2200 members throughout northwestern Wisconsin.

Lambert acknowledged his responsibility for the deployment and “the nurturing of those congregations. My main job is to build up each of these congregations and hopefully form new ones.”

Lambert had been the rector of St. James Episcopal Church in Leesburg, Florida, since 2007.  He holds degrees in history and public affairs as well as a Master of Divinity from Nashotah House Theological Seminary. He was ordained priest in May 1982 and served as a U.S. Navy chaplain for 22 years.

Earlier in the week, the presiding bishop met with leaders of the Faith Partners for Literacy Program, a group dedicated to building ecumenical relations in support of family literacy and adult education programs in the area.