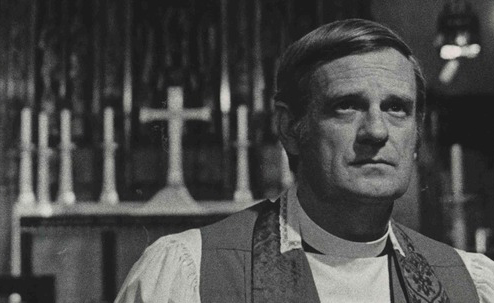 He died March 14, after a protracted illness at St. Joseph Mercy Hospital in Pontiac. The bishop was surrounded by loved ones, keeping vigil by his side, throughout his final days. His peaceful transition was made while his daughter, Cary, was reading spiritual imperatives to him

He is survived by his wife of 67 years, June, their daughters, Lesley and Cary; sons Alexander, C. Harry and Donald; and four grandchildren.

Visitation will begin at noon on March 23 at the Cathedral Church of St. Paul in Detroit, with a requiem Eucharist at 2:00 p.m.

Coleman McGehee was born in Richmond, Virginia and came to the ordained ministry via engineering, military service and the practice of law. He was at one time deputy attorney general of the Commonwealth of Virginia.

An avid golfer, McGehee was swimming laps three times a week and taking other exercise as he had for years until the onset of his final illness in mid-February. He had stopped functioning publicly after the onset of dementia several years ago.

After service during World War II as a 2nd lieutenant in the U.S. Army Corps of Engineers, he graduated from Virginia Polytechnic Institute in 1947. He earned a law degree at the University of Richmond in 1949. Eight years later he entered the Protestant Episcopal Theological Seminary of Virginia, graduating in 1957. Prior to coming to Michigan he was rector of Immanuel-on-the-Hill Episcopal Church in Alexandria, Va., from 1960 to 1971 where he was the pastor to the late President Gerald R. Ford and Betty Ford.

Coleman was elected a bishop in May 1971 and took up his new duties in Michigan October of that year. Then 48, he succeeded the Rt. Rev. Richard S. Emrich who had led the Michigan diocese since 1948.

His convictions about justice and peace matched his concern that not only the church but society, too, should respect the dignity of every human being.

McGehee supported union labor. He offered a liturgy for peace on many a Good Friday at the gates of Williams International in Walled Lake where missiles were then made. He supported the cause of women clergy and in 1977 ordained the first woman priest in the Diocese of Michigan. He welcomed gay and lesbian members into the church and was not hesitant to ordain them.

He was one of the founders, with Roman Catholic Bishop Thomas Gumbleton and the late Rabbi Richard Hertz, of the Michigan Coalition for Human Rights.

The bishop’s conscience led him to support the locked-out Detroit Free Press and Detroit News employees in 1995. Already 72 and retired for five years, he stood with them on the picket line, spoke for them and was willing to go to jail with them.

McGehee was a spiritual leader, friend and advocate in the diocese and throughout the church.  His legacy will not be forgotten.