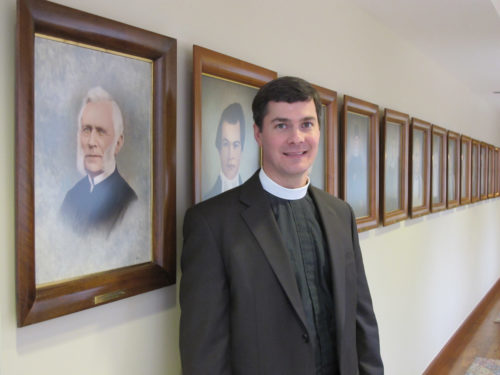 The Very Rev. Barkley Thompson poses with portraits of the deans and rectors that preceded him at Christ Church Cathedral in the Episcopal Diocese of Texas. Photo/Luke Blount

[Episcopal Diocese of Texas] Christ Church Cathedral was founded in 1839 when Houston was the capital of the Republic of Texas. It was the first religious congregation in the city and is the only one still located on its original site. Among the founding members were the republic’s attorney general, the secretaries of treasury, state and navy, and the Texas ministers to the United States and Mexico.

Christ Church became the cathedral for the Diocese of Texas in 1949 during the centennial celebration of the diocese, and it serves as a place of hospitality and worship for all Episcopalians in the diocese. Six rectors of Christ Church have been elected bishop, including John Hines, who became presiding bishop of the Episcopal Church. The Very Rev. Barkley S. Thompson began his new ministry as the eighth dean of the cathedral on Feb. 7.

Carol E. Barnwell: Who was the faith bearer in your family and how did you learn and experience your faith growing up?

Barkley Thompson: I was blessed to be raised in an ethos of faith. My family were members of First United Methodist Church in Paragould, Arkansas, and as a child and youth I was at the church every time the door opened for church services, youth group, potluck suppers, etc. (I owe most of my knowledge of biblical content to Methodist Sunday school.)

Both of my grandmothers were major faith bearers for me. My paternal grandmother potently believed in angels. My maternal grandmother began a Christmas Day family tradition when I was a small child in which our family acted out the nativity pageant. Everyone had to participate. We would dress in old bedsheets and scraps of towels and drapes to play the parts of the Holy Family, the innkeeper, the shepherds and the Wise Men. Almost 40 years later that tradition endures in my family.

CEB: How did you come to a deeper faith and choose a call to ordained ministry? What were the circumstances surrounding your decision?

BT: I have felt a sense of God’s calling since adolescence. I recall a moment when I was 12 or 13, standing in the darkened and empty sanctuary of First United Methodist Church in Paragould, when I uttered to God aloud that I was his. Obviously, I didn’t know at the time exactly what that meant or how it would play out, but I was earnest, and my sentiment was true. I became an Episcopalian in college (which was a return to the mother church, as my father had been raised Episcopalian), and the first person with whom I spoke about a calling to the priesthood was the Rev. Sam Portaro, who was then the Episcopal chaplain at the University of Chicago, where I was in graduate school. Sam was a great encourager, and I will be forever grateful to him.

CEB: Where have you previously served, and what specific lessons do you bring from those experiences?

BT: The first congregation I served as vicar and then rector was Holy Apostles, a restart parish in Memphis. Over several years the congregation had dwindled to 40 members, and when I graduated from seminary the bishop assigned me to move the remnant of the parish to the edge of suburban growth, which was lacking an Episcopal presence. We worshiped in the chapel of St. George’s High School, while the congregation grew to over 400 members. We eventually bought land and built a church campus. Holy Apostles is now served by my good friend, the Rev. John Leach, and the parish continues to thrive.

I have just completed a five-and-a-half year tenure as rector of St. John’s Episcopal Church in Roanoke, Virginia. St. John’s is a 150-year-old, resource-size, downtown congregation in a slow-growth city. In five-plus years, we pursued innovative-yet-still-traditional forms of worship, new programs for Christian formation, outreach initiatives and enhanced Christian community.

Having served in two such different environments, I have come to believe the Episcopal Church can thrive in any context. I am also convinced that the world hungers for both our sacramental and liturgical tradition and our theology of hospitality and grace.

Spiritually, my experience serving parishes has reminded me again and again that it’s crucial for the priest to pray. This may seem self-evident, but in the crush of activity at a large parish, it’s all too easy for prayer to be the thing that’s nudged off of the priest’s daily agenda. It can’t be allowed to happen. Only by regularly centering oneself in God can the priest – rector or dean – shepherd the congregation toward that same center.

Practically, I am reminded again and again in my vocation that we never know the inner struggles of those we meet. The parishioner whose life seems the most together is often the one barely hanging on to faith. Approaching fellow Christians with a discerning ear and an open heart can, quite literally, be the difference between life and death. The smallest occasion of grace can be life-changing to one in need.

CEB: I know you have roots at the cathedral. In what way is that connection reflected in your decision to accept a call as dean here?

BT: My family traces to several of the “Old Three Hundred” who moved to Texas from the United States with Stephen F. Austin in the 1820s. My great-grandfather moved from Bellville, Texas, to Houston as a young professional, and my grandfather was raised at Christ Church Cathedral. I grew up hearing stories of ancestors who settled the land, made Texas home and fought for Texas independence. When I was a seminarian at the Seminary of the Southwest (http://www.ssw.edu/) in Austin, I was able to connect with my Texas roots. My parents made numerous visits to Austin, and we took day trips to Fayette County (from which most of my Texas ancestors hail), College Station (where my dad went to college) and other areas. The sense of calling to Christ Church Cathedral is not due to my family’s history, but added to all of the other signs that God is wedding the cathedral and me in shared ministry. My Texas roots make this move feel like a homecoming of sorts.

CEB: Houston is an incredibly diverse city, ethnically and culturally. How will you meet the challenge of becoming a more diverse congregation?

BT: Most importantly, the future shape of the cathedral congregation must result from a shared vision developed prayerfully over time, in close consultation with lay leadership and with broad input from the cathedral community. For that to take place, the cathedral and the dean must first have the opportunity to build trust in one another. Growth of any kind – in diversity, numbers, programs, etc. – necessarily involves change. Only through a careful, faithful and deliberate process will the dean and cathedral be able to pursue any sort of initiative with anticipation, hope and joy.

That said, I can offer a few general thoughts on increasing congregational diversity. Cultural diversity can refer to nationality and ethnicity but also to generational differences and different socio-economic strata. Part of the reason mainline Christianity has so often failed to increase diversity is that churches tend to decide in a vacuum what non-represented, prospective parishioners want or need and then expect non-Episcopalian or unchurched people to embrace what we offer. The key is first to listen to the spoken hopes and needs of, for instance, the people who’ve recently made downtown Houston their home and who might be seeking a spiritual community. Only then can the cathedral know how best to respond in a way that will welcome newcomers to our midst.

CEB: How do you envision the cathedral’s life in downtown Houston, in the Diocese of Texas?

BT: I’ll reiterate here what I said above: Any specific vision for the cathedral’s role in downtown Houston and in the Diocese of Texas must be a shared vision developed prayerfully over time by the dean, the cathedral community and (with regard to the diocese) the bishop. With that in mind, I can offer some fairly general thoughts about my understanding of urban, downtown ministry and the cathedral’s role as the diocese’s central church.

In Roanoke, St. John’s (where I most recently served) sits equidistant between the Wells Fargo Tower and Roanoke Memorial Hospital (a level 1 trauma center), which means that the parish exists in the very heart of the commercial, banking, governmental and health-care center of southwestern Virginia. When I would hear the bells of St. John’s ring each hour, they served as a reminder that God resides, not only in Sunday worship, but also in the midst of each of these parts of our collective lives. God has something to say about how we do business, how we treat our citizens and how we care for those who are hurting. God lays claim to all of us, and, because the incarnate God abides among us, all of life is holy. Urban, downtown parishes like Christ Church Cathedral bear the responsibility for reminding the city of this truth, and that responsibility is a challenge, an opportunity and a privilege.

Because of its central role and location, the cathedral also can serve in Houston as an iconic alternative to other forms of Christianity that are insular and often focus on individualistic, material well-being rather than the redemption of the whole community as the body of Christ. We can be a place of spiritual welcome and refuge to all who walk through our doors seeking to know the love of God more deeply.

Additionally, I hope the cathedral increasingly will serve as a center of formation, worship and cohesive identity for all Episcopalians in the Diocese of Texas, and I look forward to partnering with Bishop [C. Andrew] Doyle in developing ideas for how this might be so. In the Episcopal Church, we are fond of saying that the basic component of the church is the diocese rather than the parish, and in that sense the cathedral belongs to all Episcopalians in the diocese. (Dean [Joe] Reynolds took good care to emphasize this.)

CEB: How and where did you meet your wife? How is your life together reflected in your ministry?

BT: Jill and I met at Hendrix College, a fantastic liberal arts school outside of Little Rock, [Arkansas]. We lived a few doors from one another in the college apartments. Jill is a cradle Episcopalian from Trinity Cathedral in Little Rock, and since I had recently moved from the Methodist to the Episcopal Church myself, it was easy to fall in love with an Episcopalian!

On the one hand, Jill is my touchstone, my counselor and my best friend. She enables me to be a faithful priest. On the other hand, Jill has engaged in the ministry of the church in her own areas of passion and interest. In recent years, she has helped with children’s ministry, and last year she co-led St. John’s-Roanoke’s “Club 45,” which is a pre-youth group for fourth- and fifth-graders. In her professional life, Jill is a physical therapist. That and motherhood are her vocations.

Carol E. Barnwell is communications director for the Episcopal Diocese of Texas. This interview first appeared in the March issue of the diocesan publication Diolog.