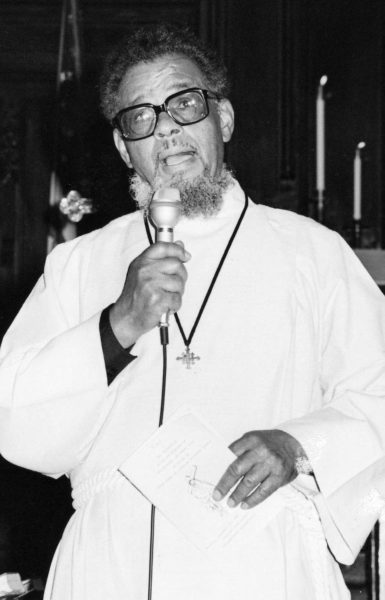 [Diocese of Atlanta] The Rev. Van S. Bird of Atlanta, an Episcopal priest for 61 years, died March 6 at age 88. His funeral was March 13 at the Cathedral of St. Philip, Atlanta, with Bishop Robert C. Wright presiding and preaching.  “Van channeled an incredible intellect through his heart,” Wright said in his homily.

The Rev. Bird was born and grew up in Waycross, Ga., was graduated from Fort Valley State College in Fort Valley, Ga., and earned a master of divinity from Seabury-Western Theological Seminary, Evanston, Ill. He was ordained a priest in 1951 at historic Episcopal Church of St. Thomas in Philadelphia, where he served as curate.

With his wife, Eva, he organized a Holy Trinity Episcopal Church in Baltimore, Md., which grew during the civil rights era to a 400-member parish.  After studying in England for two years, he was called to serve as vicar of St. Andrew’s Church in St. Thomas, Virgin Islands.  In 1968, he returned to Philadelphia where he served as rector of two parishes, St. Bartholomew’s and St. Simon the Cyrenian. From 1975 to 1984 he also led the Episcopal Diocese of Philadelphia’s Office of Social Concerns and Church and Community Relationships.

During these years he earned a Ph.D. in sociology from Temple University and then served as assistant professor of sociology for 20 years at LaSalle University in Philadelphia. Dr. Bird retired from LaSalle and in 1994 returned to Georgia, settling in Atlanta, where he taught in the Sociology Department at Morehouse College, served as a priest associate at St. Paul’s Episcopal Church, Atlanta, and as an interim and supply priest for the diocese.

His survivors include his wife for 66 years, Eva Brown Bird of Atlanta, along with three children, eight grandchildren and nine great-grandchildren.