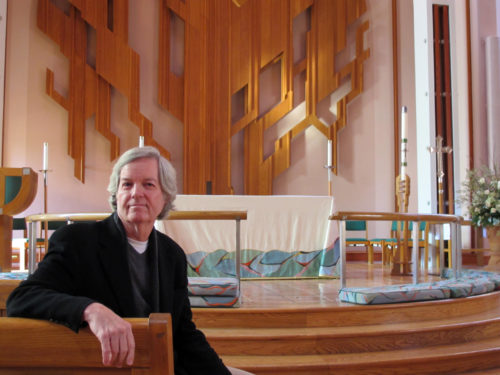 Classic style with contemporary elegance is the perfect combination to satisfy the challenges of creating inspirational vestments for the modern church, Cliff Chally says. Each project is designed specifically for the setting where it is to be used or for the individual for whom it is intended. Photo/Diocese of Texas

[Diolog] When Emmy-nominated costume designer Cliff Chally offered to make a replacement set of vestments at his church in Los Angeles, he wasn’t planning a new career. But that’s exactly what happened. Today, bishops from San Diego to Jerusalem wear his custom-designed robes, and altars are adorned with paraments that reflect their particular context and history.

Each set he designs is completely unique and appropriate for its setting, “to create a visual harmony,” Chally says. “Traditional spaces and individual taste may require a more traditional approach. Sometimes the designs are meant to echo a stained-glass treatment, but in a way that’s just enough, it’s very edited. Like costume design, if they notice the clothes, then you are in the way.”

Chally originally wanted to study in Paris but, after leaving the service, learned he couldn’t use his GI Bill there, so he headed to design school in Los Angeles. The curriculum partnered students with professionals in the entertainment business, and it wasn’t long before Chally had established a name for himself. His first job was the inaugural show at the MGM Grand in Las Vegas. From there, he joined the staff at CBS and worked on the Carol Burnett and Tony Orlando variety shows doing men’s wardrobes before going to work for Aaron Spelling at Columbia Pictures. Then he designed a season for Hal Linden’s Blacke’s Magic on NBC in 1986.

While Linden’s series didn’t last, Chally earned a number of Emmy nominations working on costumes for Designing Women (1986-1993). The sitcom’s creator, Linda Bloodworth-Thomason, was a close friend of Bill and Hillary Clinton, and it wasn’t long before Chally put his experience in men’s wardrobe to work dressing the future president for his initial debates.

“I spent the next several years flying between Washington and LA,” making sure both Clintons were ready for prime time, he remembers. “It was quite an experience.” 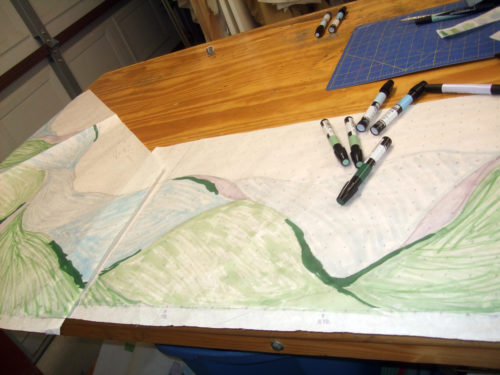 Every spring all of Cliff Chally’s workrooms are full of “red-carpet gowns” being altered for Hollywood’s glitterati headed to the Gold Globes, SAG and Academy Awards. But the rest of the year, work continues on altar hangings and exquisitely designed and rendered vestments. Photo/Diocese of Texas

Chally is an active member of St. James’ in the City Episcopal Church in the Diocese of Los Angeles, where he serves as verger. Although raised in the Church of Christ, Chally first experienced Episcopal worship during his childhood in Texas when a fellow third-grader invited him to Sunday school. He still remembers the profound response he had to the choir and the music, the stained glass and incense. Decades later, when another friend invited him to go St. James’, he finally was able to choose the way in which he wanted to worship. “I’ve been there ever since that first Sunday,” he says.

Chally served as president of the Costume Designers Guild and was on the Board of Governors of the Academy of Television Arts and Sciences. His credits are long and include movies and television. In every instance, his design work was focused on context. Chally’s vestments show the same discernment and respect for detail. He wants his liturgical pieces to enhance the worship experience, “not distract from it.”

When designing for clergy, some unique design element always distinguishes the vestments. Mitres and copes for the Diocese of Los Angeles bear the Hands in Healing cross designed for Bishop J. Jon Bruno by Laura Smith as a symbol of his ministry. Colors of the sunrise were airbrushed into the hems of all the pieces he created for the Diocese of Arizona, and an aqua lining represents the water of baptism while providing a symbolic contrast to the fiery sunrise.

Special vestments for a Korean and an African commemoration service included Korean damask with Korean symbols woven into it and special Kente cloth used in otherwise very traditional chasubles. Chally is very clear that the design should not distract people from the worship experience.

On one set of hangings, embroidered grapes have a remarkable texture because the thread on each grape is sewn in a different direction. For several years, Chally sent pieces to India to be hand-embroidered, but after long delays and unsatisfactory results, he turned to the people with whom he has worked in costuming for many years.

“I took the embroiderer my sketch and the fabric. He digitized the drawing, put the fabric in the machine and pushed the button, and there was my sketch! I thought, ‘What have I been waiting for?’” Chally says, laughing.

Most of his seamstresses are from Eastern Europe or South America. The first time they worked on a set of vestments, Chally noticed a profound change come over the workroom.

“They were used to making pieces that are meant to be discarded because they get dirty or have bullet holes. But these vestments are made to last and will be blessed and cared for,” he explains. “There came this quiet I can’t explain, a peace that changed the whole atmosphere because of the great pride that went into the work. It was a great surprise to me. I wasn’t expecting it.”

Chally found a spiritual home in the Episcopal Church, and that has led to the expansion of his giftedness and the replication of the initial awe and wonder he experienced in worship years ago wherever his work appears.

“What really appealed to me [about the Episcopal Church] at first was the extraneous stuff, the way worship was elevated and the way everyone brings his or her best to the glory of God,” he says. “But the longer I’m involved, I think it’s that the tent is big enough for everyone.”

For photos and a story about Chally’s Costume Co-op, visit here.

This article first appeared in the March issue of the Episcopal Diocese of Texas publication Diolog.