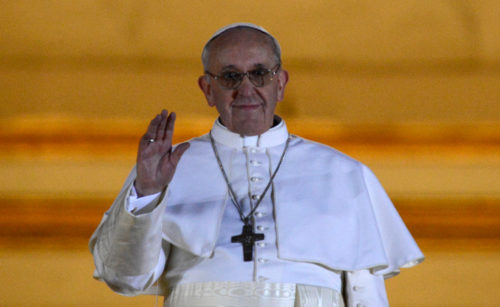 Newly elected Pope Francis, Cardinal Jorge Mario Bergoglio of Argentina, appears on the balcony of St. Peter’s Basilica after being elected by the conclave of cardinals, at the Vatican, March 13, 2013. White smoke rose from the Sistine Chapel chimney and the bells of St. Peter’s Basilica rang out on Wednesday, signaling that Roman Catholic cardinals had elected a pope to succeed Benedict XVI. Photo: Reuters/Dylan Martinez

Bergoglio, the first Jesuit and the first cardinal from Latin America ever to be elected pope, chose the name Francis.

Presiding Bishop Katharine Jefferts Schori said in a statement that the Episcopal Church “will pray for the new Bishop of Rome, Pope Francis I, and for the possibility of constructive dialogue and cooperation between our churches.”

Archbishop of Canterbury Justin Welby also issued a statement. “We wish Pope Francis every blessing in the enormous responsibilities that he has assumed on behalf of Roman Catholics around the world,” he said, calling the new pontiff “a compassionate pastor of real stature who has served the poor in Latin America, and whose simplicity and holiness of life is remarkable.”

While many observers assumed that Bergoglio took the name Francis in a signal he hopes to emulate the humility of the man who founded the Franciscan order, a man named Francis was significant in the early days of the Jesuits. Francis Xavier, one of the first seven Jesuits, was a student of Ignatius of Loyola, the founder of the Society of Jesus. Some consider the two to be the co-founders of the order. Early in their history, the Jesuits ran afoul of the pope, the Roman Curia and some nations more than once, but mostly for political and economic reasons rather than theological ones.

Bergoglio had been archbishop of Buenos Aires since 1998. He was made a cardinal by Pope John Paul II in 2001. He is the first non-European to lead the Roman Catholic Church in more than 1,000 years, according to reports.

Bergoglio was born in Buenos Aires to parents of Italian heritage. It is said that Bergoglio refused to live in the palatial bishop residence in Buenos Aires and took public transportation to work rather than ride in a limousine. He is also said to cook his own meals.

The National Catholic Reporter reported in a profile 10 days before his election that Bergoglio was runner-up in the 2005 conclave that elected his predecessor, Benedict XVI.

The CIA’s World Factbook says that Argentina is nominally a Roman Catholic nation with 92 percent claiming that affiliation and less than 20 percent practicing. About 39 percent of the world’s 1.2 billion Roman Catholics live in Latin America.

White smoke billowed from the chimney atop the Sistine Chapel at 7:06 p.m. local time (2:06 p.m. EST) but Bergoglio did not appear publicly until more than an hour later.

The bells of St. Peter’s Basilica started ringing and the thousands of people waiting in the rain in St. Peter’s Square began to cheer. Others began rushing to the square. The crowd – “that goes on as far as the eye can see,” according NBC news anchor Brian Williams — chanted “Viva il Papa” even before Bergoglio appeared.

The first man who appeared on the balcony was Cardinal Jean-Louis Tauran, president of the Pontifical Council for Interreligious Dialogue in the Roman Curia, who announced “Habemus Papam” – “We have a pope” – and the Latin name Franciscus.

Francis appeared on the balcony of St. Peter’s facade, known as the Loggia of the Blessings, about 8:20 p.m. (3:20 pm. EDT) to speak to the vast crowd and to give his first papal blessing.

“First of all let us all pray for the pope emeritus,” he said early in his remarks, leading the crowd in the Lord’s Prayer and a Hail Mary. He spoke in Italian with what some recognized as a slight Spanish accent.

“I ask a favor, before the bishop blesses the people, I ask the people to bless the bishop,” he said. He called for a moment of silence and bowed his head to the crowd.

After giving his blessing, Francis said: “Thank you for the welcome. See you soon, tomorrow I want to pray to the Madonna. Good night and good rest.

Retired New York Cardinal Timothy Eagan spoke about Francis on NBC news during the announcement. “He is a scholar but he is a scholar who knows how to talk to the folks in the parishes, and that’s where it’s at,” said Eagan, who was too old to vote in the conclave.

Francis succeeds Benedict XVI, who ended his eight-year papacy Feb. 28, after announcing earlier that month that he was no longer up to the job’s demands. He became the first pontiff in 598 years to resign.

Cardinals reached the required two-thirds majority, 77 votes, needed for the election of a new pope after two days of voting. Bergoglio apparently was elected on the fifth ballot.

The conclave started on the afternoon of March 12 with a solemn ceremony in the Sistine Chapel following a special Mass in St. Peter’s Basilica, before the secret balloting began.