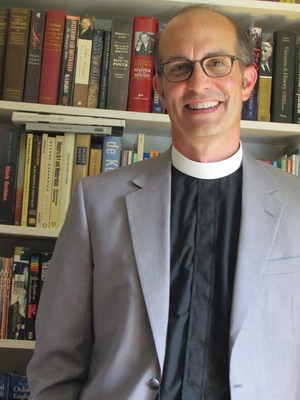 [Episcopal News Service] The Very Rev. Mark Allen Bourlakas, dean of Christ Church Cathedral in Louisville, Kentucky, has been elected as sixth bishop of the Episcopal Diocese of Southwestern Virginia, pending the required consents from a majority of bishops with jurisdiction and standing committees of the Episcopal Church.

Bourlakas, 49, was elected March 9 out of a field of five nominees. He was elected on the third ballot by the Electing Council meeting at St. John’s Episcopal Church in Roanoke.

Pending a successful consent process, the ordination is scheduled for July 20 at the Roanoke Performing Arts Theatre.

The sixth bishop will succeed the Rt. Rev. Neff Powell, who has served as the diocese’s fifth bishop since 1996.

Bourlakas earned a Bachelor of Arts degree in 1985 and a Doctor of Ministry degree in 2012 from the School of Theology at University of the South in Sewanee, Tennessee; and a Master of Divinity from Seabury Western Theological Seminary in Evanston, Illinois in 1997.

Bourlakas is married to Martha and they have three daughters.