The Rev. William Bailey, who in 2004 became the first vocational deacon ordained in the Episcopal Diocese of Newark in more than a quarter century, died March 6 at his home in Morris Plains, New Jersey, after a long illness. He was 81.

“All my life, I had wanted to be a priest,” Bailey told Episcopal Life in 2007. “I had always wanted to do that but never had the discipline to go to school and do the things I needed to do.” 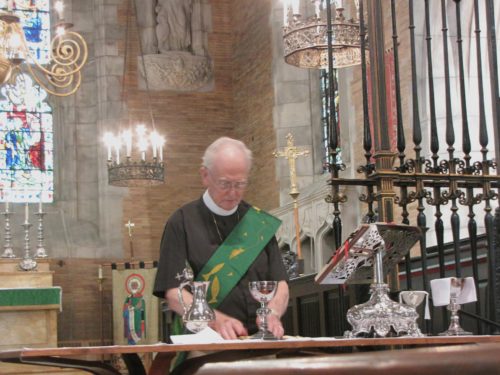 Instead he married, had four children and “did everything else” a layman could do. “Almost every place we moved, I ended up somehow a warden,” he said.

As a young man, Bailey worked as a live-in counselor at the St. Peter’s Home for Boys in Detroit. After marrying, he and his wife, Evelyn, lived rent-free in the rectory of the city’s St. Thomas Episcopal Church, which then had no clergy. Hired as the janitor, he became involved in pastoral work and was named the church’s missioner. Over the next three or four years, he conducted morning prayer services, launched a neighborhood basketball team and helped the parish grow from 13 parishioners to 33.

Meanwhile, Bailey spent 27 years working for a division of General Motors that manufactured equipment for diesel transmissions. He spent a lot of time on the road, calling on potential clients such as fire departments and municipalities — what he called “engineering sales.”

“We didn’t have an end product,” he explained. “We didn’t have a truck. We just had pieces, and you went and tried to convince people that these pieces that you had were what they needed to satisfy their needs.”

“What I do [as a deacon] is what I was doing then,” said Bailey. “It’s dealing with people, trying to discover their needs and helping them. … Our product happens to be our Lord and Savior.”

Because the call to ordination never left Bailey. Not during his GM years. Not while he subsequently taught mechanics and sales for a distributor who serviced diesel products (“I called it the care and feeding of diesels and transmissions.”) Not after he retired in 1993.

He joined an Education for Ministry class at his parish, St. Peter’s Episcopal Church in Morristown, New Jersey, thinking it would help in him lay ministry. Then he discovered he could use it in place of seminary — and that his diocese was reinstituting the vocational diaconate. He “buckled down” to his studies and participated in Stephen Ministry. As a result of his clinical pastoral education, he because a chaplain at an area hospital.

And on June 5, 2004, at age 72, he became the first of five vocational deacons ordained that day by then-Bishop Jack Croneberger – the first in the Diocese of Newark in more than 27 years, Bailey recalled.

Bailey subsequently served as deacon at All Saints’ Episcopal Church in Millington, New Jersey, and as a hospital chaplain and served on the diaconal ordination committee of the diocese’s Commission on Ministry. After retiring from All Saints’ in 2010, he continued to serve as deacon and pastoral associate at his home parish, St. Peter’s.

Diocese of Newark Mark Beckwith will preach and celebrate at a worship service celebrating Bailey’s life on March 13 at 11 a.m. at St. Peter’s. Bailey is survived by his wife, four children, five grand children and five great-grandchildren.

Looking back in 2007, Bailey said he saw God’s hand in all his family’s moves and ministries.

Bailey said he didn’t regret not becoming a priest. “In fact, I’m so pleased that I’m not, because I’m doing the pastoral things that priests often don’t have an opportunity to do. They’re running churches. They’re worrying about budgets. They’re working with vestries. All of the things it takes to run a church is a major, major job. A part of it, as I see it, is being able to give the canonical blessings, to make sacred that which is not.”

“But I am with the people where they are,” he said. “I do that servant ministry, which I really love. … It’s the ministry of every lay person. A deacon really should be the icon to the rest of the congregation, that this is how you live the lay life.”