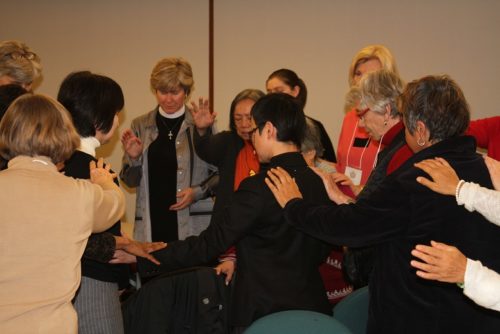 The Very Rev. Tazu Sasamori and her colleagues showed a delegation of Anglican women gathered in New York a video detailing the progress of Nippon Sei Ko Kai’s (NSKK) Let Us Walk Together initiative. (Nippon Sei Ko Kai is the Anglican Church in Japan. It is one of 38 member provinces of the worldwide Anglican Communion.)

The video highlighted the work of the initiative’s 7,000 staff and volunteers who have been involved with everything from helping to rebuild the fishing industry in Jusanhama to teaching Japanese to immigrants in Minami Sanriku, to providing support to some of the 320,000 people still living as refugees.

The video demonstrated the crucial role of NSKK in the relief and recovery phase after the earthquake, tsunami and nuclear disaster hit Japan on March 11, 2011. But it also revealed that many thousands of people were still struggling with the emotional and economic losses caused.

Sasamori, herself originally from one of the worst-hit areas, Tohoku, thanked the members of Anglican Communion for their support since the disaster. Many clergy and volunteers from across Japan and South Korea traveled to the worst-affected areas to help. The primates of the Anglican Church of Korea, the Anglican Church of Canada and the Episcopal Church were just some Anglican Communion leaders who visited. And one of the Episcopal Church’s young adult missioners was working in Sendai this past year.

“The effect of radiation will last for many years to come,” she said. “As you can imagine it affects small children and young women a lot. One of my high school students told me, ‘Now I must give up getting married to someone, or not give birth to a child.

“Among some small children they have discovered some whose thyroid glands have gone wrong. One three-year-old asked his mother ‘Will I die soon?’ So please remember them all in your prayers. For those still living in areas [affected by radiation] not being forgotten is a gift.”

Sasamori — who now works in the Diocese of Tokyo, as dean of St. Andrew’s Cathedral, rector of St. Andrew’s Church and rector in charge of St. George’s Church, Ogasawara — also asked the Anglican Communion to pray for the Tohoku diocese.

“There are only seven priests for a huge diocese. While they are trying to help, support and pray for other people, they are also victims of this disaster themselves.”

Following the presentation, about 30 Anglican women — who are in New York for the 57th U.N. Commission on the Status of Women — made an immediate response to the appeal by gathering around the NSKK representatives and prayed for them and their country.