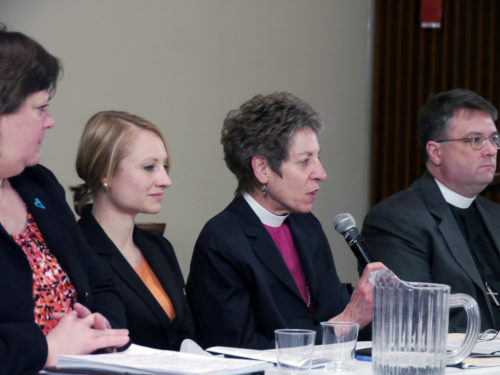 Lynnaia Main, the church’s officer for global relations, Sarah Dreier, the church’s Office of Government Relations legislative representative for international policy and advocacy, Presiding Bishop Katharine Jefferts Schori and the Rev. Brian McVey of the Diocese of Iowa, during an during an hour-long, churchwide conversation on human trafficking March 6. Photo/ENS

[Episcopal News Service] There are more human beings in bondage today, twice as many as at the height of the slave trade, working in conditions of forced labor and sexual servitude in what is a $32 billion a year business, second only to the illicit drug trade, said Presiding Bishop Katharine Jefferts Schori in her opening remarks during an hour-long, churchwide conversation on human trafficking March 6.

Of those enslaved, she said, 80 percent are women and girls, but men and boys are also caught in situations of forced labor, forced marriages, illegal adoptions, the making of pornography, domestic servitude, the harvesting of organs, child beggars and child soldiers.

As Christians, Jefferts Schori said, “we are charged to care for the sojourners in our midst.”

Jefferts Schori led the hour-long conversation, which focused on defining human trafficking and showing how it links with violence against women and girls. The church-sponsored event, streamed online from the Episcopal Church Center’s Chapel of Christ the Lord in New York, was one of many off-site gatherings scheduled to coincide with the 57th annual United Nations Commission on the Status of Women. This year’s theme is the elimination and prevention of all forms of violence against women and girls.

(The forum is available on demand here.)

Panelists included: Sarah Dreier, the church’s Office of Government Relations legislative representative for international policy and advocacy, addressing advocacy on the federal, state and local levels and the presence of trafficking across the world and the Episcopal Church; the Rev. Brian McVey of the Diocese of Iowa, whose congregation is involved in a ministry of presence at one of the largest truck stops in the country, speaking about ministries operating throughout the Episcopal Church in response to human trafficking; the Rev. Terrie Robinson, coordinator of the Anglican Communion’s networks and women’s desk officer, discussing communionwide actions and policies; Laura Russell, a lawyer from the Diocese of Newark, addressing the church’s policies and implementation based on General Convention resolutions; and Lynnaia Main, the church’s officer for global relations, talking about the United Nations’ response to human trafficking and Episcopal Church involvement.

Dreier, who is based in the church’s Washington, D.C. office on Capitol Hill, shared good news in that the U.S. Congress last week, as part of the Violence Against Women Act, renewed the Trafficking Victims Protection Act, which calls for increased screening for potential victims at international airports — trafficking hot spots — and allows victims of trafficking to gain temporary immigration status in the United States.

“But it doesn’t mean our work is done,” she said, adding that, with the exception of the state of Wyoming, 49 U.S. states have passed human trafficking legislation, and 39 states are pushing for stronger trafficking laws.

Human trafficking, Dreier said, exists in every country of the world, and therefore in every country and every diocese where the Episcopal Church is present, and the best thing Episcopalians can do is investigate the laws in their states and work toward strengthening those laws aimed toward “protection, prevention and prosecution.”

McVey, who serves as the rector of St. Alban’s Church in Davenport, Iowa, suggested that the first thing people can do to combat slavery in their midst is to pray, and the second thing to do is to begin to educate people about the existence of trafficking.

In practical terms, he suggested, educating young girls who might be targeted by traffickers online through Facebook and other social media, about the dangers; telling men to quit buying pornography and educating men who have been arrested for purchasing sex about where their money goes and how it violates women; directing law enforcement to places where trafficking exists; and lobbying legislators for stronger human trafficking laws.

(Episcopalians, dioceses and parishes across the country, in places as different as south Florida and Iowa, are engaged in combating human trafficking through awareness and action. )

Russell, who has worked with trafficking victims for more than 10 years, pointed out that foreign nationals are not the only victims of trafficking, and that domestic runaways can also end up trafficked.

Nationally, the U.S. Department of Justice reports that 100,000 to 300,000 children, average ages 12 to 14, are at risk for commercial sexual exploitation, a form of human trafficking, each year in the United States.

Main also talked about the important work of Anglican Women’s Empowerment in the combatting of human trafficking.

Robinson, who works across the Anglican Communion, talked about the Anglican Consultative Council’s passage of a resolution to address trafficking in persons last October during its meeting in Auckland, New Zealand, and she talked about developing and sharing model practices for addressing prevention and rehabilitation of victims.

“We have a special place in this issue because we are the body of Christ in the world,” said Robinson, adding that that includes not only sharing the trauma associated with human trafficking, but also the Good News.

At the close of the conversation, each of the panelists reminded those present both in the room and online, not only to remember the victims, but also recognize their own role in human trafficking. (Visit http://slaveryfootprint.org/ to calculate how many slaves work for you.)

Other Episcopal Church-related off-site events scheduled in conjunction with the UNCSW on March 6 included an international panel discussion on the elimination and prevention of all forms of violence against women and girls hosted by the L.O.V.E. Task Force on Non-Violent Living at the Church of the Holy Trinity in Manhattan. Sarah Eagle Heart, the church’s program officer for Native American and indigenous ministries, was scheduled to participate on the panel.