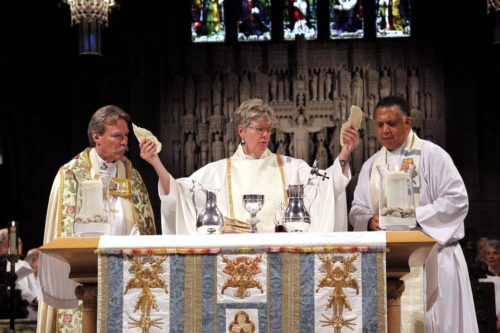 [Episcopal News Service] In a denomination that prides itself on both/and and the via media, it is perhaps the quintessential clergy job: Episcopal cathedral dean.

“It’s such a complicated job, because you’re not a rector and you’re not a bishop,” said the Very Rev. Tracey Lind, dean of Trinity Episcopal Cathedral in Cleveland since 2000.

“My job description very clearly says my job is to be the principal preacher and liturgical officer of the cathedral and lead the institution, and I am expected to have a civic leadership role,” she said, adding, “Although I am first and foremost in my heart a pastor, that is less my job than it was when I was the rector of a church.”

“My work as a cathedral dean is really very fast-paced and varied,” said Lind, who was among the first women and one of the first two openly gay clergy called as Episcopal cathedral deans. In one day, she might address the media, welcome a group of visiting dignitaries meeting on campus, work on the budget and meet with governing bodies. “Or I could be counseling a stranger in need of food and shelter who just wandered in because it’s an urban church.”

An Episcopal dean’s job is complicated partly because, excluding exceptions such as the National Cathedral in Washington, D.C., and St. John the Divine in New York, Episcopal cathedrals first were parishes, she said. Cleveland’s Trinity Parish, for example, was established in 1816. “It lived as a parish for 100 years, and then under Bishop [William] Leonard, a cathedral was built and the congregation of Trinity parish moved into the new digs and became the cathedral congregation.”

While she isn’t called the rector, “I function as the rector and dean of Trinity,” Lind said.

It’s a job with many possible permutations.

In the Episcopal Church, she said, “some people actually carry the title of rector and dean. In some places, the bishop is the ecclesiastical authority of the cathedral.” The dean also may be a member of the bishop’s staff and could be called by the bishop or elected by a vestry with the bishop’s approval.

“That’s the way it is here,” Lind said. “The search committee elects a dean, and the bishop nominates that dean to the vestry. I serve with all of the tenure of a rector.” Her vestry is the governing board, and the cathedral chapter, which meets less often, is advisory.

Second is a diocesan constituency. Clergy on holiday and members of other congregations often visit; the cathedral hosts diocesan events; and it models liturgical and other innovations.

“One of the things that is particular in the life of a cathedral is that the bishop is present on Christmas and Easter,” Lind said. So, on what would be the two biggest days for a rector in a typical parish to preach and preside, Lind and the bishop alternate roles every other year for the Christmas midnight service and the 11:15 a.m. Easter service. At Easter Vigil, the diocese’s retired bishop suffragan presides while she officiates and preaches.

“The relationship between the dean and the bishop is really critical, and I’ve been really blessed to have good relationships with the bishops with whom I’ve served throughout my ministry,” she noted.

The third constituency is the city, where people view Trinity as Cleveland’s cathedral. “When the city’s going to gather to grieve and to celebrate, it often happens here,” Lind said.

A cathedral should “be a place of spiritual inspiration for the city and for the diocese,” she said. “I think cathedrals are called to be sacred public spaces. I think that’s one of our most important roles.”

“The work of a cathedral dean is different from a rector because of this sense of often being the voice of witness for the diocese or for the church,” she said. “People expect to see, at least in this diocese, the cathedral dean quoted in the newspapers or writing op-eds or speaking to the media if something happens in this diocese, in this city. After the shootings in Connecticut, we took some action around gun control, and we issued a statement, and the media came here for reaction.”

An op-ed Lind wrote for The Plain Dealer four years ago led to the formation in June 2011 of Greater Cleveland Congregations, a coalition of faith communities and partner organizations working toward social justice.

The group has established five issue areas – jobs, education, health care, criminal justice and accessible food – and logged several successes, she said. “We helped the community come together for innovative school reform legislation, and we helped pass a school levy in a landslide victory.”

As she detailed in a column in January, the coalition has tackled criminal-justice inequities, including supporting legislation removing barriers to employment for ex-offenders. Most recently, the coalition led a strong lobbying effort that contributed to Gov. John Kasich’s decision to expand Medicaid to cover 600,000 uninsured Ohioans.

Staying relevant
“I think the role of cathedrals is shifting and changing as the structure and ethos of the Episcopal Church shifts and changes,” Lind said. The goal is to “make an 11th-century concept relevant to the 21st century. How to not make it an anachronism – that’s the challenge.”

Previously, cathedrals were designed as centers that drew people from the countryside and provided a ministry of hospitality, music, art and education, Lind said. “A cathedral was created to be a place of pilgrimage. You might not be able to make pilgrimage to Jerusalem or to Rome, but you could make pilgrimage to the cathedral in your city.”

There’s a certain transience to the cathedral congregation. “We sit in the middle of a university campus,” Lind said. “But people also come to the cathedral when they come to town until they figure out where they’re going to live. Then they might settle into a suburban community.”

Sometimes people migrate to the cathedral while their parish is in conflict. Or a church’s longtime lay leaders or wardens spend six months or so there when they step aside for new leadership. Or newly retired clergy come while they discern what’s next.

“Trinity on any given Sunday will have anywhere from 10 to upward of 20 clergy in the congregation, either nonparochial clergy or retired clergy or clergy in transition or clergy on vacation or clergy on leave,” Lind said. Trinity’s pledging members include clergy from various denominations – Lutheran, United Church of Christ, Methodist, Baptist. “We have a number of chaplains that are members here, or they run church-affiliated organizations, or they’re on university faculty teaching religion and they choose to worship here.”

The congregation also has many members in their 20s and 30s, and about 150 children. “This congregation is getting younger by the day as our city experiences a renaissance,” the dean said.

The cathedral is diverse in other ways as well. “For the entire time that I have been dean of this cathedral, we’ve had a racially mixed clergy team … and that’s important,” Lind said. “That was true when I was the rector [of St. Paul’s Episcopal Church] in Paterson, [New Jersey]. I think what you see at the altar affects what your congregation’s going to look like. If you want to look like the kingdom of God, then you’ve got to have that in your leadership, lay and ordained. If you want to be a rainbow place, you really need to look like the rainbow.”

“What we do here are many seatings at one table,” Lind said. So the first Sunday of the month includes an “early bird special,” a “very emergent” jazz Mass, a choral Eucharist and an evening solemn sung Eucharist with “smells and bells.” Other Sunday evenings feature Compline, Celtic worship and other liturgical forms aimed at appealing to students. Wednesdays bring Evensong. “It’s as good here as it is in any cathedral anywhere in the United States or England … and it’s a congregation of around 100 people [at that service].”

Worship is another aspect making cathedrals “interesting and unique and challenging,” Lind said. “On the one hand, I believe that cathedrals are places where I think we’re called into liturgical reform. … On the other hand, it also represents the diocese as a whole.”

The cathedral hosts diocesan liturgies, such as the clergy renewal of vows, confirmations and deacon ordinations, as well as middle school pilgrimages, acolyte festivals and musical boar’s head festivals.

“I think we are expected to offer liturgical excellence,” Lind said. “In this cathedral, we do that with a commitment to inclusive language. This might be the only place in the diocese where on a regular basis you hear Enriching Our Worship,” a collection of supplemental liturgical materials, including eucharistic prayers, approved for use by General Convention. “Sometimes I think it gives people courage to take it back to their own congregation.”

The cathedral also may host speakers parishes can’t afford – or find too controversial. “People will use it as part of their continuing education or part of their parish education,” she said.

Lind’s interfaith background – her father was Jewish, her mother Christian – makes her sensitive to anti-Judaism, intentional or unintentional, when crafting liturgies. “How do we proclaim Jesus as our way, our truth and our life and how do we proclaim the gospel as good news in a pluralistic world is something I have a deep and abiding sensitivity and appreciation about,” she said. “I think it’s made for some very strong relationships with local synagogues because I truly believe that there are many ways to come to God and there are many names by which we call God.”