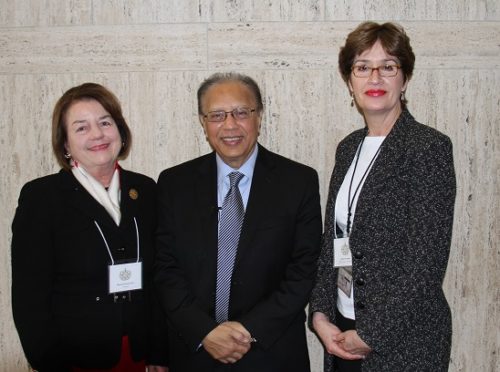 At a United Nations Commission on the Status of Women (UNCSW) side event hosted by the Anglican Communion Office at the UN (ACOUN) at the Chapel of Christ the Lord in New York, Chowdhury gave a speech titled “End of Violence is not the End – Ensure Women’s Equality.”

Introduced by ACOUN founding member Marnie Dawson Carr as a man of “effective action,” Chowdhury — a tireless spokesperson for peace, women, children, and the poorest segment of humanity — began by paying tribute to those across the Anglican Communion working to end violence against women around the world.

“I was very happy to learn about what the Anglican Communion does with regard to the issues before the United Nations, particularly on issues which effect women’s participation in society. Trafficking is a major area of interest for the Anglican Communion and I am very happy that it has been so because that’s an area that has not received our attention…Congratulations to all of you for that.”

The ambassador, a Bangladeshi, gave an impassioned plea for women to be treated equally in all areas of life. “There is no time to lose,” he said. “We need to continue our struggle even with greater vigour … We should never forget when women are marginalised there is little chance for the world to get sustainable peace and development in the real sense.”

He said that to achieve “optimal wellness” for the planet, the nations of the world had to value both men and women equally and ensure women’s participation at the highest levels of decision-making, particularly in conflict reconciliation.

In a question-and-answer session following the speech, one of the young Anglican women delegates asked, “What advice would you give young girls just starting on their journey of equality?”

He answered, “It is important for you to recognize and convince yourself of the inherent equality between two human beings. Try to assert that whenever the opportunity comes. Do not sit back and fear [that you] will be the only person to say that. It is not necessary … to be aggressive or abusive or outspoken in an uncivilised way. You can assert your point in gentle but firm ways.”

He added that girls should let those around them — in their workplace, community and family — know that they have determined to be equal. “I would say that you should convince yourself that ‘I am equal to everybody.’ Don’t take it upon yourself [to believe] this is not a girl’s area [or] this is a girl’s role. As a human being you are equal, and equal to everybody.”

The ambassador also stressed that equality begins in the home with girls and boys being taught to treat one another as equals.

Following the presentation, the Rev. Terrie Robinson, coordinator of the Anglican Communion’s networks and women’s desk officer, said, “The ambassador’s presentation spoke to many issues at heart of the growing Anglican movement to end violence against women and girls. The Anglican Church of Southern Africa and the Church of North India have already shown how effective partnerships can tackle trafficking in the areas of prevention, protection, and the care and rehabilitation of survivors.

“Tomorrow, the Presiding Bishop of the Episcopal Church will be taking advantage of the gathering of Anglican women in New York to host a churchwide conversation on trafficking. As people of faith rooted in our communities we have so much to contribute in working against violence in all its forms.”

The Anglican delegation of women from around the Anglican Communion is engaging with this year’s priority theme for the Commission on the Status of Women: the “Elimination and Prevention of all Forms of Violence Against Women and Girls.”

The women are sharing experiences and highlighting issues of concern as well as the progress that has been made for women in their respective regions. Each delegate will represent her own Anglican province and bring local knowledge and insights from many countries, including Australia, Brazil, Burundi, Canada, Japan, Korea, New Zealand, Nigeria, Peru, Sri Lanka, South Sudan, England, Scotland, the United States, South Africa and Zimbabwe.

For more information about the Anglican Communion delegation at the U.N. Commission on the Status of Women please contact Rachel Chardon by phone at +1-212-716-6262 or via e-mail at unoffice@anglicancommunion.org. Media should contact Mr Jan Butter on jan.butter@anglicancommunion.org