[Anglican Communion News Service] The first three-day Indaba process specifically designed for women to discuss the issue of violence has been hailed a success by participants.

Women from North America and Africa said they were so impressed with the format, they plan to replicate the process in the future. Eleven women travelled to Manhattan, New York, from across Africa’s Great Lakes region and elsewhere in the U.S. to spend March 1-3 in deep conversation across difference.

Speaking after the gathering, participants made clear it had been a significant experience for everyone. Burundi representative Mathilda Nkwirikiye said: “It is like when your neighbor lets you look through a window into his house. You learn a lot of things … So I have learned a lot of things about these people because they were willing to share their feelings about their experiences and their community’s experiences.” 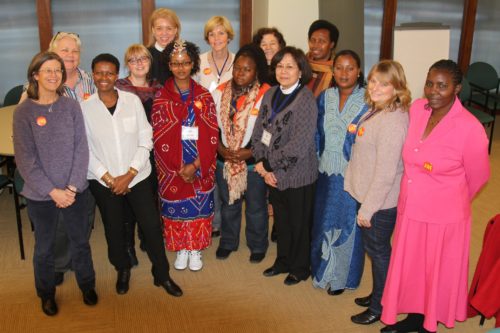 Participants following their three-day Indaba on violence against women and girls.
Photo: ACNS

She added that she had been surprised by how easily women who met as strangers talked about such a difficult topic — violence against women and girls. She also praised the Indaba model. “We generally go to conferences where facilitators have planned the lines of the conversation, but we built [the agenda] ourselves as a group; we said what we wanted to talk about and how we wanted to go through the conversation.”

Diane Eynon is the chairperson of the Anglican Women’s Empowerment (AWE) group that facilitated the event, which was hosted at the Episcopal Church’s offices in New York City.

“We believe this experience will allow us to take our work with young girls and women around the Anglican Communion to a higher and more effective level,” said Eynon. “Indaba potentially provides us with a process and framework to continue what we have been doing and will continue to do in the future: bringing girls and women from around the world together…to learn, understand, collaborate, inspire, and support each other in our work for women’s empowerment, wherever that may be.”

Kim Robey, retired executive director of AWE, agreed. “It exceeded our expectations … Our goal was to deepen relationships and to start the conversation about how we might work together in the future and that happened.”

Both said they were hopeful that a next step would be similar gatherings, in the U.S. and also in Africa, with girls from America taking part in an Indaba conversation with girls from different countries in Africa.

Lucie Nzarambal is vice chairperson of the Mothers’ Union in Rwanda and a district councilor representing women. She agreed the experience had been very good, but added there had been challenging moments in the conversations: “When we were talking and hearing about stories [of violence against women and girls] people were sad, they were crying. We felt bad to hear that women like us had been raped, been violated. Those were difficult times.”

She explained that, thanks to the gathering, she would be going back with new tools to address violence in Rwanda. “This is the first time I’ve heard about ‘safe spaces’ where a woman can come and talk and break silence about the violence [she has experienced]. That’s something I will take back to my country; as is the idea of gathering two or three women together in small groups, giving them the opportunity to break the silence [about abuse]. Women are not able to talk about it in large gatherings.”

The youngest participant, Faith Meitiaki from Kenya, said she had been surprised to discover that “women in the developed world” struggled with life too.

“They have an education, they are economically empowered, so I have never thought about the challenging part of their lives. I realized that every woman has challenges, and are also fighting sexual abuse and domestic violence. For me that was an eye opener: that, as long as you’re a woman, you will always face violence. That was a common denominator between the women from Africa and America.”

The two facilitators were: