Editors’ note: This story was corrected Feb. 28 to remove reference to the Episcopal Peace Fellowship’s Palestine Israel Network having issued “A Prophetic Challenge to the Executive Council.” The network only publicized the document.

Council passed a resolution, by a voice vote with two members dissenting, affirming what it called General Convention’s “prophetic witness” expressed in Resolution B019 that bishops and deputies passed in July.

Resolution B019 reaffirmed the church’s official policy, based on resolutions passed at previous conventions, committing to a two-state solution in which a secure and universally recognized state of Israel lives alongside a free, viable, and secure state for the Palestinian people, with a shared Jerusalem as the capital of both. 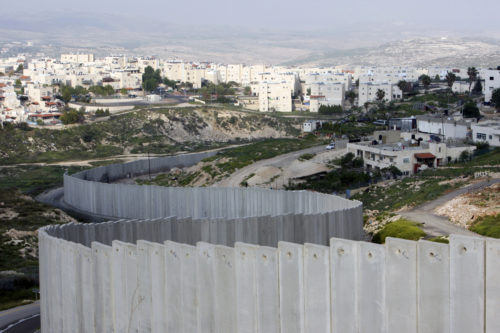 A section of the controversial Israeli barrier is seen between the Shuafat refugee camp (right), in the West Bank near Jerusalem, and Pisgat Zeev (rear), in an area Israel annexed to Jerusalem after capturing it in the 1967 Middle East war. Reuters photo/Ammar Awad

It also affirmed positive investment “as a necessary means to create a sound economy and a sustainable infrastructure” in the Palestinian Territories. It called on the church to support “Jewish, Muslim, and Christian study on peace with justice in the Middle East,” and produce an annotated bibliography of resources.

A&N committee chair Lelanda Lee of Colorado told her colleagues while proposing council’s resolution that it was only the first time they would engage what she called “the difficult subject” of Middle East conflict.

* “affirms and celebrates” the recent recommendation of the Executive Council Economic Justice Loan Committee to invest $500,000 in the Bank of Palestine. That decision was made in response to B019’s call for “positive investment as a necessary means to create a sound economy and a sustainable infrastructure in the West Bank and the Gaza Strip.” The resolution said the decision is the first such positive investment made by the Episcopal Church in the economy of the Occupied Palestinian Territories, and the resolution urges dioceses and other church entities “prayerfully to consider similar investments;”

* affirms that it is the church’s policy to engage in the constructive corporate engagement policies toward the Israeli-Palestinian conflict adopted by the Executive Council in October 2005 and implemented by its Committee on Corporate Social Responsibility since;

* affirms that the church does not support boycott, divestment and economic sanctions against the state of Israel nor any application of the church’s corporate engagement policies toward such ends;

* affirms that it is the church’s policy that all foreign aid given by the U.S. government – including aid to Israel and the Palestinian Authority – should be “comprehensively and transparently accounted to the American people and held to the same standards of compliance with all applicable laws,” as advocated during the last two triennia through more than a dozen letters to the Congress sent by the Presiding Bishop and other bishops of this church and the Office of Government Relations, and embodied in the Feb. 2, 2009 “Religious Statement on Foreign Assistance Reform,” adopted by an interreligious coalition co-chaired by the Episcopal Church and repeatedly communicated to the President and the Congress in the intervening years.

* affirms that the foreign-aid accountability policy “should be applied through such advocacy toward its universal adherence rather than targeted for selective application to some recipients and not others;” and

* calls for a B019 coordinating committee be appointed by March 15 to assure the effective and thorough implementation of the policies the resolution advocates.

Council’s action came after extensive conversation in A&N and World Mission, that included participation by Presiding Bishop Katharine Jefferts Schori and President of the House of Deputies the Rev. Gay Clark Jennings.

In mid-January 14 Episcopalians and Anglicans issued what they called “a prophetic challenge to Executive Council,” pressing council to intervene in the implementation of the church’s policies on the Israeli-Palestinian conflict.

Specifically, the signers of the letter challenged council to “immediately move forward with our church’s corporate engagement policy so that our financial resources are not being used to support the infrastructure of this suffocating occupation.” Secondly, it asked council to “immediately tell the U.S. Congress that the church supports an Oct. 5, 2012, letter from 15 ecumenical voices who called for “accountability of Israel’s use of foreign aid from our government.”

Jefferts Schori and Jennings said at the time that the letter was extremely unhelpful and disregards due legislative processes.

A number of people later signed on to an accompanying “petition of support.”

Lee did not allow representatives of the Episcopal Peace Fellowship’s Israel Palestine Network, the group that hosted the council challenge, to speak during the committee meetings and they did not address the full council.

She told the council Feb. 27 that her committee did not take testimony or comments from visitors because it determined that “indeed we are not General Convention and we are not a legislative committee that holds legislative hearings; that we are not the appropriate place to have one set of representatives or another set of representatives come and make presentations to us,” she said. Instead, the members talked among ourselves as the board of directors of the [Domestic and Foreign Missionary Society],” she said.

The committee discussions included a presentation from Harry Van Buren, a consultant to council’s corporate social responsibility committee. He explained how the committee has had a dialogue in the past with multiple companies whose activities in the Occupied Palestinian Territories have been cited as problematic by some observers. Van Buren also discussed shareholder resolutions that that committee has initiated or joined at the council’s behest.

Hicks said she was “disappointed but not surprised” by council’s resolution “because there’s a tension between the way [the leadership] of the Episcopal Church is seeing Palestine-Israel and the way numbers of us who are more activist see the issues.”

For instance, she said, B019’s called for education, pilgrimage and interfaith dialogue are part of the “patchwork quilt of doing the work” but, Hicks said she does not hold out much hope for those activities.

“I don’t see how that’s going to help end the occupation and for me that’s the key,” she said.

Smith said he wished council’s resolution had responded directly to his group’s challenge.

He and Hicks “have felt really isolated” during council’s three-day meeting and he hoped that future conversations “would truly be open and that all would be welcome at the table.”

During this triennium, Hicks said the church ought to encourage the sorts of pilgrimages to Israel and Palestine that will “open people to the political side of things.” She said she hoped the church would specifically support pilgrimages by young people, people of color and those people who have not been to the Middle East. Education, interfaith dialogue and the development of the bibliography ought to be encouraged for those people who are interested in those activities, Hicks added.

For those who want to be take a more activist position, “I would invite the wide church not to try to silence us and shut us down,” she said.