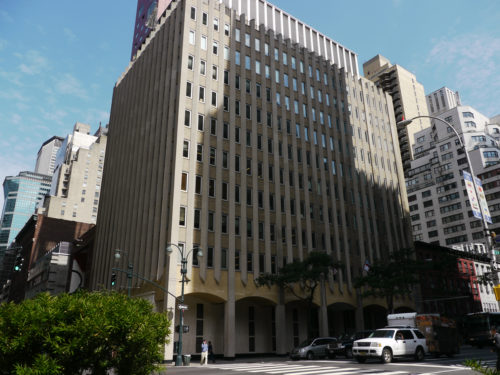 The Episcopal Church Center at 815 Second Ave. in New York would remain the denomination’s headquarters under a recommendation being considered by the Executive Council. ENS photo/Mary Frances Schjonberg

[Episcopal News Service – Linthicum Heights, Maryland] The church’s denominational offices would remain at the Episcopal Church Center in New York if the Executive Council accepts a recommendation it received Feb. 26 from a group of Domestic and Foreign Missionary Society executives.

Of four main scenarios analyzed, “God’s mission of reconciliation is best furthered” by remaining at 815 Second Ave. in Manhattan and consolidating DFMS operations at the church center to free up even more space to rent to outside tenants than the 3.5 floors that are currently leased out, a report to council says. This choice would be “in the organization’s best interests financially, both in terms of budget effect and for long-term investment purposes,” according to the report.

The DFMS, the church’s corporate entity, currently rents 2.5 floors to the Ad Council and one floor to Permanent Mission of Haiti to the United Nations. The church center has nine floors of office space.

The study began in February 2012, five months before General Convention met, when council’s Finances for Mission committee asked DFMS management to study the possible relocation of the church center.

General Convention Resolution D016, passed last July, said “it is the will of this convention to move the church center headquarters” away from that building.

The report said the group believes that “the real underlying energy in examining the location of the church center is less about its location and more about how it actually functions,” adding that the writers “could not be in greater agreement about the need to reform how the Domestic and Foreign Missionary Society functions and serves the needs of the church, particularly as to fostering, encouraging, and supporting mission at the local level in partnership with local leadership.”

“Perhaps rather than shifting the locus of our communal anxiety from one site to another, we would be better served in the long run to use our best judgment to make a rational and strategic decision in the best interests of the church’s engagement of God’s mission and then clearly articulate that decision to the church.”

Episcopal Church Chief Operating Officer Bishop Stacy Sauls told the council that the question of relocating the church center is regularly asked. The first time was about eight years after the building began to be used, and the issue seems to return at the same interval, he said.

Global real estate firm Cushman & Wakefield assisted in the study and its work was paid for by the Diocese of Los Angeles.

“We think the best alternative is to sell the asset,” John Cushman, the chair of the real estate firm, told council’s Finances for Mission and Governance and Administration for Mission committees earlier in the day. That conclusion stems, he said, from the sense that real-estate ownership and management is “not aligned with the core competencies of the church.”

Later in the day, Nat Rockett, Cushman & Wakefield executive vice president, told the entire council that it is not unusual that his firm came to a different conclusion that the Executive Oversight Group because the real estate firm looked at a different, limited set of factors.

After the recommendation was presented, council discussed the conclusion during an executive session on the second day of council’s three-day winter meeting. The session was closed because part of the discussion of the group’s report involved proprietary information such as the anticipated per-square-foot market rental rate for the 11-story building and its presumed value on the Manhattan real estate market. That information will also be absent from the version of the report posted here.

Council took no action on the recommendation and Finances for Mission and Governance and Administration for Mission will take up the report at council’s June 8-10 meeting.

The Executive Oversight Group came to its unanimous conclusion, the report says, after analyzing five “mission considerations,” including the unity of the church, mission partnerships, continuation of services provided, promoting justice and maximizing financial resources for mission. The overall consideration, according to Sauls, was stewardship in terms of financial management of the church’s resources for mission.

The unity of the church is most strengthened when the church’s home office is accessible to its members, they say. New York best serves that goal because 80 percent of  Episcopalians (nearly 567,000, based on 2011 average Sunday attendance) worship in the central and eastern time zones and the city is most conveniently reached by air by Episcopalians from outside the United States, according to the report.

Important missional partnerships would be negatively impacted by moving the church center to another city, the report says, because such a move would mean a greater separation between the DMFS and such partners as the Church Pension Group, Episcopal Relief & Development, Trinity Wall Street, the United Nations and the Anglican U.N. Observer, resettlement agencies including Episcopal Migration Ministries, the Episcopal Church Foundation, the National Association of Episcopal Schools and the Colleges and Universities of the Anglican Communion.

A move from New York would have “a very negative impact” on continuing to provide services to the church and the world because 73 percent of the New York staff (75 of 102 employees) would likely be unwilling to leave the city. The report estimates it would cost $2.6 million for severance and moving costs. While money might be saved by reduced labor costs in other cities, those employees who did move with the church center would have their salaries frozen while replacement workers are hired at prevailing, presumably lower rates. Thus, a two-tiered wage structure would exist which could have a negative effect on staff morale, the report says.

“We question the prudence of such a disruption at precisely the time when the church is reforming itself to have an increasingly missional focus and the staff is most needed to facilitate, encourage, and lead the initiatives being implemented as part of the Marks of Mission Budget as adopted at the 2012 General Convention,” the writers say.

In addition, Episcopal Migration Ministries might be threatened by a move because it is unlikely many staffers would leave New York since resettlement jobs abound there. If a major loss of staff impacted EMM’s abilities to offer the services for which it receives government grants, the ministry might have to be discontinued, the report says.

The report expresses concern about leaving New York because of the laws that might be encountered elsewhere. Married same-sex couples would be forced to choose between their jobs and moving to a jurisdiction that did not recognize their marriages, the writers suggest. New York recognizes same-sex marriage.

“We wish to be clear that we, as management, will implement whatever needs to be done to serve the church, and further, that we believe the entire staff of the Church will exercise its best efforts to the same end,” the writers say. “However, we do wonder about the effect on our prophetic voice of the indiscriminate dismissal of staff in order to replace them with cheaper labor absent some persuasive, if not compelling reason, to do so.”

“As leaders in the church, we have a particular concern about the effect on our witness on the issue of marriage equality when some married persons employed by us would be forced to make a choice between keeping their jobs and having their marriages recognized.”

And, a number of the cities considered are in states with “regressive immigration laws, laws banning marriage equality, and laws that encourage gun violence,” the report says.

“What does where we locate our home office say about what we believe?” the writers ask.

The report’s recommendation also calls for negotiating written agreements with all the associated agencies currently housed rent-free on 1.5 floors of the church center “to more equitably share costs, risks, and rewards, and most importantly, to enhance missional partnerships.” Those agencies include Episcopal Relief & Development, Episcopal Church Foundation, National Association of Episcopal Schools, Colleges and Universities of the Anglican Communion, the Anglican United Nations Observer, the Bible and Common Prayer Book Society and the Church Periodical Club. The DFMS also provides various services to the agencies, including accounting and banking services, benefits administration, mail, telephone and information infrastructure at no charge.

Of those seven agencies, the DFMS only has a written agreement with Episcopal Relief & Development, which occupies close to half of the space given over to the agencies.

“What we have never done before is consciously take into account, and fully informed the church, that these arrangements have a real cost — an actual operating cost and a cost in terms of lost revenue from otherwise rentable space,” the report says.

Council resolved in October 2008 that any new agency housed at the church center would pay a negotiated rent “unless there are compelling reason not to charge rent,” the report notes.

The writers recommend charging the agencies for the space and making a grant to offset the charge, in whole or in part. This “would make the reality that the current arrangement has actual costs being borne by DFMS more clear to all and help all parties understand the actual costs of their ministries and plan accordingly,” they say.

The report notes that at least four agencies (Episcopal Relief & Development, Episcopal Church Foundation, Colleges and Universities of the Anglican Communion and the Anglican United Nations Observer) probably would not leave New York if the DMFS moved. Thus, they would be faced with having to rent space.

“This led us to a simple question: If our affiliated agencies would be willing to pay market rates to a third party, might they be willing to share in costs with the entity that has hosted them at no charge over many years?” the writers say.

The grants in this triennium would completely offset the rent charged, but in the future, the report suggests the rent offset by those grants might be less than 100 percent and could be negotiated differently with each agency, “depending on differences in circumstances and the goals of the partnership.”

Forging such agreements “would distribute the risk of owning the church center among several entities instead of concentrating it only in DFMS,” the report says.

The report acknowledges that part of the interest in church center relocation was rooted in a desire to eliminate debt service from the DFMS budget. The budget includes service on two loans and a line of credit for operating expenses for which there is no balance.

One loan is for a parking lot in Austin, Texas, that was purchased as a potential site for relocating the Archives of the Episcopal Church. Revenue from that operation covers the interest on the loan and has allowed for repayment of some of the principal, the report says.

The second loan, for $37 million, was taken out in 2004 to pay for an extensive remodeling of the church center after council decided not to relocate the denominational offices. Much of that work had to do with asbestos abatement. The loan was renegotiated in 2010 and is due to be renegotiated again in 2016, the report says.

Because the interest rate is 3.69 percent and the DMFS expects annually to earn 8 percent on its investment (based on experience), it would be more prudent to invest the proceeds from the sale of the church center rather than pay off the loan, the report says.

The report also includes a detailed analysis of the eventual financial impact over 15 years of choosing each of the four scenarios.

In other plenary business Feb. 26, council:

* authorized a $250,000 line of credit for the Episcopal Church in South Carolina.

* heard a recap of the 15th meeting of the Anglican Consultative Council meeting late last year in Auckland, New Zealand by Josephine Hicks, the lay member of the Episcopal Church’s  delegation. Hicks’ three-meeting term ended with the Auckland meeting.

* received an update on earthquake recovery in the Diocese of Haiti.