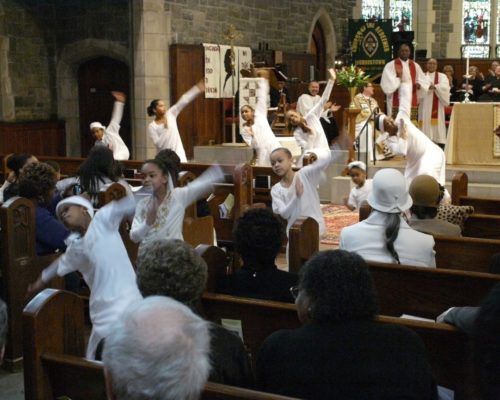 Members of the F.A.I.T.H. Liturgical Dancers from Bethel AME Church in Morristown, New Jersey, perform during a combined service at nearby Church of the Redeemer. The service launched a six-month celebration of the 150th anniversary of the Emancipation Proclamation at the Morristown Episcopal church. Photo/Randy Johnson

[Episcopal News Service] Emancipation “is in our DNA” at Church of the Redeemer  in Morristown, New Jersey, says the Rev. Cynthia Black, rector. “We talk about liberation. We live liberation.”

So when it came time to commemorate the 150th anniversary of the Emancipation Proclamation, the church that calls itself “a Christian liberation community in the Episcopal tradition” planned far more than a one-day or Black History Month event.

Starting on Jan. 20, Martin Luther King Jr. Sunday, and ending June 16 with a “Juneteenth” celebration of the end of slavery, Redeemer is hosting a series of guest speakers and preachers, exhibits and liturgies in a program called “Forever Free: Reclaiming the Emancipation Proclamation.”

The idea for the six-month commemoration emerged after last year’s Easter Vigil, where as part of the liturgy a church member told the story of Redeemer’s origin, when members of a neighboring Morristown church left over theological differences to start their own congregation. Soon after, parishioner Chuck Dickerson, who teaches history at the county college, approached Black and said, “You know, that’s one version of the story. Here’s another.”

“He talked about the divisions at the time over slavery and how his understanding was that, as the two churches chose to go separate ways … it was those who were involved in emancipation and abolitionist kinds of activities who formed Redeemer,” she recalled. They had a long conversation, and he mentioned the proclamation’s approaching 150th anniversary. “I said, ‘It seems like this is too good an opportunity to pass up. What do you want to do?’” 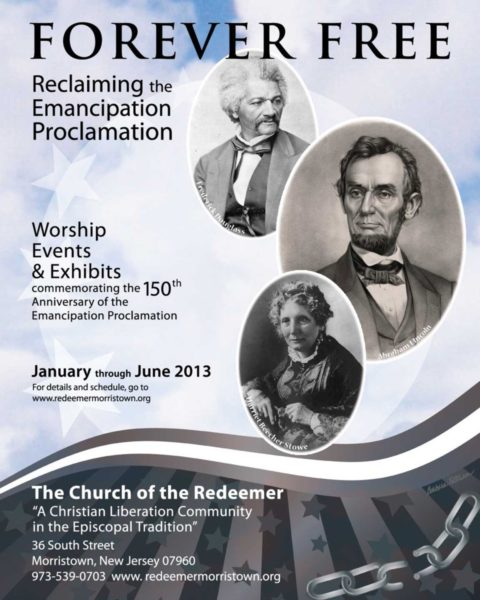 They first envisioned inviting a prominent speaker but then realized they didn’t want to limit themselves to one event. “It would be too hard to capture with just one event,” Black said.

Organizers expanded the program to three and finally to six months and still found they had more possible events than room in the schedule. They hope retired Diocese of Massachusetts Bishop Suffragan Barbara Harris, an African-American who was the first woman to become a bishop in the Anglican Communion, will be able to preach during the commemoration, Black said. Following the program, in September, a special screening is planned of “Traces of the Trade,” with Director Katrina Brown sharing insights from her family’s history as slaveholders in Rhode Island.

This year, Bethel’s pastor preached during the combined Jan. 20 service at Redeemer, where his church’s liturgical dancers performed, the two church choirs sang together and the readings included portions of the 1936 Federal Writers’ Project’s “Slave Narratives.” On Feb. 10, Black preached at a combined jazz worship service at Bethel a few blocks away.

Music is playing a prominent role in the commemoration. Dickerson led three adult forums on a social history of jazz, and the church’s Lenten series features meditations on five Negro spirituals.

Other artists are participating as well.

During a reception on April 7, abstract painter Nell Irvin Painter, emerita professor of American history at Princeton University, will present perspectives on global human trafficking as depicted in her artwork. The following week, Gwendolyn DuBois Shaw, associate professor of American Art at the University of Pennsylvania, will give an illustrated talk on portraits of African Americans in the 19th century and how they shed light on the understanding of interracial communities of the time.

Painter’s presentation falls on the church’s annual Holocaust/genocide remembrance. Likewise, other speakers were chosen to bring together emancipation themes with annual commemorations: the Rev. Nan Peete, sharing insights about being one of the church’s first female African-American clergy members, at the May 12 Women’s Journeys service; interracial couple Ernest and Louie Clay-Crew preaching on race and sexuality on LGBT Pride Sunday June 2; and the Rev. Canon Edward Rodman addressing the intersection of race and maleness during the June 16 Men’s Journeys service.

The confluence of emancipation and other issues is in keeping with Redeemer’s mission.

“We talk about ourselves as a Christian liberation community in the Episcopal tradition. We take that very seriously,” Black said. “The diversity that we’re proud of is not any one identifiable kind of diversity.

“We’re very clear that the interlocking systems of oppression have not done the church any good and that the way to change that is to model something else. And so [in] everything we do, from our worship to our education … we try to live our diversity out.

Through participating in “Forever Free,” she said, “I hope people have a better sense of history, a better sense of where we as a culture and a nation need to go and maybe even one thing they can do to help us get there.”