[Interchange: Episcopal Diocese of Southern Ohio] Community building, relationship and stewardship epitomize the goals of a new ministry in Cincinnati. All Saints Episcopal Church, Pleasant Ridge, celebrated the grand opening of Beans and Grapes in mid-December.

A coffee house and wine bar, Beans and Grapes began as a Pleasant Ridge business with a focus on the community’s own vision of its future. It was conceived following several years of community conversations, an assessment of the needs of Pleasant Ridge and a desire to be of help in fulfilling a vision for a safe, collaborative, neutral space that was neighborhood-centered and community-driven. 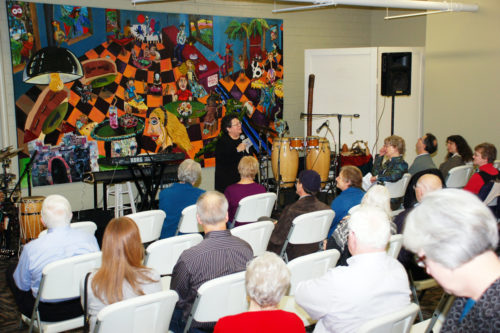 The Rev. Eileen O’Reilly welcomes a group in the community space, Greet and Gather. Photo: Interchange

Spearheaded by the Rev. Eileen O’Reilly and the congregation of All Saints, partnerships with people throughout the community and beyond grew through both individuals and corporations, private and public, who caught Pleasant Ridge’s vision for a different kind of community space.

When O’Reilly first arrived as rector of All Saints, she wanted to understand the local community and its needs. She spent nearly two years meeting with parishioners and people from the neighborhood. A distinct need soon became apparent: the need for a community meeting or gathering place.

“I kept hearing that there was no neutral location or space to meet, especially for evening meetings that extend beyond 8 p.m.,” said O’Reilly.

So, O’Reilly brainstormed ideas of how to provide a community space – as well as to find ways to pay for it. She looked at what the community already offered and what would suit it. The combination coffee house-wine bar seemed to be a great fit, especially after Pleasant Ridge was named an “entertainment district” by the city, O’Reilly said. That designation makes it easier for restaurants (as well as Beans and Grapes) to get liquor licenses.

Once the concept was in place, O’Reilly sought and received generous support from the Diocese of Southern Ohio, All Saints and the neighborhood.

The next step was to find the location.

“We went looking and looking for space,” she said. Ultimately they ended up at 6200 Montgomery Road, just a few blocks from the church.

After they completed the build-out on the property and ironed out all the other details, the business was ready to open. 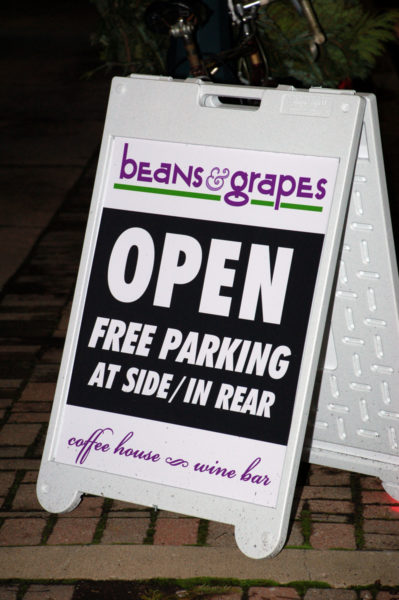 Growing Beans and Grapes
Beans and Grapes is an informal, neighborhood place where people can gather for a cup of coffee or glass of wine. It also offers pastries and cupcakes. Patrons can relax on comfortable couches and chairs, and local groups can conduct meetings in one of two rooms designed especially for this purpose. The charge for using the meeting rooms is on a sliding scale.

Beans and Grapes supports the community by offering the meeting rooms, builds relationships among neighbors as a gathering place and acts as a good steward in every facet of the business. A paid staff person and a volunteer usually are on hand to serve customers and tend the business.

The manager, Deanna Martin, was a campus minister at Xavier University when a friend told her about the job at Beans and Grapes.

“I had always wanted a restaurant, so I was really excited about Beans and Grapes and its mission,” said Martin.

One way patrons and workers are reminded of Beans and Grapes’ mission is a quote from the Dutch priest and writer Henry Nouwen that is featured prominently in its décor, seen by everyone who walks in the door: “Hospitality is a space around us that we create for others in which they can come be themselves, and discover who they are.”

Another way the center seeks to build and strengthen the local community is by showcasing local artists and musicians.

Grounded in stewardship
Acting as good stewards is also an integral part of Beans and Grapes’ business model, said O’Reilly.

“The wood floor was made from reconstructed rubber tires. The coffee we serve supports 20 coffee growers in Guatemala. We serve fair-trade chocolate,” she said. “Everything we’ve done has been with the idea that we are stewards, and we’re supporting community sources.”

Beans and Grapes tapped into Deeper Roots Development, a nonprofit organization that works with the coffee growers in Guatemala. They buy the coffee beans from Deeper Roots, roast and then sell it.

So far, the business at Beans and Grapes is doing well, said Martin.

“The coffee business is growing every day, and we’ve already had a lot of groups using the meeting rooms.”

These groups include Bible studies, diocesan staff for a retreat and a group committed to a raw-food diet.

“It’s about right relationships with growers, baristas, the community,” said Martin. “I love coming in and welcoming people.”

Future goals
Beans and Grapes, along with its community meeting spaces called Greet and Gather, are two of five business components under development. The nonprofit umbrella company for all five segments is called Sacred Grounds.

A call-a-thon was held to raise funds for Sacred Grounds on Jan. 26. An ongoing fundraiser allows people to purchase a brick and have a person or organization’s name placed on it for placement in a wall in Beans and Grapes.

In the future, Sacred Grounds plans to offer a school to teach people how to cater and cook (Learn and Create), a catering company whose initial purpose is to serve churches after funerals and for other social gatherings (Cook and Feed) and an incubator kitchen, where local artisans can make sufficient quantities of their food products for sale (Collaborate and Grow).

These segments are knit together by their commitment to service and community, said O’Reilly.

“The catering company will eventually supply food for the coffee shop,” she said. And these businesses will result in additional benefits for the community in the form of new jobs and educational opportunities for kids in the neighborhood.

It all comes back to community, building relationships, and stewardship, and all for the purpose of serving God, said O’Reilly. “Everything we’re trying to do, we’re doing for the glory of God.”

This article first appeared in the December 2012-January 2013 issue of Interchange, the newspaper of the Episcopal Diocese of Southern Ohio.