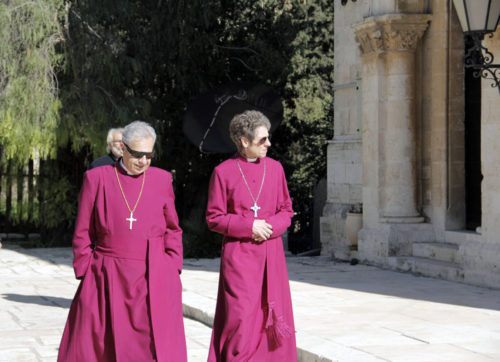 [Episcopal News Service] In 1873 the Anglican Church built St. Paul’s Church, its second church in Jerusalem, to serve Arab indigenous Christians, which it did until 1948 when most Arabs fled east to Jordan.

With the exception of a special service in 1961, the church, located on Tribes of Israel Road neighboring an Orthodox Jewish section just west of the Green Line, not more than a couple miles from St. George’s Cathedral in East Jerusalem, remained closed.

The “Green Line” refers to the lines of demarcation set between Israel and its neighbors following the end of the 1948 Arab-Israeli War.  The boundary divided Jerusalem, with the western portion of the city falling in the sovereign territory of Israel while the eastern portion fell within the Hashemite Kingdom of Transjordan (later Jordan), a situation that prevailed until the Six Day War of 1967.

In 2007 the Episcopal Diocese of Jerusalem decided to renovate – the church had been set on fire three times – and reopen St. Paul’s, not because the diocese was in need of another church, explained the Very Rev. Hosam Naoum, dean of St. George’s Cathedral and canon pastor to St. Paul’s Arabic-speaking congregation, but because its existence sends an important message.

“It gives a sign of hope and light and it says that the church is there to look after the living and the dead stones,” said Naoum, adding it also says: “We are here, alive and present and will continue to be.”

The hope, said Anglican Bishop in Jerusalem Suheil Dawani while giving Presiding Bishop Katharine Jefferts Schori a tour of the church in late December, is that it becomes a center for reconciliation.

And the Christian voice is often regarded as one of peace, justice, forgiveness and reconciliation.

It is the Christians’ responsibility, Naoum said, to “promote self-respect and tolerance and mutual affection to make that happen,” which the Episcopal Diocese of Jerusalem demonstrates through its 35 health and education institutions, many of them in the West Bank, Jerusalem and the Gaza Strip.

The life-giving diocesan institutions operate against a backdrop of the decades-long Israeli-Palestinian conflict, and the Christian minority is increasingly emigrating in search of a better life and better opportunities overseas. Meanwhile, the peace process has stalled, with Israeli and Palestinian leaders each citing the other’s actions as the source for blame.

But it is with the support of the Episcopal Church and organizations like the American Friends of the Episcopal Diocese of Jerusalem that Episcopalians also can promote that peace and justice in Israel and the Palestinian territories.

“I think it’s a challenge to us, particularly in the United States’ context, and also in Europe, to see ways in which Muslims and Christians in particular live and work together and are members of the same communities,” she added.

St. John’s Episcopal School in Haifa is one such example of community: the school has educated generations of Muslim, Jewish and Christian children and has been officially recognized by the Israeli school district not only for its high-quality education but for its Peace-Education project, which deals with raising awareness among students about their rights, serving the community and conflict resolution..

Haifa, Israel’s northern-most city on the Mediterranean Sea, stands out as a model of diversity in which Jews, Christians, Muslims, the Druze, Baha’i, and others live in close proximity in integrated communities.

In late December, traffic came to a crawl in Haifa, where Christians, Muslims and Jews took to the streets to observe the “Feast of Feasts,” a celebration of religious holidays organized by the city’s mayor and heralded as a model of peaceful coexistence in Israel. 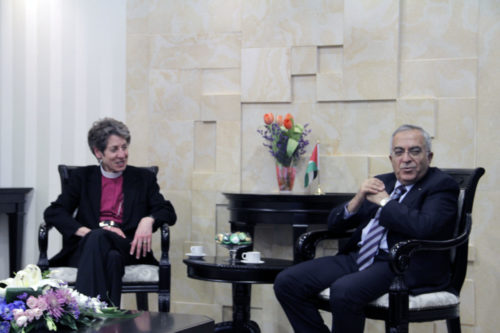 “It’s clear that there are people of goodwill in each of the three religious traditions and each of the political entities, who want peace, who want a coexistence, it’s the hardliners in each party that are the difficult ones, as they are in our own context,” said Jefferts Schori, reflecting on her visit to the Holy Land. The presiding bishop visited Israel and the Palestinian Territories over Christmas and New Year at the invitation of Dawani. In addition to visiting diocesan institutions, the trip included meetings with British and American dignitaries, Prime Minister Salam Fayyad of the Palestinian National Authority, and the ecumenical Heads of Churches of Jerusalem. (Click here for a story on the presiding bishop’s meeting with the Greek Patriarch.)

The presiding bishop last visited the Holy Land in March of 2008, prior to the last major conflict between the Israelis and Palestinians, when in late December of that same year the Israelis launched three weeks of air and ground assaults in response to repeated rocket fire by Palestinians in Gaza. Some 1400 Gazans and 13 Israelis (four from friendly fire) died in the attacks.

“I see some progress here from the last time I was here both economically and politically. There is at the same time a sense of hope and a sense of despair with the Palestinians, eminently understandable. I think that the issue still is that the United States government needs to find a way to encourage the hardliners to soften up and find a mediated resolution. The Palestinians aren’t going anywhere, the Israelis aren’t going anywhere. They need to find a way to coexist for their own survival, for everyone’s survival,” she said.

The latest visit came just more than a month after the most recent escalation of violence between Israeli forces and Hamas, the Islamist militant Palestinian party that has controlled Gaza since 2007. Closely following the cease fire, the United Nations General Assembly – with the support of 138 nations – voted to admit Palestine as a non-member state.

“Politically, I think this is a period of great frustration that the peace process has been stalled for a considerable amount of time and does not necessarily show signs of resuming anytime soon, particularly as American political leadership around the Israeli-Palestinian conflict remains uncertain,” said Baumgarten.

Nevertheless, Baumgarten cited recent statements and actions by the Obama Administration as “signs of hope.”

“Even as facts on the ground appear to complicate the future of a two-state solution, and political positions on all sides remain entrenched, we can see hope in the fact that the newly re-elected American administration has indicated it wishes to devote new political capital to the resumption of negotiations between Israelis and Palestinians,” said Baumgarten.

Jefferts Schori recently joined with other American Christian, Jewish, and Muslim leaders in warning the White House and congressional leaders that “twilight has fallen on the possibility of a two-state solution to the Israeli-Palestinian conflict,” and urging “immediate, sustained U.S. leadership before darkness falls on the hopes for a peaceful resolution.”  (The full statement is here.)

General Convention in July 2012, through Resolution B019, expressed its “regret at the lack of progress in negotiations between Israelis and Palestinians toward a just and peaceful resolution of the longstanding conflict”; called for an end to the violence and reaffirmed the church’s “commitment to a negotiated two-state solution in which a secure and universally recognized State of Israel lives alongside a free, viable, and secure state for the Palestinian people, with a shared Jerusalem as the capital of both.”

“Episcopalians can be leaders in galvanizing American support for a just and lasting peace by telling the story of the Christian Churches of the Holy Land and their leaders, including the Episcopal Diocese of Jerusalem,” said Baumgarten.    “As intractable as political dynamics may seem at any given moment, the Christians of the Holy Land are serving as focal points for tangible and meaningful reconciliation as they stand boldly for a vision of peace that draws people from the margins to a place where agreement, compromise and peace with justice can be found,” said Baumgarten.

The resolution also calls on the church to support “Jewish, Muslim, and Christian study on peace with justice in the Middle East,” and for the Episcopal Church, and its dioceses and partners, to engage actively in the discipline of advocacy, education, and prayer for peace between Israelis and Palestinians, as well as the provision of humanitarian aid that promotes peace and reconciliation, Baumgarten added.

Episcopalians, Edmunds said, can assist the Diocese of Jerusalem by praying for the Christians who live in the Holy Land. “They’re the stewards of the faith; they’re the ones who keep the churches open.” 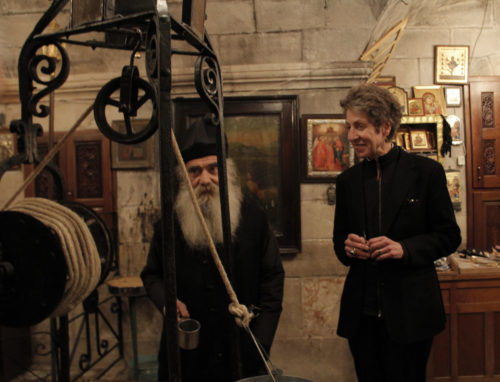 For those, he said, who can make a pilgrimage to the Holy Land, it’s important to go home and share their stories and experiences; financial support keeps the institutions going, which is important to show that the church is alive and healthy and is “life affirming and peace building” and a symbol of “hope” in a place where hope and peace are in short supply.

It’s also important, for those who visit and for those who are interested in building peace in the Holy Land, to educate themselves about the people, the complex history and the politics, Edmunds said.

One popular misconception, for example, is that despite the fact that Christians have been in the Holy Land since the first Pentecost, people, especially those in the West, tend to think that Palestinian Christians have converted from Islam, which is not the case, said Edmunds.

Palestinian Muslims and Christians in the Holy Land share a language, culture and customs, and a parallel history; it’s the rise of fundamentalism among Christians, Muslims and Jews, and “exclusivity thinking that is so damaging.”