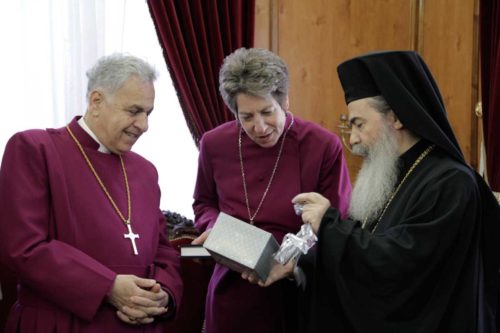 [Episcopal News Service] During a recent visit to the Holy Land, Presiding Bishop Katharine Jefferts Schori was received by the Greek Patriarch of Jerusalem, His Beatitude Theophilos III, in what was a historic meeting.

“It was the first time I’d been invited into that conversation. I meet with the Greeks in the U.S., but I think it was a profound act of hospitality on his part,” said Jefferts Schori. “The Orthodox don’t think that women should be ordained.

“He was enormously gracious and gave us quite a long time in conversation. I think because he understands that the Episcopal Church is a very significant partner, and a church that is in solidarity with his colleagues here. And that we have a very important role to play in terms of motivating our own government and people in the United States. I think we also have a role to play in motivating Episcopalians in other parts of the world, particularly in Europe. I think we could have a larger voice there that might have an impact.”

The Greek Patriarch is traditionally referred to as the bishop of Jerusalem in recognition of the leadership role his office plays in ecumenical, interfaith and political responsibilities on behalf of the members of the indigenous Christian churches.  Bishop Suheil Dawani, bishop of the Episcopal Diocese of Jerusalem, is also referred to as the Anglican Bishop in Jerusalem as he is the Anglican Communion representative among the ecumenical leaders in the Holy City, said said Alexander Baumgarten, director of the Episcopal Church’s Washington, D.C.-based Office of Government Relations

“This is the first time I am aware of that a patriarch of Jerusalem has officially and ceremonially received the head of a Christian church who is also an ordained woman. I think it stands as a testament to the great bonds of affection between the Greek Orthodox community in Jerusalem and the Anglican tradition of Christianity, including Bishop Suheil and Bishop Katharine.”

In the United States, the Orthodox churches, along with the Roman Catholic Church and the Lutheran Church, “share with the Episcopal Church an official intuitional tie to the historic Christian communities of the Holy Land.  Together, those churches represent some of the Episcopal Church’s closest partners in working toward a just, peaceful resolution to the Israeli-Palestinian conflict,” said Baumgarten.

“I hope the presiding bishop’s meeting with the patriarch might be seen by many in the United States as an invitation to stand in unity, across Christian traditions, with the historic churches of the Holy Land and their leaders in working toward a just and peaceful two-state solution to the Israeli-Palestinian conflict,” he said.